Jim Jefferies explores how the U.S. and North Korea ended up on the verge of nuclear war

"A couple of insecure egomaniacs with bad hair and rich fathers" 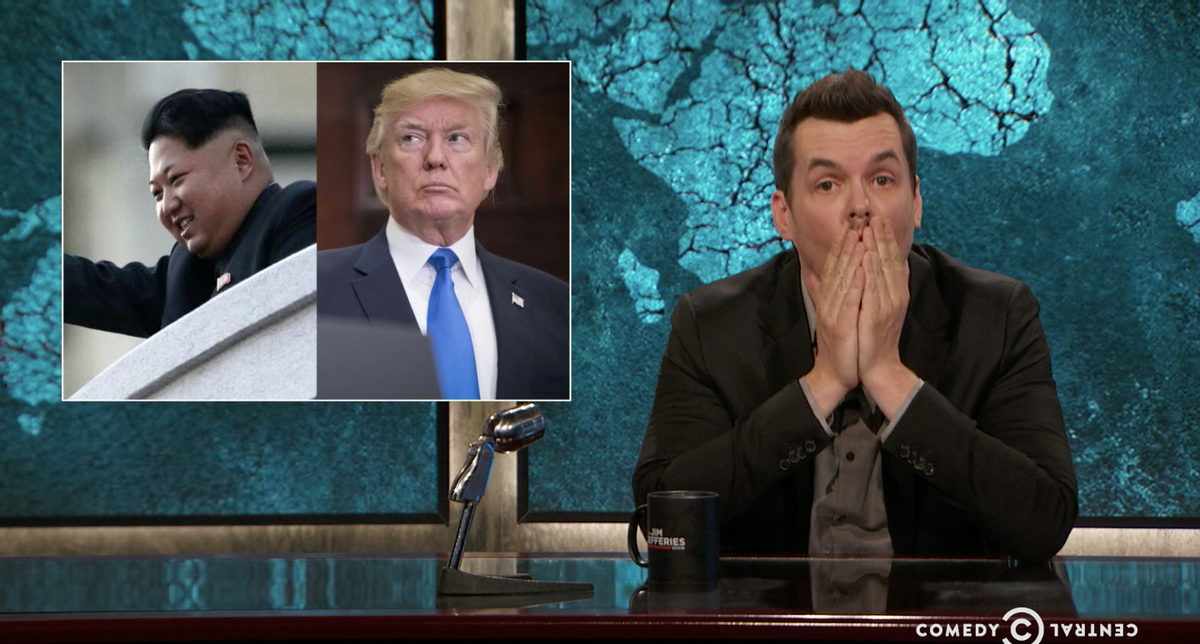 It appears President Donald Trump has only added to the tension between the U.S. and North Korea. No need to worry just yet, sage diplomat Jim Jefferies said on his show Tuesday night.

"This week the United States started preparing for a nuclear war with North Korea. Don't worry, it's not happening yet. We're just on the verge of it. You can still enjoy the weekend and maybe Monday and Tuesday," he joked.

The host of "The Jim Jefferies Show" explained to his audience that the conflict on the Korean Peninsula dates back to the end of World War II, when the U.S. and Soviet Russia split the country into two.

"The U.S. and the Soviets were like two parents splitting up a family," Jefferies said. "One kid was raised by Russia, the world's drunk, divorced dad. That kid turned out all fucked up. The other kid was raised by mom, capitalist America. It's super dependent and it can't take care of itself, but it's also a lot more fun."

After World War II, the U.S. was soon baited into war with the communist North, a three year struggle with little results. The U.S. did not even sign a peace deal with North Korea.

"No peace treaty? You mean we just decided to stop fighting and go home? No wonder they are pissed at us," Jefferies said. "We fucked them for three years, then totally ghosted them. Then we moved on to Vietnam. America has a serious Asian fetish."

Fast-forward to the Trump administration; America's relationship with North Korea is reaching an all-time low. Even Gen. James "Mad Dog" Mattis has called a potential war with North Korea "most catastrophic." Mattis has advised the U.S. to exercise calm diplomacy when dealing with the Kim Jong-un regime.

"When a guy called 'Mad Dog' tells you to chill out. Chill the fuck out," Jefferies said.

"There are no good options, especially when you think about who's in charge," the Australian comedian added. "A couple of insecure egomaniacs with bad hair and rich fathers."

Pleading directly with Kim, Jefferies tried some reverse psychology on the North Korean leader. He told him that if he were to bomb America, the last city he should hit would be Reno, Nevada. "It's absolutely vital to our nation's security," he said, before providing the latitude and longitude coordinates to the city.