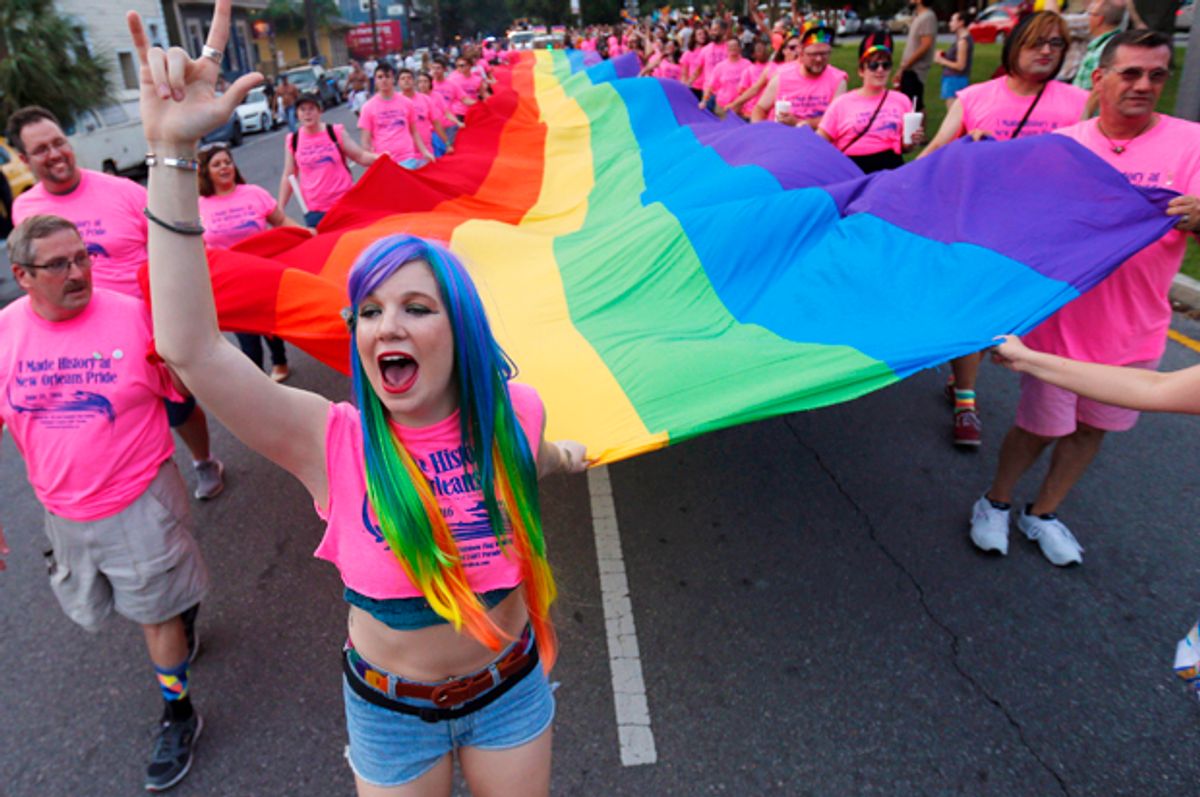 Back in June, in the very first week of LGBT Pride Month, Rep. Ralph Abraham's, R-La., subscribers read in his newsletter that their congressman was working diligently to restore congressional authority over how the U.S. government can define “sex” and “gender.” Abraham is one of five co-sponsors — all Republican —for the House Resolution formally named the “Civil Rights Uniformity Act of 2017.” The resolution is a response to a controversial Obama-era mandate issued last September that withheld federal funds from school districts if they prohibited students from using bathrooms or locker rooms that matched their gender identity, regardless of their biological sex.

If this resolution passes, "sex" or "gender" could not be interpreted to mean "gender identity” at the federal level. It also requires "man" or "woman" refer exclusively to a person's genetic sex when interpreting certain federal laws or regulations.

The bill was referred to the Subcommittee on the Constitution and Civil Justice last month. It now awaits first debate in the Civil Justice Committee, where Republicans outnumber Democrats 8-3. If it passes there, it goes to be voted on by the House and Senate, which are both majority GOP.

The term “gender identity” has been a contentious topic of debate across the country, and Louisiana is not immune. At the state level, Louisiana’s legislature this year shot down a bill that would protect LGBT residents from employment discrimination —  just as it has repeatedly for the past 24 years, as different lawmakers have tried time and again to pass it through a majority Republican body. In July, Rep. Abraham declared he backed Trump's proposed ban on transgender men and women in the military "100 percent."

Louisiana Gov. John Bel Edwards, the lone Democratic governor in the Gulf South, issued a statewide executive order last year that would have protected state workers on the basis of sexuality and gender identity. But that order was challenged by the state attorney general and more than a dozen Republican state lawmakers, partly because they were unclear on what the term “gender identity” meant. The order was eventually ruled unconstitutional in court — not for its “gender identity” language but for alleged governmental overreach. Edwards and the order’s main challenger, state Attorney General Jeff Landry, head to an appeals court in August to rehash the issue.

Right now, there is no federal law protecting workers on the basis of sexuality or gender identity. Without a state or local law in place to prevent it, it is entirely legal to be fired or denied a job if the employee or applicant is gay, transgender or some other member of the LGBT community.

But some Louisiana lobbyists and lawmakers have expressed willingness to change their position against changing state law to protect LGBT workers, as long as federal law is changed with it.

President Barack Obama issued an executive order similar to the Louisiana governor’s in 2014. It protected federal workers based on sexual orientation and gender identity. President Donald Trump revoked that order in March as part of his “two-for-one” pledge to eliminate two federal regulations with every new one introduced.

New Orleans Mayor Mitch Landrieu’s office estimated this past spring that New Orleans gained $100 million for hosting the 2017 NBA All-Star Game on Feb. 19. The city was the NBA's second choice to host the lucrative event, which had local hotels at 99 percent occupancy that weekend. Charlotte, N.C., had been the first choice. But it was bumped off the list because of a later-repealed state law that forbid transgender people to use the bathroom of their identified gender -- what is now famously known as the controversial “bathroom bill.”

In 2017, 16 states have considered, but not passed, something similar. Louisiana was not one of them. Reports suggest the NBA All-Star business boom contributed to the state’s lack of one this year.