I'm in love with her new movie — and it hasn't even been shot yet! 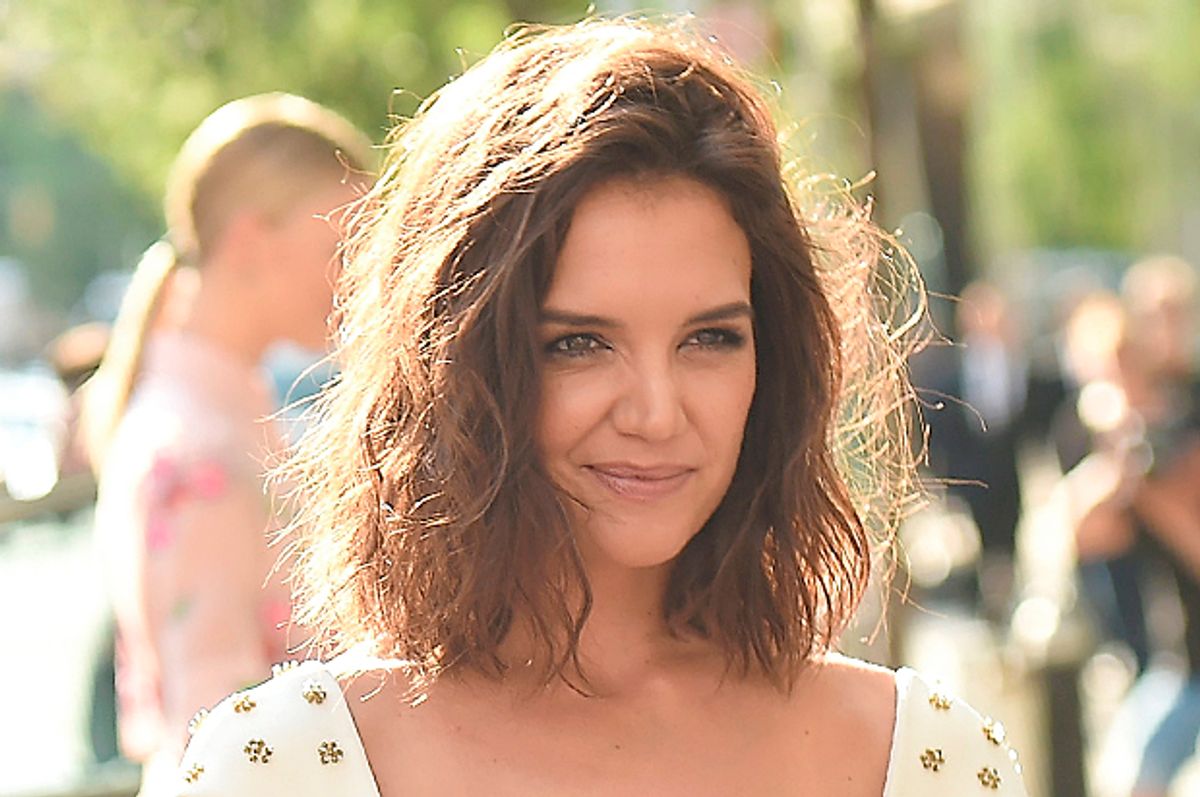 So long "There Will be Blood," "The Godfather," "Last of the Mohicans" — news dropped yesterday that there's an adaptation of the 2006 best-selling mystical self-help book "The Secret" starring Katie Holmes in development. It's already my favorite movie.

Oh, but you say, you can't feel that a film that has not shot a single frame yet can be demonstrably, objectively better than "The 400 Blows" or "Tokyo Story." Well, what if I told you it was being directed by Mr. Andy Tennant, the man behind the camera on such works as Jennifer Aniston and Gerard Butler's "The Bounty Hunter," Reese Witherspoon's "Sweet Home Alabama" and Will Smith's "Hitch"? What then?

What if I added that Tennant not only directed the Matthew McConaughey-Kate Hudson vehicle "Fool's Gold," but wrote it as well? Wouldn't you have to pause for a moment and think? You would, wouldn't you?

And who's writing this, you wonder? Why, it's Bekah Brunstetter, who's already made you cry through her work on "This Is Us".

While you sit with that, I'm going to give you the synopsis. The Hollywood Reporter says that the film will, "follow a young widow with three children who hires a handyman to fix her house during a terrible storm. As the handyman grows closer to the family, he shares his philosophy of believing in the power of the universe to deliver what we want, but the widow soon realizes he carries a secret connection to her past." There's a secret in "The Secret"! Are you on board yet?

That's right, a sexy, rugged handyman with a secret will share the secret of "The Secret" with the charming, plucky actor who starred in two completely different movies called "The Gift," one about an elderly pianist on a spiritual journey and another about a woman with ESP getting wrapped up in a murder mystery. Her character will be called either Iris, Laura or Sara with no "h".

What is this secret that's in "The Secret," the book that sold over 30 million copies worldwide, has been translated into 50 different languages and was once hawked by Oprah? Reductively, it's the idea that if you focus and wish on something hard enough, The Universe will provide it for you. It's like praying without God or Jesus or any of that complicated stuff! What could be a more inspiring basis for a groundbreaking film than a mystical self-help "law of attraction" tome created by an Australian television producer and informed by the great work "The Science Of Getting Rich"? What indeed?

Just imagine the possibilities of Holmes' beautiful, anxious mother —  who wears mostly sundresses and keeps her hair in an artfully messy ponytail — explains to the charming, mysterious handyman in his white T-shirt and Levis how she can't afford health insurance for her autistic son, crying infant and sarcastic-yet-preciously-intelligent teen girl since her husband died in that refinery explosion. See him and his glistening forearms as he slides out from under the water heater he was fixing, softly takes Holmes by the wrist, and places her delicate hand on the cover of the unabridged, 10th-anniversary edition Rhonda Byrne's "The Secret," available from Atria Books for $13.99 in hardcover at Amazon. Do you feel something? I feel something.

Imagine later as they look out toward the setting sun from her tumbledown back porch, their shoulders achingly close, as she closes her eyes and says, "Sometimes, I think happiness is just for other people." Feel the tension as he slides his strong, workingman's hands up her neck, gently placing an earbud in each of her ears and shares with her the sounds of Rhonda Byrne reading "The Secret" in audiobook format, available from Simon & Schuster for $23.93 at audible.com. Shivers. This is what cinema is made for.

I can't promise you that the handyman — his work done and her failing, storm-battered farm turned into a thriving, boho B&B — will nod knowingly at Holmes' character in a bittersweet finale as he drives off in his dusty, powder-blue 1978 Ford F-150 to inspire more conventionally attractive women. I can only promise you that if he does, she'll smile back at him with a tear in her eye, her long fingers cradling "How the Secret Changed My Life" by Rhonda Byrne, available for $9.99 in hardcover at Amazon close to her breast.

If you're not breathless right now, I don't want to know you.

Now, with the project so early in development, there are questions to be answered here. Will the rugged, handsome handyman be played by Matthew McConaughey, Eric Bana or "Felicity"'s Scott Speedman? Will the title song come courtesy of Sheryl Crow, Jewel or the Dixie Chicks? Will her dog be a border collie or a black lab? These are things I need to know.

The one thing that is clear is the nature of the "secret connection" the handyman shares with Iris/Laura/Sara: He's the reincarnation of her dead husband. See, more so than a new roof, proper health care for her children, money, a B&B with ponies or any of that, the one thing Holmes' character really wanted was just one more day — just one! — with the love of her life. Through the power of visualization, the universe gives it to her.

God I can't wait to see this movie.