Reagan was elected as a tough-talking foe of diplomacy, and then an ABC special turned him into a peacenik 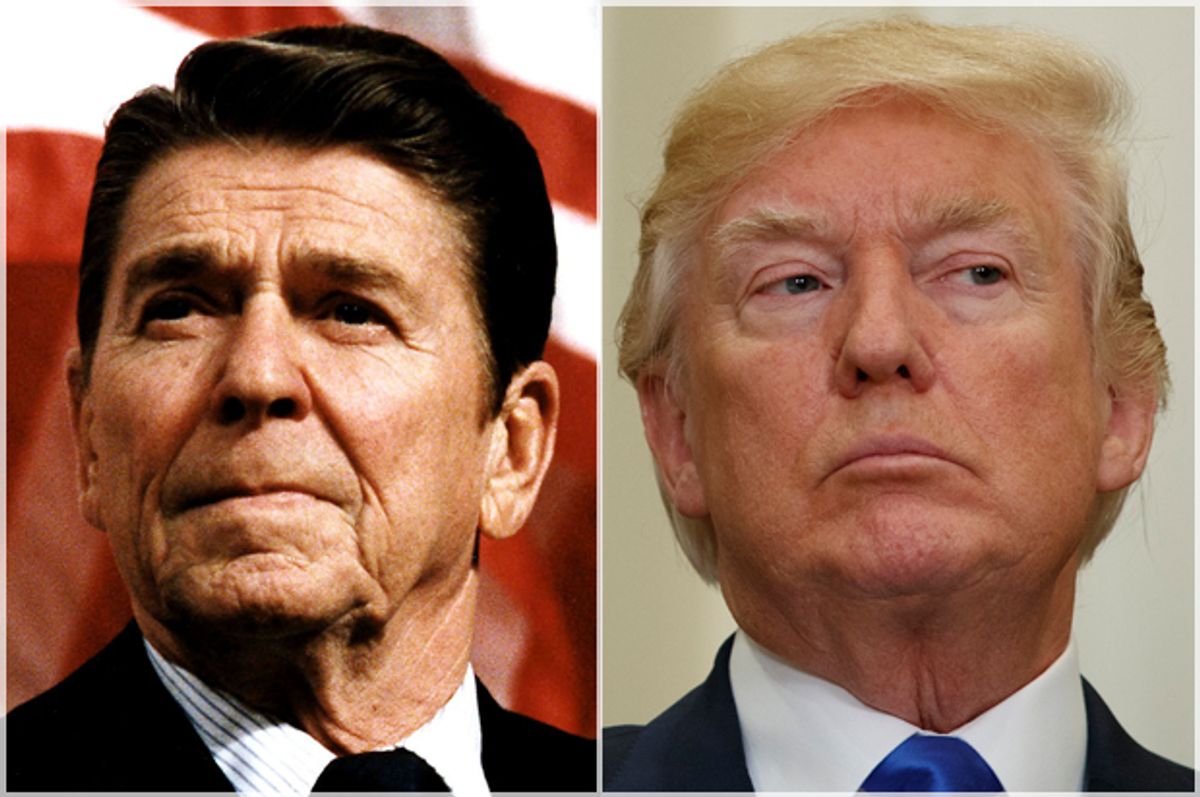 After suggesting that his explosive threat to bring down “fire and fury” on the regime of North Korean dictator Kim Jong-un was not tough enough, President Donald Trump appeared to push the U.S. even closer to the nuclear brink early Friday morning.

This tweet comes after Trump has threatened to break with a long bipartisan commitment to disarmament, calling for a new “arms race” to “greatly strengthen and expand” our nuclear stockpile. That the U.S. president is threatening nuclear annihilation in an early morning tweet is certainly unsettling -- Trump’s rhetoric on North Korea may even appear unnaturally bellicose -- but it is hardly unprecedented.

Ronald Reagan’s rhetoric was strikingly similar to Trump’s during the 1960s and 1970s, when the former Hollywood actor became a rising star on the American right. While his comments on nuclear weapons weren’t as incoherent as Trump’s, Reagan built his career on conservative bluster about the evils of communism, and opposed the move for a joint nuclear freeze between the U.S. and the Soviet Union

Reagan’s Cold War policy initially relied on an overly simplistic frame of the world and bombastic rhetoric backed up by military might. He was elected president in 1980 as the preeminent opponent of detente. But by the final year of his two terms in office, Reagan was touring Moscow with Mikhail Gorbachev, the last Communist leader of the Soviet Union.

Thank “The Day After” for the remarkable transition of a warmonger into a peacenik diplomat.

Like Trump, Reagan entered office set in his ways -- he was the oldest incoming president in American history, at least until the current one. Like Trump, the retired movie star preferred the silver screen to dense policy briefings. “Reagan processed a lot of history through movies,” presidential historian Douglas Brinkley noted. One movie in particular, the memorable 1983 TV drama “The Day After,” eventually caused him to realize that avoiding diplomacy with the USSR was a mistake. Here's the entry from Reagan’s diary on Oct. 10, 1983:

Columbus Day. In the morning at Camp D. I ran the tape of the movie ABC is running on the air Nov. 20. It’s called “The Day After.” It has Lawrence, Kansas wiped out in a nuclear war with Russia. It is powerfully done — all $7 mil. worth. It’s very effective & left me greatly depressed. So far they haven’t sold any of the 25 spot ads scheduled & I can see why. Whether it will be of help to the “anti nukes” or not, I can’t say. My own reaction was one of our having to do all we can to have a deterrent & to see there is never a nuclear war.

As surreal as nuclear negotiations conducted on Twitter may seem today, it was a movie shown on broadcast television that made Reagan realize that without direct diplomacy between the White House and the Kremlin, a worldwide disaster was not just possible but likely.

“A nuclear war can never be won and must never be fought,” Reagan would go on to declare in a 1983 speech to the Japanese parliament. “I will not be deterred,” he said, receiving a standing ovation. “The United States will never walk away from the negotiating table. Peace is too important.”

While many factors contributed to the collapse of the Soviet Union, including Gorbachev’s policies of perestroika and glasnost, Reagan’s ideological shift --and his rhetorical reversal -- unquestionably helped end the Cold War.

To this point, Trump has so far only shown interest in boosting our nuclear arsenal. During the campaign, he blithely wondered why our military was so reluctant to use nuclear weapons, and made clear he had no idea what the "nuclear triad" was. At the moment, there appears to be little to prevent our notoriously impulsive president from launching a nuclear attack in a fit of pique. He’s followed up his rhetoric with amped-up bombing campaigns in Iraq, Afghanistan and Syria.

But the Republican president to whom Trump is often compared walked the U.S. to the brink of catastrophe and was brought back to reality, in part, by an ABC special. If history is any lesson, Trump’s bombast and reckless tweets may be less of a concern than his habit of relying on the fabulists and warmongers of Fox News for his first briefing every morning.