"My entire life I’ve been trying to find an identity something bigger than me." Singer Nakhane Touré on his impressive screen debut in "The Wound" 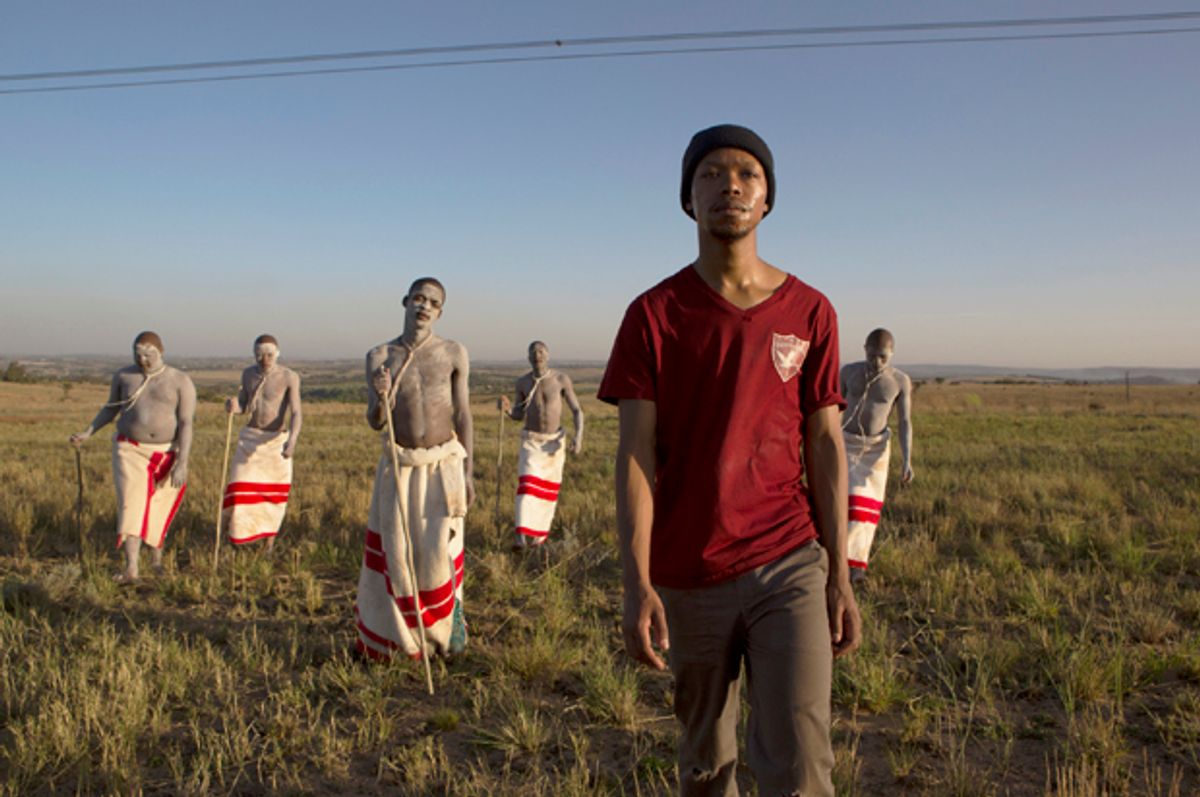 Nakhane Touré — who just goes by Nakhane now — is an openly gay South African musician, author, and actor. “If we read history, you see you had to do a few things to be considered talented. You sang, danced, and acted, so it was never mutually exclusive,” he demurs.

Nakhane gives a remarkable performance in his film debut in “The Wound.” He plays Xolani, a caregiver who helps initiate Kwanda (Niza Jay) into manhood. Xolani also reconnects, sexually, with Vija (Bongile Mantsai), a straight caregiver, whom he loves.

Nakhane gives such a transparent performance, viewers will understand Xolani’s every thought and feeling — even when he is silent and expressionless, which is much of the time.

While his acting career may be getting started, Nakhane is best known as a singer. His music is soulful. “Christopher” a single from Nakhane’s “Brave Confusion” album, is an irresistible upbeat pop song. He is now putting the finishing touches on his next album, forthcoming in 2018.

The performer spoke with Salon about “The Wound,” his music, and being openly gay in South Africa.

What appealed to you about “The Wound”? What made you want to make this film?

I didn’t. It was one of those things that came to me on a silver platter with spikes. Initially John [Trengove, the director] asked me to do the music for the film. But I was interested in just using voice to communicate the emotional landscape of the characters. A few weeks later, John asked me to audition for the role of Xolani. The last time I acted was in school; my medium was going to be music. I didn’t know if I had the talent to act. John said, try it out, and if you’re not good, I’ll let you know. But the moment there is doubt — that puts such a fire in my ass — I’m going to show you. I went to a clothes market and bought the clothes Xolani would wear. I observed the guys like Xolani: how they walked, talked, did they touch their friends, and if so, how? So it became classical method acting, but I was also quite nerdy and bought a book about acting. I used trauma and “authenticity” — but I hate that word. I always worry when people use that word — I prefer “truthful.” I found myself being cast as Xolani.

Once cast, what decisions did you make to play Xolani?

I’m a very driven person. I have to do something excellently or not at all. I called it the “Samuel Beckett Performance,” where everything was gong to be minimal, but each minimal thing you do has to mean something. I knew Xolani was a private, closed off person, but he was sensitive. I’ve known people like that. They seem to be OK, but their eyes communicate so much more.

I observed a quiet guy I know. I wondered what his internal monologue is. He’s always thinking, whether he is speaking or not. I was invested in his body language and his eyes.

How familiar were you with the Xhosa rituals of circumcision and manhood and the initiation ritual depicted in “The Wound”?

Every boy who grows up where I did goes through initiation. It’s not a question. You are going to do this at 18. I did it. Which is surprising to people who doubt I did it — how could I go to initiation and do the film? It made me want to do the film. I was an “other” in that space.

You are an openly gay South African. What observations do you have about socialization and ostracism of men, gay and straight, in South African culture — a theme addressed in the film?

It’s so complicated because it’s about the people you spend time with. We legalized same sex marriage and adoption. There are spaces where you can be free and as queer as you are without being hurt and areas where you wouldn’t dream of that. Your identity is split in two. Most [queer people] are not from Johannesburg but smaller towns and cities where being queer isn’t very accepted. So a lot of us have this unspoken thing where in Johannesburg and Cape Town you are free and who you want to be, and then you go home and you are hyper-masculine men.

Can you talk about your coming out?

I came out when I was 17, to friends, and 19 to family. It was complicated. My mom was a very devout Christian. So my relationship with coming out was very on and off. I was taken to a prophet. I became devout and conservative to quell my homosexuality to the point that I even started preaching and talking about myself, about how one can be cured. Around 25, I realized I was lying, and I left the church. Consequently, I got excommunicated.

I picked up James Baldwin when I was 19. He was a huge influence on me. I read “Just Above My Head.” I was represented. Black queer people were never represented in art. It’s all blond, blue-eyed, white boys. I discovered Michael Cunningham, and here’s James Baldwin, and man, did I see myself — even though he’s from a different continent. There’s that line in “The History Boys” — you read a book, and a hand reaches out and pulls you in, and you feel you are venerated for the first time in your life. With James Baldwin, I understood I’m not perverse for being queer. Everything in media when I grew up was that I was perverted and needed to change myself and be seen as normal. And Baldwin said, Fuck that, there’s nothing wrong with you! He was so brave to be out gay person in the 1950s. I can’t imagine how difficult it was. Not only are you hated by conservative white America, but there’s a segment of your own people who want to cut you out like a cancer.

What are your thoughts on the film’s “love triangle”?

More than anything “The Wound” is a love story. It’s a story about how Xolani is willing to do anything so that his relationship with Vija continues. He’ll go to any length — as we see in the last scene. The real test is when he meets Kwanda, who shows him the possibility of someone who deserves to be loved and appreciated. Xolani and Vija are friends, and close — but the emotional closeness is not there; it’s one-sided. Although there is an attraction between Xolani and Kwanda, he is not willing to risk what he’s been hiding for years for a fling with an 18 year-old boy from a different class.

What character do you identify with in “The Wound”?

I would say, depending on the day and what I had to drink the night before and who pissed me off five minutes ago, I’ve been all three of those people. I’ve been passive and have had to behave a certain way. If my hands were jazzy, I had to pull them back in like Xolani. But I also understand the moment when I knew I couldn’t change myself, I was Kwanda. But there are days where I’ve been a man like Vija — and patriarchy has given men a choice to be who they want when they want, depending on the people around.

You changed your name to Nakhane Touré, and then recently dropped the Touré. Can you talk about your off-screen identity?

I dropped Touré because my entire life I’ve been trying to find an identity something bigger than me. At 17, I was adopted by my aunt and her husband, and they changed my surname to theirs. Before that, I had been passed around from one person to the next. When I finally had a home and changed my surname, I felt a sense of belonging. My music was pan-African, so I named myself Touré. But I’ve been asking myself who am I the past two years, and I’m confident who I am now, and I don’t need to belong to anyone. My name is enough.

The video of your song, “The Fog,” is very much reminiscent of “The Wound.” Was that deliberate?

The director and I spent a lot of time talking about what it would look like. We knew we wanted claustrophobia; it’s about depression, and we wanted to embody what one feels when one is sinking and climbing out of that hole. We stripped it back to make a one-take video all about the performance. When we shot it, we knew it was a comment on initiation and ritual, but art can be read in so many ways. We wanted it to be opaque, so people could come up with their own definition of what it was. One woman took it to an X-rated space and thought it was cum. Fuck it. People can think what that want. We made something powerful that people will love or hate.