Bernie Sanders, the socialist revival and the unexpected upsurge of millennial Marxism 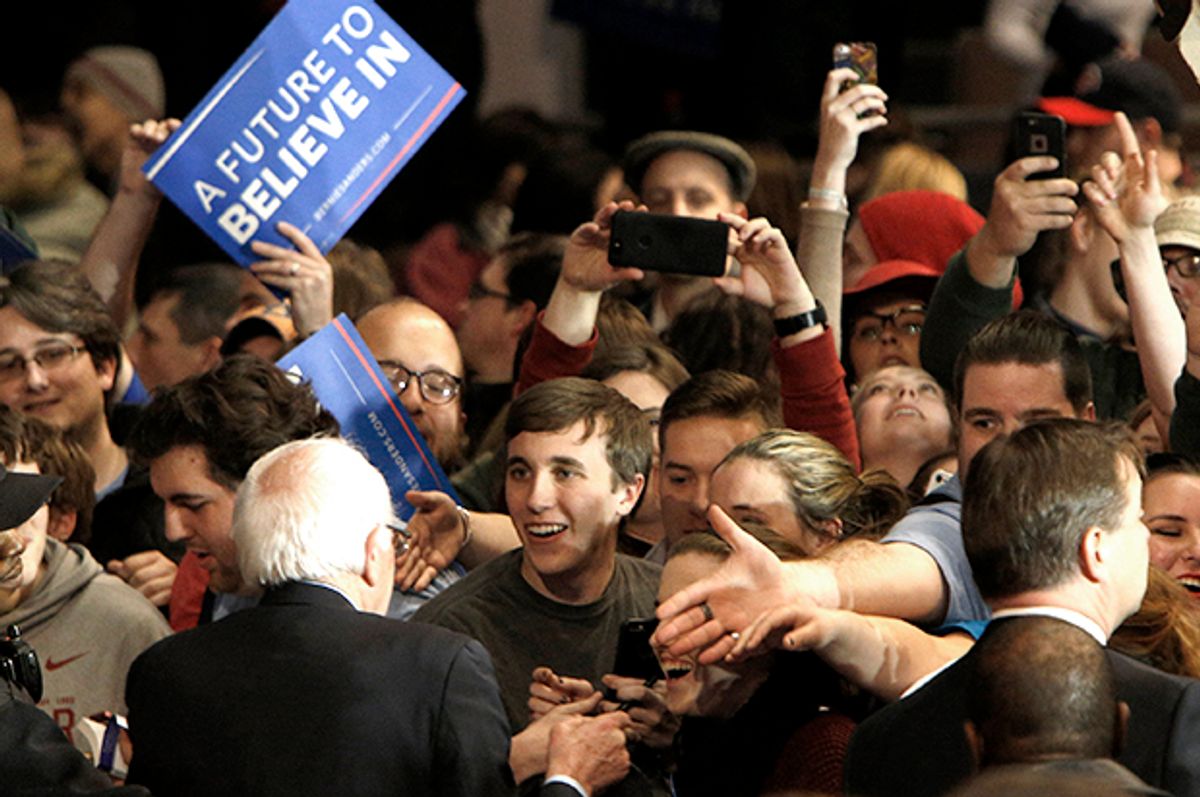 Since his grassroots presidential campaign took the world by storm last year, Sen. Bernie Sanders has been widely credited with bringing socialism back into the mainstream of American politics and introducing an entire generation to left-wing politics. As a major presidential candidate who unabashedly identified as a democratic socialist, Sanders essentially resurrected an idea that has been considered off limits in our political discourse for many decades: that there is an alternative to capitalism and the status quo.

This radical idea has become less taboo in recent years, and today an increasing number of millennials say they reject capitalism, while a majority of Americans support “socialistic” policies like universal health care (for the first time in a long time, single-payer is gaining mainstream momentum). Clearly, Sanders deserves the credit he has received for shifting the Overton window and reintroducing a form of left-wing class politics to America. It is safe to say that no single person has done more to revive the American left than the Vermont senator.

But Sanders’ political rise did not happen in a vacuum, and it's unlikely he would have achieved much success had the social and economic conditions not been ripe. Though the 75-year old senator played an essential role in demystifying socialism to the public and instilling a radical spirit in the progressive movement, the current resurgence of class politics on the left has been in the works for many years, going back to the 2007-08 financial crisis.

It hasn’t been white-haired socialists who have provided the foundation for this resurgence, but young people who grew up in the era of neoliberalism. This was evident last week, when progressive millennials flocked to Chicago for the biannual Democratic Socialists of America (DSA) convention, where delegates came together to vote on various resolutions for the party. In the past year, the DSA has tripled its membership, and what is particularly telling about this growth is that the average age of DSA members has dropped by half virtually overnight, from 64 in 2015 to just 30 today.

This trend has led to a cottage industry of think pieces speculating about why millennials have embraced old school leftists like Sanders and British Labour Party leader Jeremy Corbyn, but it is hardly a great mystery. Millennials came of age during the worst capitalist crisis in 80 years and live in a time when income and wealth inequality have reached historic levels — as evidenced by the fact that the eight richest men in the world (seven of whom are white American men) own as much wealth as the bottom 3.6 billion people.

Millennials inhabit a planet that faces ecological collapse, and most grasp the threat of climate change on a visceral level. Young people are also crippled by record levels of debt and despite being better educated than their parents earn 20 percent less than baby boomers did at this point in their lives. Finally, millennials have grown up in a time when moneyed interests have completely infiltrated the political process, creating an oligarchic form of government that serves the economic elite rather than the majority.

In other words, millennials are increasingly ambivalent about capitalism because it is a system that has failed their generation. Not surprisingly, this has led to a significant number of young intellectuals who have also rediscovered the works of Karl Marx, the great diagnostician of capitalism’s ills. Around the same time that the Occupy Wall Street protests erupted around the country in 2011, Bhaskar Sunkara founded Jacobin, the left-wing quarterly that has grown rapidly over the past five years, publishing the work of many millennial Marxists.

Of course, it is one thing to call yourself a socialist (or a “democratic socialist”) in America, and another thing entirely to identify as a Marxist. For the past century Karl Marx has been the ultimate intellectual bogeyman in the United States. For the majority of Americans who have no first-hand familiarity with the 19th-century thinker and his work, the term “Marxism” is synonymous with Stalinism and totalitarianism.

As with the millennial embrace of an elderly democratic socialist, this Marxist revival has predictably confounded many liberal and conservative critics, who assume that youngsters simply don’t know their 20th-century history. “That Marxism is not viewed with a similar horror as Nazism is one of the greatest failings of contemporary education,” tweeted Claire Lehmann, editor of the libertarian-leaning publication Quillette magazine, last month.

One of the greatest failings of contemporary education, one might counter, is that critics of Marxism know next to nothing about Marx or Marxism, other than the fact that some unsavory historical figures identified themselves with the term. This is obviously not a new phenomenon, and more than 50 years ago the American sociologist C. Wright Mills attempted to provide an objective account of Marx’s ideas in his 1962 book, “The Marxists,” meant to counteract the propaganda efforts of Cold Warriors. Mills’ book is just as useful today when it comes to explaining why Marx remains relevant in the 21st century. (Some might argue he is even more relevant today than in the mid-20th century, as capitalism has conquered the globe). In order to uncover what makes Marx’s work so valuable, Mills makes an important analytical distinction between the philosopher’s methodology/model and his theories:

A model is a more or less systematic inventory of the elements to which we must pay attention if we are to understand something. It is not true or false; it is useful and adequate to varying degrees. A theory, in contrast, is a statement which can be proved true or false, about the casual weight and the relations of the elements of a model. Only in terms of this distinction can we understand why Marx’s work is truly great.

Marx’s model, argues Mills, “is what is great; that is what is alive in marxism. [Marx] provides a classic machinery for thinking about man, society, and history. That is the reason there have been so many quite different revivals of marxism. Marx is often wrong, in part because he died in 1883, in part because he did not use his own machinery as carefully as we now can, and in part because some of the machinery itself needs to be refined and even redesigned. . . . Neither the truth nor the falsity of Marx’s theories confirm the adequacy of his model.”

Marx’s model looked at the structure of society as a whole, as well as that “structure in historical motion,” and the German philosopher and economist employed this model to examine and reveal the dynamics of capitalism. This largely explains why there has been a renewed interest in Marx’s work in recent years, especially among millennials who have lived their entire lives under a global capitalist order. Marx’s model of looking at the world, along with his exhaustive analysis of capitalism, helps us to understand our own contemporary reality and where we are headed.

While Marx’s model is essential to understanding modern society, another fundamental aspect of Marxism is, of course, the merging of theory and practice. As Marx famously declared, “Philosophers have hitherto only interpreted the world in various ways; the point is to change it.”

This remains the ultimate goal for millennial Marxists and socialists. Although capitalism has never been more globally dominant than it is today, this has also engendered social and economic conditions that are ripe for left-wing political movements. As the Marxist economist Richard Wolff recently said during an interview on Fox Business: