Drone warfare is broken, buggy and losing us the war on terror 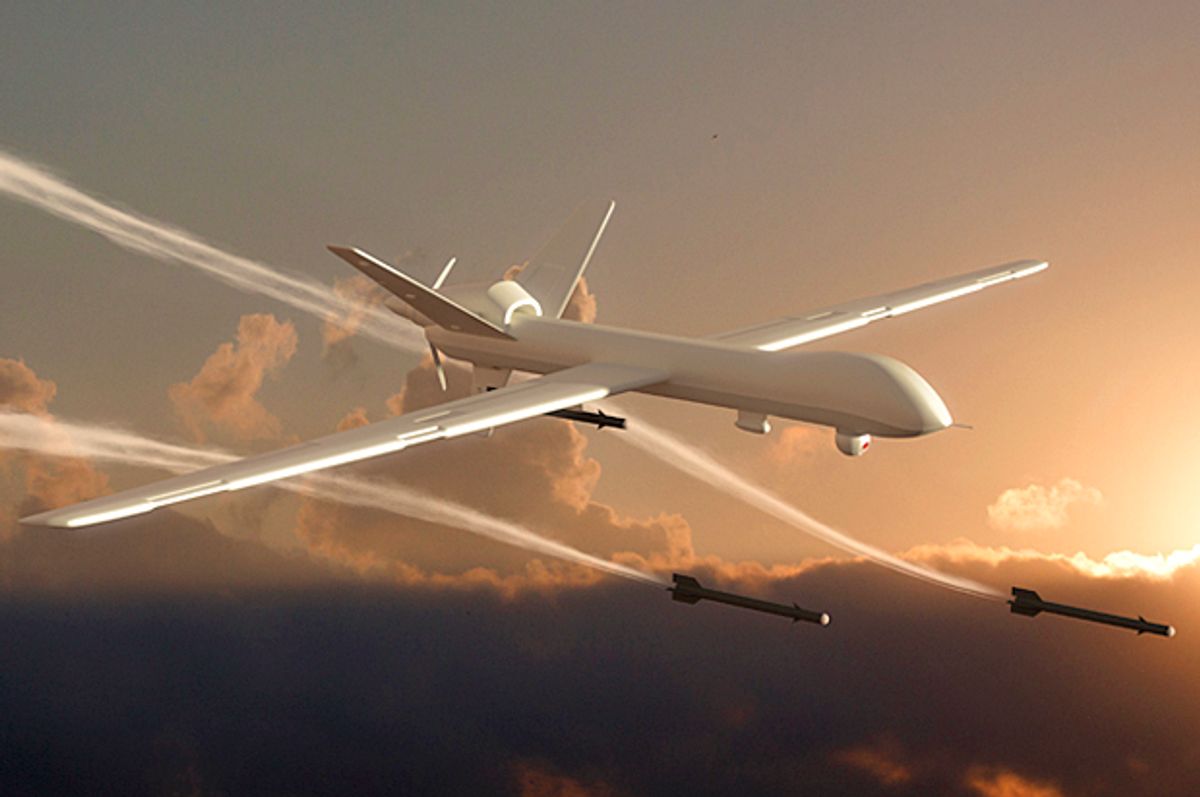 As the war on terror has evolved over the last 16 years, so have the methods and technologies in which the U.S. military has fought in these seemingly never-ending conflicts in the Middle East. Over time, the use of unmanned aerial vehicles (UAVs), or simply, drones, has rapidly increased. However, the way these machines are used, and the lives that they impact both directly and indirectly often gets lost behind the projected image of a safer, more precise form of remote warfare.

A new report, titled "Drone, Inc.: Marketing the Illusion of Precision Killing," examines the various hardware, software and people that make up and control these machines, and how their technological hindrances and limitations represent a troubling and problematic strategy that is seldom questioned.

"We're often told that drones are precision weapons, and that they can find people, and then target individuals without putting soldiers on the ground and with almost perfect accuracy," the report's author, award-winning investigative journalist and executive director of CorpWatch, Pratap Chatterjee, told Salon.

But the reality is far different. Chatterjee explained that drones are "really just a collection of sensors," made up of cameras, phones trackers, radar and more. "This 'weapons system' is really a sum of some pretty flawed parts," he explained. "How well does the camera work? How well does the phone tracker work? How well does the radar work?" It's imperative to understand the limitations of these functions, and what is, or isn't, in an operator's field of view while they look through the eyes of an unmanned machine thousands of feet in the sky. Chatterjee's in-depth report examines the little-known flaws of this technology.

"If any one of those doesn't work properly, we have a problem," Chatterjee said. If all of the necessary sensors don't function properly, decisions — almost always lethal — fall to human operators and commanders working without complete data. Naturally, confirmation bias kicks in.

"You may see something that you think is a problem," Chatterjee explained about such situations, "and then when you use other means to confirm it, you may fall into the trap of believing your first theory."

Chatterjee cites a perfect example of these flaws in the report — the killing of American aid worker Warren Weinstein and Italian aid worker Giovanni Lo Porto in Pakistan in 2015. The two were being held hostage, and accidentally killed in a "signature" drone strike that was meant to only terminate four suspected al-Qaeda militants. But despite more than 400 hours of surveillance, the hostages were not picked up by the drone's video camera nor the heat sensor. All six people inside the building died.

"It’s not altogether surprising that that video imagery was poor but what is more problematic is that the back-up heat sensor also failed," the report says. Both the Predator and Reaper models of drones use forward-looking infrared sensors (FLIR) and the hindrances include not even being able to "distinguish one person from the next," according to the report.

They "cannot see through trees and can be fairly easily thrown off by hot days, the profusion of heat sources in urban areas, and even by a well-placed blanket that dissipates body heat. Nor can they see into basements or underground bunkers." While filming from 10,000 feet in the sky it's "hard to distinguish one inanimate heat source from another," the report says.

All of the software used in drones "depends on algorithms," Chatterjee told Salon, "it depends on approximate accurate results."

Chatterjee said that what we're seeing "is a vast series of experiments on the people of Pakistan and Yemen, and really very little follow-up and evaluation to see if this technology works." While common criticisms of the use of drones of have centered mainly around legal issues as well as the ethical questions of remote, machine-aided targeting and the killing of civilians, Chatterjee takes the debate a step further, looking at "fundamental" aspects rarely studied.

"What is the technology? Was it evaluated? Does it work?" he asked. "How much evaluation have we done of the failures? Because clearly there have been failures; the Obama administration admitted it."

The unfortunate reality is that the drone program has killed scores of civilians, and there is very little, if any, transparency. By and large, the public is in the dark about its own country's clandestine military operations.

Much of the knowledge that's available about drone operations comes as a result of leaks, as seen in award-winning journalist Jeremy Scahill's 2015 "The Drone Papers." The exposé revealed the inner workings of the drone program through leaked documents as well as its "critical shortfalls" in both technology and intelligence-gathering methods while operating inside countries such as Afghanistan, Yemen and Somalia.

Former Distributed Common Ground System (DCGS) Technician Lisa Ling, who also appears in Sonia Kennebeck's film "National Bird" and has been very outspoken about the use of drones, told Salon that she has seen even less transparency under the Trump administration than under that of Obama, "which was already very little."

There are major cultural barriers that prohibit the military from understanding who exactly the enemy is, and when and how to use force. "We're asking young people, the ages about 18 to 24, to recognize something in cultures that anybody from the outside really can't understand fully from the ground, let alone a two-dimensional screen," she explained. "How can it not be problematic?"

She explained that soldiers' actions are essentially reinforced by their superiors, and they are told that "they're doing the right thing."

"I don't believe that we're on the right side of history with armed drones. I don't believe that we can continue to fight a war on terror with more terror," Ling said. "I mean, imagine, if there was a drone over any one of us right now, and we didn't know whether ordinance was going to fall out of the sky? And there's nobody immune, there's no profession, there's no age group, there's no gender, that really has not been blown up by drones."

"This is terror," she explained, "and we're seeing the blowback."

According to MuckRock, an organization that helps people share public records, a 2011 intelligence assessment by the FBI concluded "with high confidence" that "'a broadening US military presence overseas and outreach by Islamist ideologues' was behind an 11 percent increase in plotted attacks since 2006."

"I think it's incumbent upon all of us to speak out against terror, no matter who commits it," Ling said, also adding that the use of drones is "politically expedient." Meaning that "you can look like you're doing something, and not really be doing something," she explained.

One of the most alarming aspects of the so-called drone campaign is that there has never been a clear definition of who a terrorist is, where the boundaries of these wars lie and how we measure success in them. Can you even achieve success if you don't know what it is?

Answering or even contemplating these vital questions — and crafting necessary solutions to them — requires in-depth knowledge of complex conflicts, introspection and the input of voices outside the military-industrial complex. It requires strong, measured public discourse. None of that generates ratings. Without the full engagement of the public — and the media that is their main source of information — proper answers and top-to-bottom accountability may be long in coming.

"The only way that we in the Western world are attached to any of these wars are by basically keyboards, television screens," Ling said. "When any of the information about any of these wars comes up, we have the privilege and the luxury of being able to change the channel."

"And there are people in countries all over the globe right now that don't have that privilege and don't have that luxury, and their voices need to be heard," she explained. "I think that's crucially important."

If success with the use of drones, and perhaps the broader war on terror, is measured by how many suspected terrorists we blow up, the U.S. is undoubtedly winning — but that's doesn't mean an end to these conflicts is anywhere in view. It just means we've gotten good at killing people with UAVs and that more people — many of them innocent, some of them our own — will continue to die.