Michael Moore, Donald Trump and their joint campaign against reality 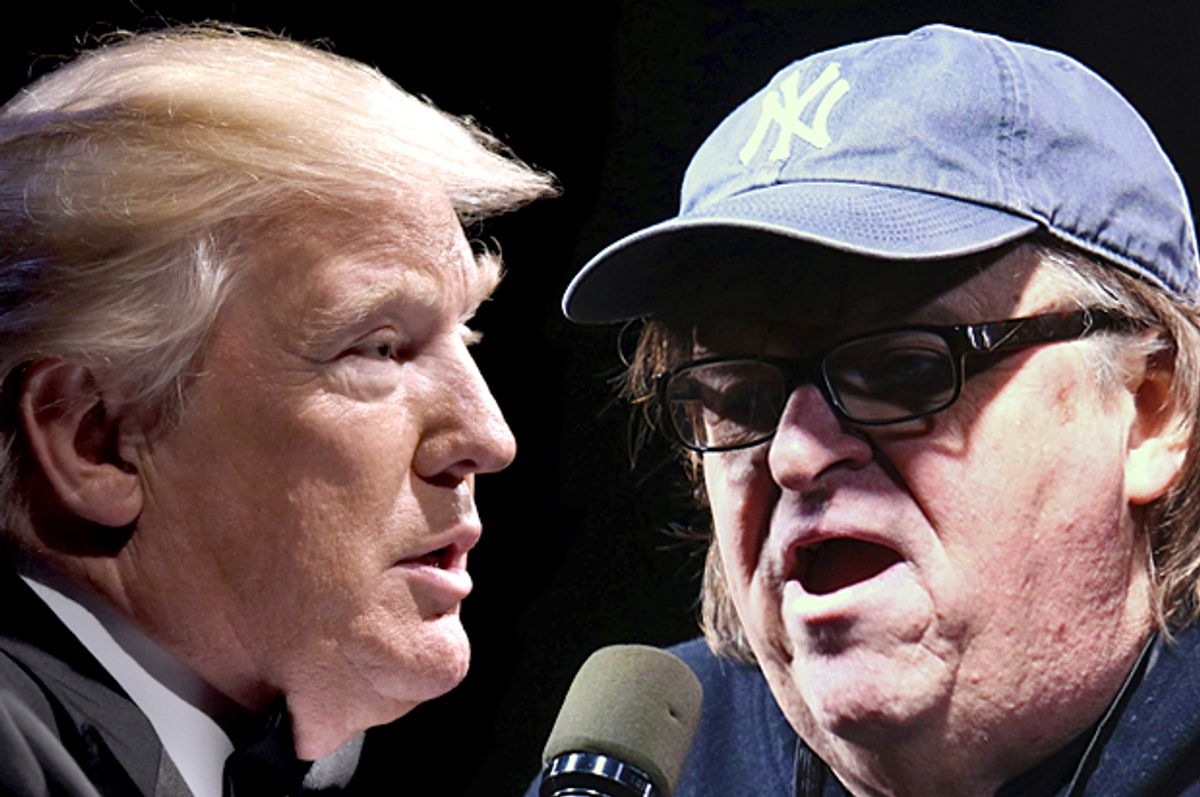 Some years ago when I was covering the Cannes Film Festival and doing my best to struggle through the French newspapers every day, I came upon a description of Michael Moore as “le prolo-bobo de Flint en Michigan.” I assume that phrase requires no translation, and indeed would resist any; there’s no way to capture that distinctive combination of mystification and mockery in English. I couldn’t help thinking about the nature of Moore’s strange dual identity as I worked my way through the celebrity-studded crowd and out onto 44th Street after the Thursday night opening of his cheerful and deeply confused Broadway show, “The Terms of My Surrender.”

Moore’s Michigan background and his roots in the white working class — a demographic that has become the focus of obsessive media attention since, oh, roughly early November of last year — have been huge factors in his rise to fame as a filmmaker, provocateur and massively polarizing media figure. He’s positioned himself as the guy who can remind an elite Manhattan audience, as he did on Thursday, that there’s a whole swatch of America they know little about “between the Hudson River and La Cienega Boulevard.” That’s a moldy gag, but Moore still spends enough time in the heartland to maintain considerable credibility: He was among the few prominent leftists to predict that That Guy would be elected president, telling an Ohio audience in late October that the forthcoming shocker would be “the biggest ‘fuck you’ ever recorded in human history.”

Moore never directly mentions that moment of dark prescience in “The Terms of My Surrender,” which despite its overly self-revealing title obeys the Broadway dictum to send the audience home feeling good. But Donald Trump casts a long shadow over this show, and Moore literally doesn’t know what to do with him. “How the fuck did this happen?” Moore asks the audience at the top of the show, and that gets a big laugh. But the question is never answered.

Moore is not alone in his Trumpified bewilderment, needless to say, but his relationship to the unlikely president he saw coming — as nemesis, and even as doppelgänger — has a special, haunted quality. One of them is the Michigan everyman who now finds himself a New York celebrity; the other is a New York celebrity who rose to power by posing as an everyman, and who won by carrying Michigan and the rest of the industrial Midwest by agonizingly small margins.

At this point Michael Moore has spent most of his adult life among what can only be called the coastal media elite — in the same galaxy as Trump, so to speak, but not quite the same planet — where he serves as a symbolic emissary from the semi-mythical Middle America it views with a mixture of anthropological fascination and sheer terror. There’s nothing hypocritical or dishonest in that; Moore has probably done a better job of staying true to his core principles while navigating wealth and fame than most of us would.

But the “prolo-bobo” Michigan-to-Manhattan act comes at a price, which is captured all too perfectly in the fact that Moore now finds himself the star of a meandering, half-baked Broadway production that repeatedly congratulates its audience for its enlightened views and general wokeness. This is not a show aimed at the people who delivered that big “fuck you,” needless to say; it’s for the people who would like to pretend it didn’t happen and keep on reassuring themselves that it will all soon be over.

As you’ve likely heard by now, “The Terms of My Surrender” really is a Broadway show, with a few whimsical gestures toward the relevant conventions. Michael Moore sings! (Not too badly, in a robust shower-room baritone.) Michael Moore dances! (Sort of; he admits he really can’t.) On opening night he took a brief turn around the stage with Gloria Steinem, who I’m guessing was quite the hoofer in her younger years. Thursday’s audience was also fully in the Broadway opening-night tradition: talk-show hosts, onetime supermodels and a wide variety of liberal-hued famous people, alongside a bunch of folks who were less recognizable but clearly extremely rich. Michael Strahan was sitting directly to my left; Tony Bennett was two rows in front of us, with Rosie O’Donnell a few seats to his right. Across the aisle was someone so generically famous I couldn’t place her, who turned out to be Christie Brinkley. When I made it out to the sidewalk after the show, I encountered Al Sharpton and Dan Rather, exchanging pleasantries before hopping into their limousines.

Those people and numerous others sat through an extended liberal pep rally during which Moore urged his audience, among other things, to begin to make the change America needs by promising to run for office. Um, OK, great — but for which office exactly? President of the coop board on East 86th? PTA head at the Chapin School? Moore tells an irresistible personal anecdote about running for school board as an 18-year-old stoner back in Flint — outraged grownups split the outraged-grownup vote, and he won! — that only drives home the fact that now is not then and here is not there. Not everybody who shells out to see this show will be Christie Brinkley, of course, but the overwhelming majority will be Northeast Corridor liberals who already live in islands of blue, and who may discover that the local Democratic Party takes a jaundiced view of spunky, idealistic newcomers.

I enjoyed “The Terms of My Surrender” a lot more than the memorable solo performance I caught last summer in Cleveland — Donald Trump’s 77-minute acceptance speech to the Republican National Convention, which was one of the most traumatic experiences of my life. But they had certain things in common. Both were devoted to assuring their audiences that their preconceptions about America and the world were entirely correct, and both resisted engagement with the more troubling or confounding aspects of reality. If the reality Trump must exclude is all of history, all of science, all knowledge and all rational thought, the reality Michael Moore must exclude is that Trump has undermined all those things and rendered them almost meaningless.

Harsh realm, I know. To be clear, I am suggesting a parallel, not an equivalence. I am not talking about who holds more humane and reasonable and generous views. I am without question a member of the class Moore is addressing here; there I was, two seats behind Rosie O’Donnell, which I guess makes me part of the liberal media elite. I probably agree with Moore on 85 percent of his political positions, or more; I’ve interviewed him several times, and have found him a much subtler and more attentive thinker than when he’s in showmanship mode. Whereas to the extent Trump holds actual views on anything — as opposed to unthinking, libidinal rage — they are uniformly appalling.

So it’s not that I think Moore is incorrect, exactly, when he insists that liberals and progressives hold more enlightened views and generally represent majority sentiment on a wide range of issues — although there is something desperate about preaching that gospel to a theater full of rich people in Times Square. But the subtext of “The Terms of My Surrender,” and sometimes just the text, is that nothing has gone seriously or irreparably wrong with American democracy or the American economy or American society as a whole, and that if those of us who are like-minded and sensible and well-intentioned get stuck in and do the work, everything will soon be OK.

In other words, we’re going to make America great again — but in a nice way. Maybe that’s the right message of bland uplift for a Broadway show, at least if you want a hit. But it’s not categorically different from Trump’s content-free campaign speeches about all the winning that would follow his election, in such profusion that his followers would get sick of it and yearn to become losers again. (Wish granted!) Furthermore, I’m not convinced Moore believes his own forecast of a return to sanity the day after tomorrow; at any rate, he has a devil of a time selling it.

“We,” Moore tells the audience, only have to flip 24 Republican seats in the House and three in the Senate to regain control of Congress: “We can do this, people!” First of all, Michael, who is this “we” you keep talking about? Secondly, as I will keep on saying until I’m blue in the face (ha!), that kind of untethered Jon Ossoff optimism is only likely to lead to morale-crushing defeat. It remains exceedingly unlikely that Democrats can win a House majority in 2018, thanks to the dark magic of gerrymandering and “demographic sorting,” and it is more likely that Democrats will lose Senate seats — possibly several — than gain any at all. (They must defend 10 seats in Republican-dominated states, whereas only two Republican incumbents are even remotely in jeopardy.)

Moore gets a big rise from the crowd by proclaiming that he can’t live in an America where Donald Trump is president but he isn’t leaving, so there’s only one solution: Trump (and Mike Pence) “must go”! A lot of us feel that way, but Moore says nothing about when or how that’s going to happen. Later, during his sit-down conversation with Steinem (he brings up a different left-liberal hero every night), Moore gloomily admitted that he sometimes asks people to consider how old they will be in January of 2025, the last possible month of the Trump administration. Steinem assured him, apropos of nothing, that the Equal Rights Amendment would make a comeback and the Electoral College would be abolished — a pair of constitutional amendments that no living American adult, at least in this plane of reality, will ever see.

Maybe that’s the problem with this show, and with a whole lot of what passes for the American left, which is trying to imagine itself into an alternate reality. Early in the evening, Moore points up at the Belasco Theatre’s empty presidential box and announces that Hillary Clinton should be sitting there, as the rightful winner of the national election. On opening night that moment fell notably flat, before a crowd rich with the Clintonite donor class. Maybe it was because every single person in that theater knew that Moore had been a Bernie Sanders supporter who accurately predicted that Clinton would lose, and this moment reminded them he’d been right. Or maybe it was because of the alternate-reality paradox: If we lived in a universe where Hillary Clinton were president, none of us would be attending a bizarre Broadway show that both is and is not about Michael Moore’s tormented relationship with Donald Trump. Would we be better or happier people? We’ll never know.