My meeting with Donald Trump: A damaged, pathetic personality — whose obvious impairment has only go 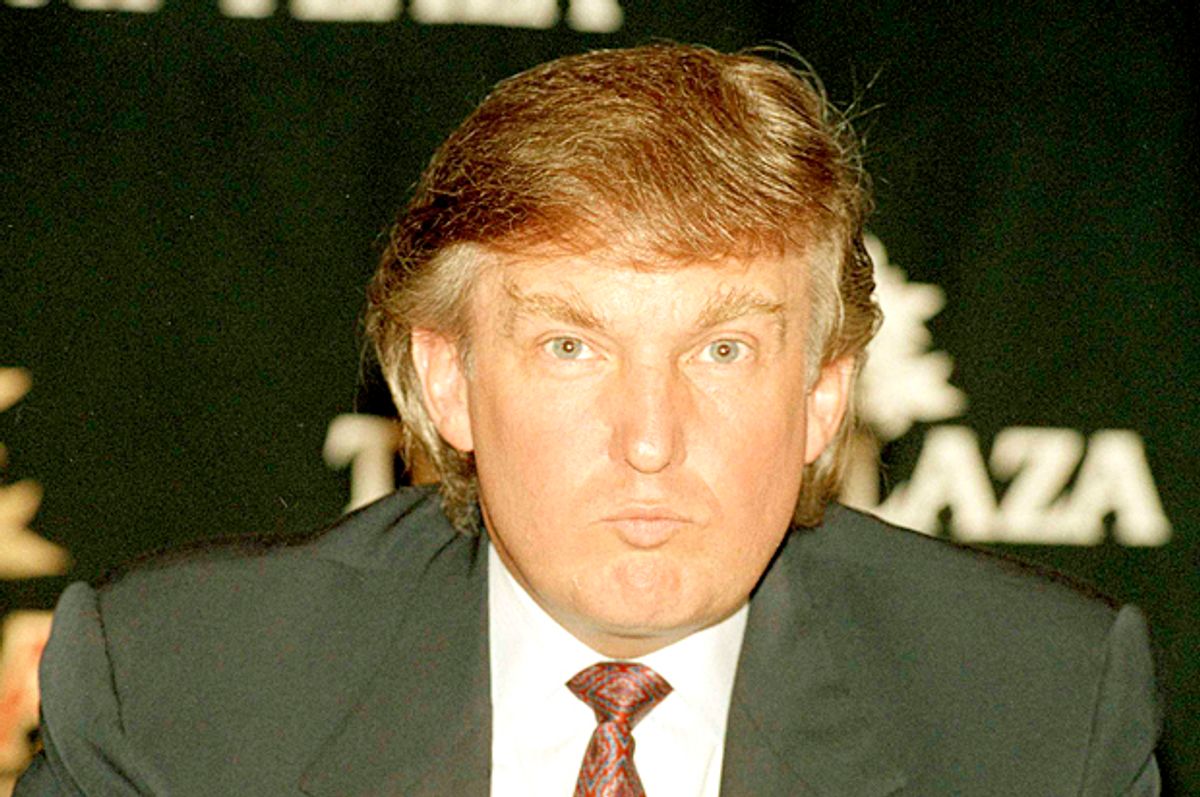 In 1994, I visited the home of Donald Trump. He was a Democrat then, of sorts, and I was the party’s nominee for governor of Connecticut. He’d taken an interest in our state owing to his keen desire to lodge a casino in Bridgeport, an idea I found economically and morally dubious. I had scant hope of enlisting him, but made the trip anyway, thinking that if I convinced him I might win, he’d be less apt to bankroll my opponent.

I arrived at Trump Tower in early evening, accompanied by my finance chair and an old friend and colleague. Stepping off the elevator into his apartment, we were met by a display of sterile, vulgar ostentation: all gold, silver, brass, marble; nothing soft, welcoming or warm. Trump soon appeared and we began to converse, but not really. In campaigns, we candidates do most of the talking; because we like to, and because people ask us lots of questions. Not this time. Not by a long shot.

Trump talked very rapidly and virtually nonstop for nearly an hour; not of my campaign or even of politics, but only of himself, and almost always in the third person. He’d given himself a nickname: "the Trumpster," as in “everybody wants to know what the Trumpster’s gonna do,” a claim he made more than once.

He mostly told stories. Some were about his business deals; others about trips he’d taken or things he owned. All were unrelated to the alleged point of our meeting, and to one another. That he seldom even attempted segues made each tale seem more disconnected from reality than the last. It was funny at first, then pathetic, and finally deeply unsettling.

On the drive home, we all burst out laughing, then grew quiet. What the hell just happened? My first theory, that Trump was high on cocaine, didn’t feel quite right, but he was clearly emotionally impaired: in constant need of approbation; lacking impulse control, self-awareness or awareness of others. We’d heard tales of his monumental vanity, but were still shocked by the sad spectacle of him.

That visit colored all my later impressions of Trump. Over time, his mental health seemed to decline. He threw more and bigger public tantrums; lied more often and less artfully. The media, also in decline and knowing a ratings magnet when it saw one, turned a blind eye. Sensing impunity, Trump revived the racist ‘birther’ lie. In 2011, he told the "Today" show’s Meredith Vieira he had unearthed some dark secrets:

Vieira: You have people now down there searching, I mean in Hawaii?

Trump: Absolutely. And they cannot believe what they’re finding.

As Trump recycled old lies, Vieira had a queasy look but no apparent knowledge of the facts. Of course, there weren’t any. Trump had no proof of Obama being born in Kenya. (Since there is none.) It’s highly doubtful he had any researchers in Hawaii. (It was only after Vieira asked him that he claimed he did.) Later, when Trump's story crumbled, he followed a rule taught by his mentor, Roy Cohn, infamous architect of McCarthyism: Admit nothing. To Trump, a lie is worth a thousand pictures.

By 2016, the private Trump was on permanent public display, raging over mere slights, seeing plots in every ill turn of events and, as always, stunningly self-absorbed. He was called a racist, a sexist and a bully. But his mental health issues were euphemized as problems of "temperament." He lied ceaselessly, reflexively and clumsily, but his lies were called merely "unproven" or, later, "false." The New York Times called the birther story a lie only after Trump grudgingly retracted it. Not till he was safe in office claiming that millions of phantom immigrants cast votes for Clinton did the paper of record use the word "lie" in reference to a tale Trump was still telling.

In 2016, the precariousness of Trump’s mental health was clear to all with eyes to see, but like extras in a remake of "The Emperor’s New Clothes," reporters averted their glances. The day after the election, they were all in a state of shock, like staff at an asylum who woke one morning to find that the patient who thought he was Napoleon had just been named emperor of France. Once he took office, many publications began keeping running tallies of his lies. But all take a more cautious approach to questions of their origins in his deeply troubled psyche. To date, no major network, newspaper or magazine has run an in-depth analysis of Trump’s mental health.

The pathologies of American journalism are by now clichés: aversion to policy analysis; addiction to horse-race politics; smashing of walls that once separated news, opinion and advertising; an ideology that mistakes evenhandedness for objectivity. Yet we hear scant talk of reform. The press excels at public rituals of soul-searching but has little taste for the real thing.  That said, its reluctance to discuss mental health reflects its virtues as well as its vices. Of major outlets, Fox News does by far the most psychological profiling. (It turns out all liberals are crazy.)

Like the language of politics, the language of psychology is imprecise; the term "sociopath" is as hard to nail down as "liberal" or "conservative." What separates a serial liar from a pathological liar? Mere suspicion from paranoia? Righteous anger from uncontrolled rage? How do we ever tell mental illness from ill character? Our view of any antisocial behavior hinges on whether we view it through a moral, legal or therapeutic lens; to take a human life other than in self-defense is insane, and also criminal and, to many, sinful. Do we treat, punish or forgive? It’s so hard to say.

The diagnosis we associate with Trump is "narcissistic personality disorder" (a term that only lately replaced "narcissistic character disorder"). You’ll find it in the Diagnostic and Statistical Manual of the American Psychiatric Association, fifth edition. Back in February, a principal author of the prior edition, Dr. Allen Frances, wrote a letter to the Times rebuking mental health professionals for “diagnosing public figures from a distance” and “amateur diagnosticians” for “mislabeling” Trump with narcissistic personality disorder. Allen says he wrote the criteria defining the disorder and Trump doesn’t have it. His reasoning: Trump “does not suffer the disorder and impairment required to diagnose mental disorder.”

Frances does what he accuses others of doing. By saying flatly that Trump doesn’t suffer a disorder, he diagnoses a public figure we assume -- for multiple reasons -- he hasn’t treated. Nor can he or anyone else tell “from a distance” that Trump doesn’t suffer the requisite impairment and disorder. No president ever seemed so impaired or disordered, but we needn’t compare him only to other rotten presidents. Trump is the Chuck Yeager of lying, a shatterer of records thought untouchable. That he is frozen in pathological, crotch-grabbing adolescence is well documented; that his judgment is often deranged by rage is self-evident.

This week the world watched two men of obvious, serious emotional impairment in control of ungodly nuclear weapons trade puerile taunts while threatening to incinerate millions of innocent human beings. Donald Trump, having made war on Mitch McConnell, Arnold Schwarzenegger, Nordstrom, China, Mexico, Australia and the cast of "Hamilton," baiting a man who idolizes Dennis Rodman and just murdered his own brother. This is simply unacceptable. We know how Kim Jong-un got his job. It’s time we thought about how Trump got his. One answer is that he got it the way authoritarian leaders do in liberal democracies: by exploiting the weakness and naïve politesse of the old order. To contain him, let alone remove him, we must relearn the rules of debate.

We can start by distinguishing name calling (bad) from merely naming (which is not just good but vital). I too recoil from quack therapists diagnosing strangers on cable TV. But you don’t need to be a botanist to tell a rose from a dandelion. In 2016 Trump compared Ben Carson to a child molester and pronounced him “incurable,” but few raised the far more real question of Trump’s own mental health. Do we dare not state the obvious? You needn’t be an amateur diagnostician to see that Donald Trump is mentally ill.

Trump embodies that old therapists’ saw "perception is projection." You can use this handy tool to locate the truth, exactly opposite from whatever he just said. He has a weight management problem, so women are “fat pigs.” He can’t stop fibbing, so his primary opponent becomes “Lyin’ Ted Cruz.” His career is rife with fraud so the former secretary of state becomes “Crooked Hillary.” He is terrified of ridicule, so Barack Obama is a “laughingstock.” When he says America’s a wasteland but he’ll make it great again, we know his secret fear.

Late in the presidential campaign Hillary Clinton famously dubbed some large portion of Trump’s base a “basket of deplorables.” A constant theme and core belief of her campaign was that his campaign was fueled by racism and misogyny, evils against which Democrats stand united. The evils are genuine and enduring, but political corruption and the economic inequality it fosters did at least as much and probably more to fuel Trump’s rise.

It’s likely that Trump’s arrested development also got him white working-class votes, among males especially. The infantilization of the American male is a phenomenon we have been slow to recognize. It is a product of fast-narrowing economic horizons fueled by cultural forces; by beer ads and anti-intellectualism, by addiction and violent video games, and now by Trump, on whom Jon Stewart pinned the fitting moniker "man baby."

Countless surveys say our children are less racist and sexist than our parents. What many may not be is more adult. The issue isn’t the bros in the beer ads; we assume they have jobs. It’s the tinderbox we create by mixing ignorance and inequality with dashed hopes and an overwrought sense of victimization. They say presidents lead us down the paths we’re already on. It’s our job to make sure this one doesn’t.

One thing Trump has taught us is that the drafters of the 25th Amendment weren’t thinking about mental illness. It is unlikely anyone it puts in charge would have the courage to take action. In any case, progressives must put their primary emphasis on crafting a blueprint for political reform and economic justice. While they’re at it they could try making better cases on national security and climate change.

They must take another lesson from Trump: to say out loud things they never said before, not as Trump does, but with honesty, decency, reason and specificity. Trump got to be president in part because there were so many things Democrats and the media didn’t think or couldn’t bring themselves to say. Trump’s whole life is a fraud that Robert Mueller may soon expose as a criminal enterprise. His business career was a disaster till a book someone else wrote and a TV show someone else produced made him a celebrity. He then fell into the only line of work he ever prospered in: licensing that celebrity. He does it pretty well, but Zsa Zsa Gabor did it first and Kim Kardashian did it better and neither of them should be president.

In 2016 Trump’s real vulnerabilities were his mental health and personal finances. We can now add his proto-fascism and his possible or intended treason to the list. Trump was lucky in the draw. His defects were so monumental, so toxic, we had no protocol for talking about them. There are effective and responsible ways to talk about all such things, but first our media and political elites must find the courage to name them. They know as well as you or I who he is.