Looking back, after a suicide: Were there signs that she was in danger?

College track star Madison Holleran's suicide shocked her community. This is how her best friend's mom saw her 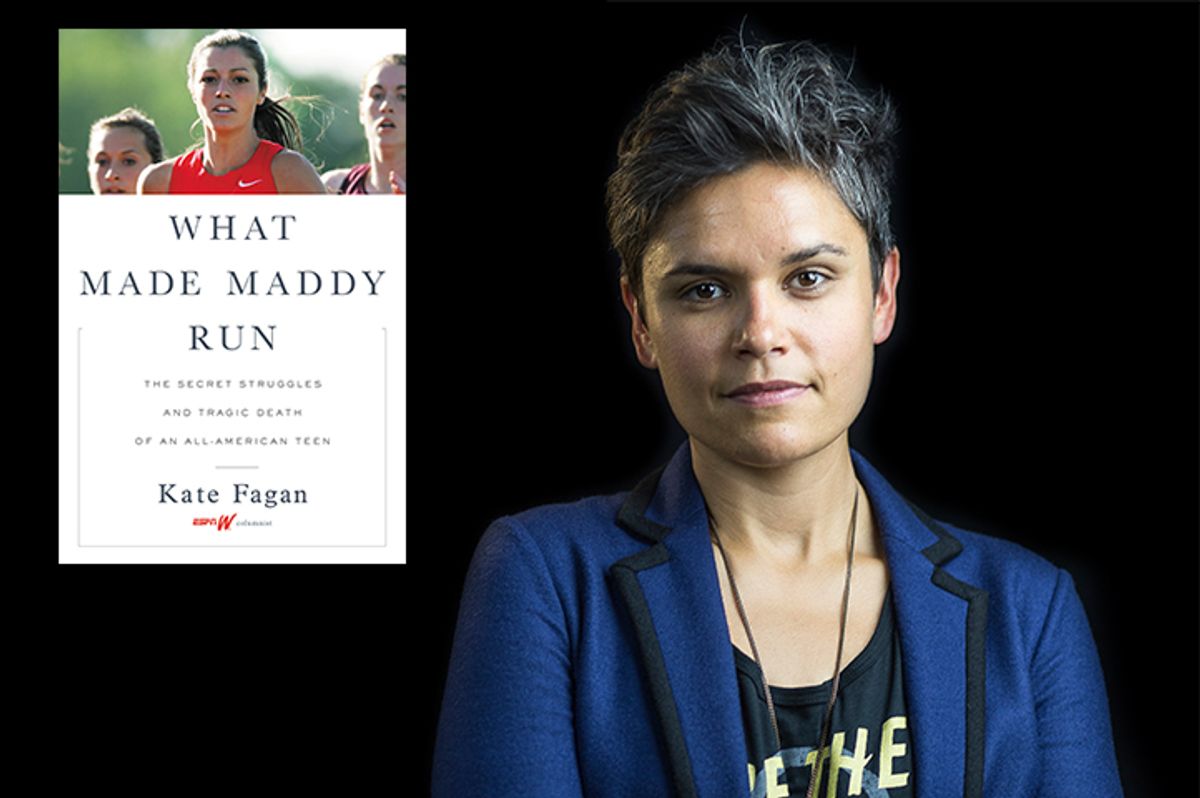 Excerpted from "What Made Maddie Run" by Kate Fagan. Excerpted with permission by Little, Brown and Company.

Madison was in her version of pajamas: a T-­shirt and sweatpants. Emma wore a variation of the same, but with the Boston College logo instead of Penn’s on the shirt. They had bagels and tea, and were making pancakes at Emma’s house. The falling snow outside gave them a reason to stay hunkered down and to be lazy. A group of them had slept over at the Sullivans’ house the previous night, including Brooke and Justine, but the other girls had to leave early, so it was Maddy and Emma, along with Emma’s mom, Lor­raine, who lingered in the kitchen, making breakfast and talking. It was Christmas break, so nobody had anyplace they had to be.

It was during these one-­on-­one interactions when Lor­raine best understood her daughter’s closest friend, though Lorraine was convinced that she might never truly connect with Maddy. A part of Maddy seemed closed off, unknow­able. Oddly this tendency was exacerbated in group settings, when Madison would often retreat into herself, choosing to sit at the table and study rather than join everyone else. None of Madison’s group noticed these subtle differences between their friend and everyone else, but how could they? They were immersed in these moments themselves. Their parents were of course less so. In addition, there was the simple mat­ter of sample size and experience — their ability to place Maddy in a larger context, just one among thousands of other inter­actions. Having interacted with dozens of their kids’ friends, the parents had a spectrum on which to judge the normalcy of each interaction, each person.

Emma saw Maddy from up close, as if looking in a mir­ror, while her parents and other adults were able to watch them both from afar, able to interpret the totality of their words and actions. “Madison is different than your other friends,” more than more parent told a daughter during high school.

Lorraine was a good five years older than Maddy’s par­ents, Jim and Stacy, but they had all grown up together on Long Island. The Holleran clan had been a big family around town. Although they had grown up in the shadows of New York City, the Long Island community operated almost like the small town Allendale was years later: people knew plenty about their neighbors. Depression and anxiety existed on Jim’s side of the family, but these weren’t the types of issues that families often spoke about with one another or anyone else. Mental health issues were handled privately; things weren’t spilled out into the open to be deconstructed and understood.

Madison, unfortunately, was never good at understanding why she was feeling a certain way. Often she communicated best through writing, not conversation. This made discussing her feelings with her parents and friends — beyond texting — very difficult.

Her demeanor in the kitchen at Emma’s house was Exhibit A: She could not, or chose not to, name exactly what was happening with her at Penn. On this snowy morning in early January, the two friends openly expressed their shared disap­pointment with college. But after a while, the conversation tilted again toward Madison.

“So what exactly are you most upset about?” Lorraine asked.

“I think it’s track,” Maddy said. “It’s making me unhappy — it’s just too much. It’s just not what I expected.”

That felt like a problem Maddy could solve: stop running track.

“But it’s more than that,” she continued. “I’m spending so much time studying, but I can’t seem to get ahead. And I’m tired all the time, but I can’t sleep. And . . . I just don’t know what exactly is wrong.”

She was skinny, drained. So beautiful you couldn’t stop staring, and yet in that moment all you could notice was the emptiness in her eyes. She was twitchy, nervous, but didn’t exactly know why. The conversation kept going in circles, with Emma and her mom trying to understand and help but Maddy failing to express anything tangible enough for them to untangle. Maddy would drop her head, clearly defeated, the gesture a kind of desperation conveying urgency, and this would launch them into another round of questions. This went on for hours.

At one point Lorraine considered asking her daughter’s friend if suicidal thoughts had crossed her mind, but she dis­missed the question as an extreme reaction. Maddy hadn’t taken the conversation to that level and didn’t seem to warrant that kind of concern, so Lorraine didn’t want to hit a panic button that didn’t exist. This question, to nearly everyone who consid­ers it, feels loaded. They feel they may be introducing an option rather than reflecting one that’s already been considered.