Put a "gate" on it: We've made every minor scandal equal to Nixon's Constitutional crisis 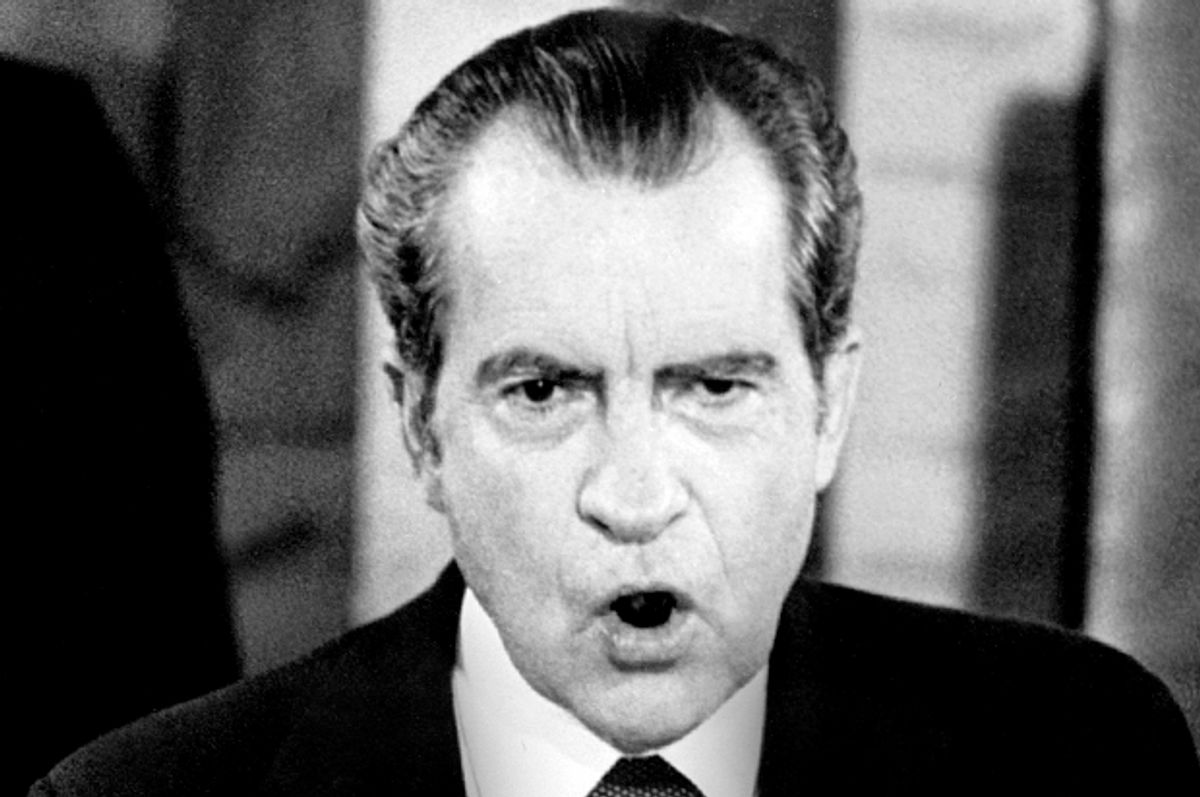 Much like politics in the United States, in the years since Richard M. Nixon became the first president to resign in disgrace, “-gate” has lost an awful lot of its gravitas. Let’s stop and recall that Milhous the Malevolent resigned in the face of sure impeachment by the Congress—because he had run a criminal conspiracy out of the White House, including trying to use institutions such as the FBI, CIA and IRS against fellow citizens.

When scholars describe Watergate, they use the phrase “Constitutional crisis,” not because some segments of America had a squabble over quartering soldiers in our homes during peacetime (which, let’s face it, depends entirely on how cute they are). It was because Nixon and his band of thugs created a situation where the judges, federal agencies and elected representatives in our system of constitutional government—that thing all politicians swear to uphold and protect—nearly became unable to uphold the laws of the nation and continue the operation of an orderly, responsible democracy.

The “-gate” suffix retained that sense of Constitutional import when it surfaced during Contragate, when the Reagan administration illegally sold arms to Iran which was under an arms embargo—in order to finance illegal support for anti-communist Contras in the El Salvador civil war, which also had been outlawed by Congress. Eleven people, including the Secretary of Defense, the president’s National Security Advisor, an Assistant Secretary of State, CIA officials and military officers were indicted. Most were pardoned by Pres. George H. Bush, who claimed that even though he was Reagan’s vice president he knew nothing about the whole affair.

Since then, however, “-gates” have become as cheap and plentiful as high-fructose corn syrup. Or maybe Trump administration spokespeople: every time you turn around, there’s a new one and it’s shallower and more vulgar than the last.

Wikipedia lists more than 180 “-gate” scandals in the fields of entertainment, sports, politics and even in fictional entertainment. When even a bit player such as New Jersey Governor Chris Christie has two gates to his name in a mere three years, you know these scandals have become nothing but cheap knock-offs, like Chinese DVDs of the latest Star Wars movie.

First, there was Bridgegate, where representatives of the New Jersey governor ordered lanes between the George Washington Bridge and the city of Fort Lee, New Jersey, closed because the Fort Lee mayor didn’t endorse the governor. At least a few henchpeople went to jail for that bit of petulance.

Christie’s next foul-up was even more minor: Beachgate, when the governor shut down the state beaches during the Fourth of July weekend because of a budget impasse with the state legislature. Nobody went to jail, but nobody went to the beach—except for Christie who, doing his best impression of the love child of Marie Antoinette and Jabba the Hutt, hopped off to the governor’s shore-side residence where he was photographed sunning himself on the sand, all while firmly denying any beach-going activity.

All we got out of that was a series of Internet memes of Christie planted in a beach chair.

The absolute worst gates are English, for some reason. Why the British press insists on adopting this slovenly American custom is beyond us. For a country with many more press restrictions than the U.S., you’d think that Parliament could’ve gotten around to banning the “-gate” suffix throughout the U.K., but for some reason they put up with it, much like British food.

British gates included Murdochgate, when Rupert Murdoch’s News of the World hacked into the phones of celebrities and crime victims. It eventually put the newspaper out of business, which you’d think would serve as a warning to all the others, but no. There were decidedly more dreary episodes, including Sachsgate, over obscene prank messages left on the answering machine of actor Andrew Sachs during the Russell Brand Show on the BBC, and Flakegate, when some TV host used her wedding to promote the Cadbury Snowflake chocolate bar.

The Brits have managed, however, to take the gate-mania to its ultimate end, with not one, not three, but two separate Gategates, one involving a soccer player who missed practice because he claimed his electric gate at home malfunctioned, and the other involving a Member of Parliament being directed to wheel his bike through a gate when leaving Downing Street.

Seriously, do we need to send Woodward and Bernstein over there to slap those reporters?

Gate inflation clearly started during the Clinton era, proving that our brothers and sisters in the political press can smell a pack of phonies from a mile away. Unfortunately, they then spent years baying like a pack of addled coon hounds over trivialities such as Hairgate, Travelgate, Nannygate and Whitewatergate.

In fact, there’s been such widespread abuse of “-gate” that we’re repeating ourselves. We’ve already had two Choppergates involving helicopters, multiple Memogates and at least three scandals involving state police that were christened Troopergate. We can call that trend clichégate.

For the most ridiculous gates, you’ve got to go to the entertainment media, which brought us Donutgate, based on some random incident of singer Ariana Grande licking unpurchased donuts and stating, “I hate America. That’s disgusting.”

The big entertainment scandal was, of course, Nipplegate, when Justin Timberlake accidentally (it was claimed) revealed Janet Jackson’s nipple for a split-second during the halftime show of the 2004 Super Bowl broadcast on CBS. This was the most un-gatelike gate in that it clearly had nothing whatsoever to do with a cover-up.

In the aftermath, so many outraged TV-viewing mammals got their own nipples in a twist that 540,000 complaints were filed with the Federal Communications Commission. At the time, FCC Chairman Michael Powell called it, “A new low from primetime TV,” clearly revealing that Chairman Powell never had been exposed to The Dukes of Hazard.

Eventually, the case wended its way—twice—to the Supreme Court before a lower appeals court voided the fine because it involved merely, “a fleeting indecency.” In the end, everyone learned a valuable lesson about tape-delays in live video, and they all agreed it could’ve been worse—it could’ve been Tito Jackson.

You can draw a somewhat southbound angular line from Nipplegate down to Pussygate (depending on the individual involved), where an old video surfaced where Trump lewdly explained to TV host Billy Bush that the then-Republican candidate’s celebrity entitled him to groping women because, “When you're a star, they let you do it. You can do anything... grab them by the pussy.” And while we’re exploring the nether region of Trump “-gates”, there’s also Pissgate, where an unsubstantiated dossier of intelligence from a former British spy claimed that the Russian government had obtained a tape of Trump in Moscow watching Russian hookers dowse a bed that the Obamas had slept in with “golden showers.”

These days Trump isn’t hearing the phrase, “Urine a lot of trouble” because of deviant water sports, but over the other potential Russian connections between himself, his real estate business, his family members and campaign advisers. At the very least, Russiagate restores some respectability to the devalued scandal suffix by involving the possibility that candidate Trump and his staff violated actual laws, and not just pastry health codes.

Add the possibility that President Trump may have obstructed justice—or might go on to impede it by firing special investigator Robert Mueller, his own attorney general and possibly more staffers in the Justice Department, and there’s only one conclusion we can draw: Donald Trump is Making Gates Great Again.