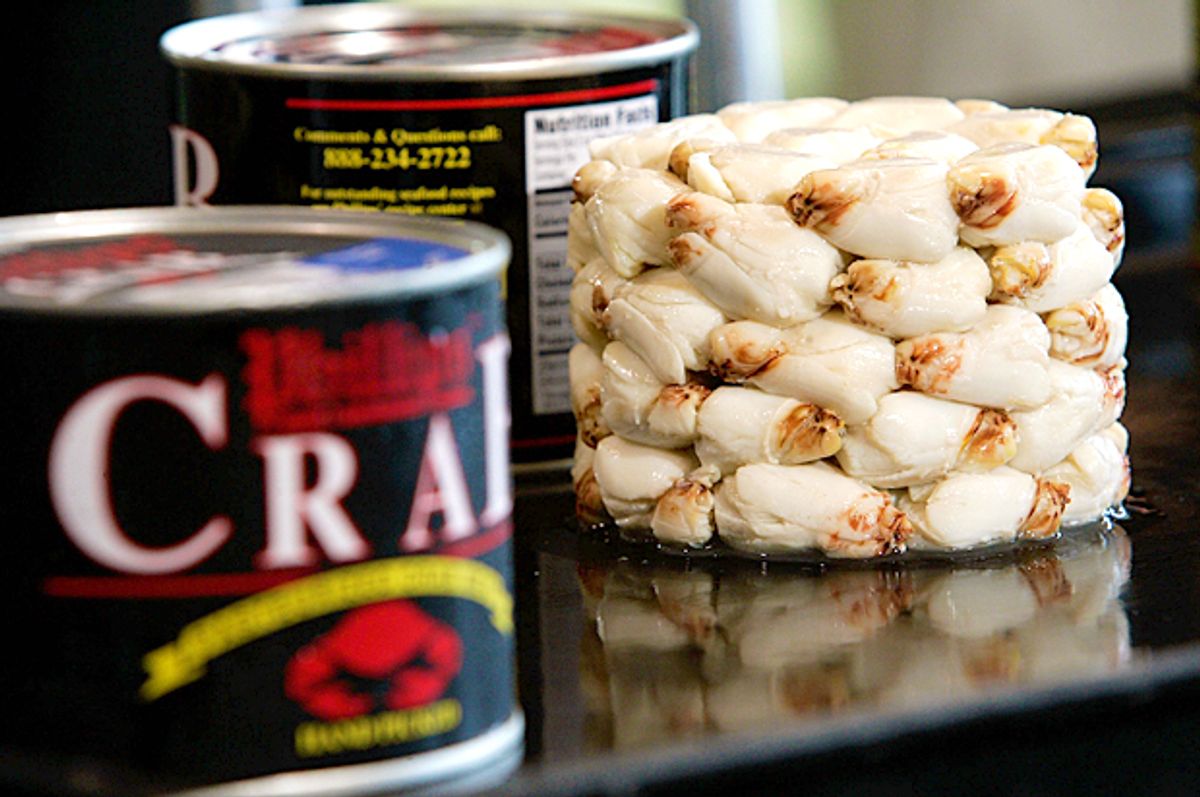 Phillips Seafood is a Baltimore-based company that trades on its historic connections to the Chesapeake Bay blue crab fishery. The signature dish at its restaurants is the famed Maryland-style crab cake, and its dining rooms feature models of antique fishing boats and romanticized images of the bay watermen culture that is fading fast. But organizers say it’s mostly fake — a cover story for a rapacious, globalized business that preys on poor Indonesian women to extract rich profits for its U.S. owners.

That’s the story being told by a multinational federation of labor organizations committed to helping those Indonesian workers, according to Hidayat Greenfield, the Asia-Pacific regional secretary of the International Union of Food, Agricultural, Hotel, Restaurant, Catering, Tobacco and Allied Workers’ Associations (IUF). A loose alliance of unions in 129 countries around the world, the IUF is spreading the word to Phillips’ U.S. customers about the company’s human rights abuses in Indonesia.

Last month, representatives of the IUF’s U.S. affiliate, United Food and Commercial Workers (UFCW) union, were in Ocean City, Md. handing out informational pamphlets at a Phillips restaurant where the company is currently enjoying its seasonal bonanza of business from beachgoers at the resort town.

The facts of the labor rights struggle in Indonesia are shocking, although not unknown in the region, according to Greenfield. Phillips operates a crabmeat processing plant in the city of Lampung, strategically located near the fisheries of the Java Sea and nearby waters. Organizers say the facility relies mostly on low-paid female workers organized by the Lampung Foodworkers Federation to shell crabs by hand and prepare the food for shipment to the United States.

Over the last four years, Greenfield says, the company has resisted labor law reforms being introduced by the government, and has recently stepped up efforts to further cut labor costs with so-called “mini-plants” designed to exploit rural workers even more thoroughly than urban workers.

“We say ‘mini-plants, mini-hell,’” says Greenfield. The mini-plants are typically set up in rural areas, and the work of crab picking farmed out to local women on a short-term, piece-work basis. Usually returned to Lampung “on the back of a motorbike,” the crabmeat receives final processing at the Lampung plant before being shipped to the United States, Greenfield explains.

“You can’t maintain modern quality and hygiene standards when you outsource like that,” he says. “The system is a threat to the health and well-being of the workers, and to Phillips customers back home [in the United States].”

And the customers are not just at the Ocean City restaurant. Phillips owns and operates five other restaurants, as well as a growing franchise that is spread to 10 airports or large casinos across the country. Furthermore, the company is marketing its own brand of canned and prepared seafood to grocery distributors nationally. The company is secretive, publishing no information about its revenues or profitability: Several requests to Phillips corporate headquarters from In These Times for additional information or comment were ignored.

It’s no surprise that Phillips doesn’t want to talk about its South Asia seafood operations — few international seafood corporations do, according to Tim Ryan, Asia regional program director at the Washington, D.C-based worker advocacy group Solidarity Center. The world has been scandalized by exposes of the Asian seafood industry’s tolerance of slavery, trafficking in migrants and young girls, abusive working conditions and sub-poverty wage practices, Ryan says. “There aren’t many people who want to be associated publicly with that.”

According to Ryan, some of the worst practices have been exposed in Thailand, where Phillips is also active. A recent report from Bloomberg Business News Service listed the United States, Ecuador, Mexico, Indonesia, India, the Philippines, Thailand, and Vietnam as locations of Phillips processing plants.

Labor problems at the Lampung Phillip’s plant really started to escalate about four years ago, Greenfield reports, when union members began agitating to be recognized as full-time workers, rather than as casual workers. Due to labor law reforms under way in Indonesia now, he explains, recognition would have allowed the women to qualify for participation in the country’s national health care system. According to Greenfield, Phillips wouldn’t agree, although some of the workers have been permanent employees for 10 years or more. Nor would Phillips agree to union recognition for Federasi Seikat Buruh Lampung (FSBL), the Foodworkers Federation with collective bargaining agreements at ten other seafood processors in the city, Greenfield says.

Although the labor conflict seems far away, it does have an impact locally in the home city of Phillips’ corporate headquarters. The company has been a mainstay of the Baltimore scene for decades with its prominent restaurant in the city’s Inner Harbor tourist district. In the business community, Phillips is a long-time supporting member of Restaurant Association of Maryland. It does not seem like a coincidence, then, that the Restaurant Association was prominent this year in the campaign to kill a $15 minimum wage law, a campaign that impacted its own food servers and all the other working poor in Baltimore — and beyond.