The day has finally arrived: America's pathological liar-in-chief has turned to nuclear saber-rattling 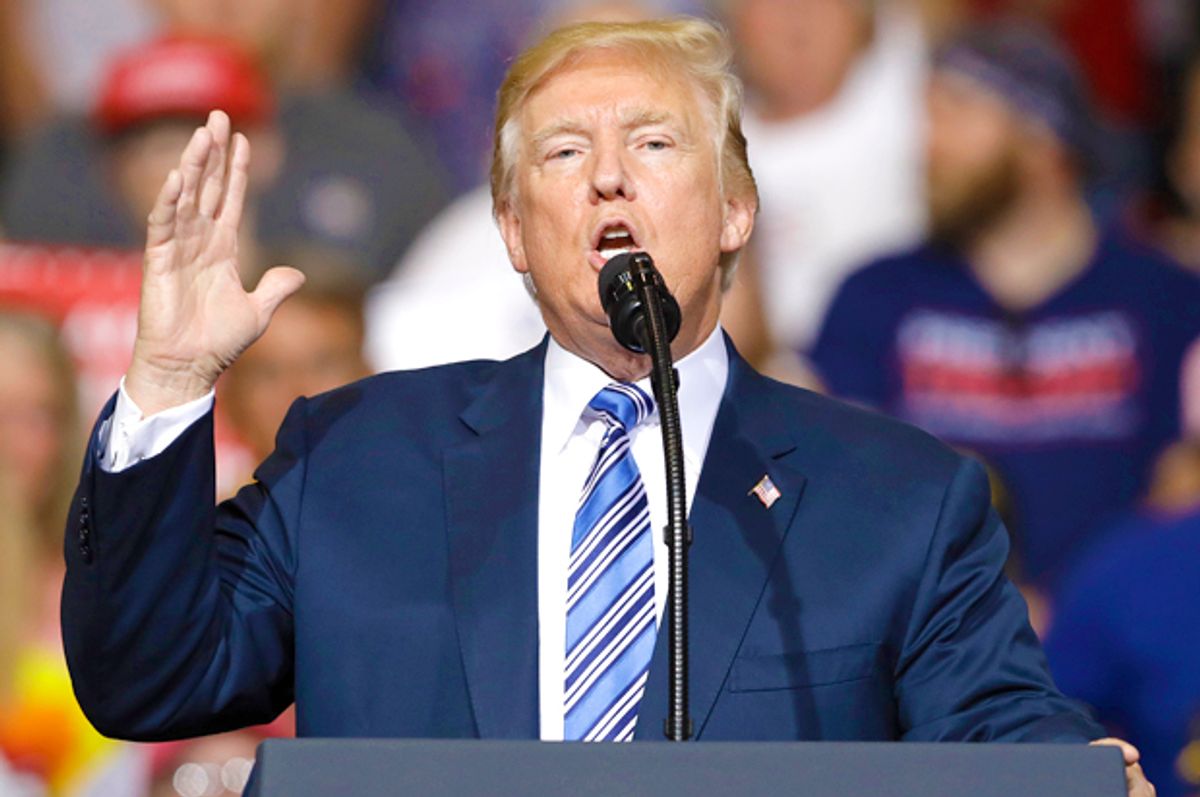 President Trump lies so much no one knows when he’s telling the truth.

But the twisted words of the president-who-cried-wolf took a dark and ominous turn Tuesday, when in a 30-second response to a reporter’s question, Trump threatened to unleash unprecedented military force against North Korea.

Trump’s remarks, aimed at a region that two days before marked the anniversary of the world’s first atomic bombing of civilians (Hiroshima), and on Wednesday, marks the second (Nagasaki, Japan), are as dangerous as they are surreal. They are dangerous because he is commander-in-chief, has the authority to order military strikes and is as unstable as the North Korean dictator—both are unrepentant bullies. No one knows where this escalation will end up.

There’s nothing about Trump that inspires trust or confidence, because the man himself is as much an egomaniac as he is a pathological liar. Politics is full of egomaniacs, but American politics hasn’t seen a liar like Trump in decades. Now, with nuclear saber-rattling, the deceptive side of Trump has become deadly serious.

Trump can’t stop lying, as the New York Times again pointed out Tuesday, before he threatened North Korea. The White House press office justifies those lies by bending what’s already twisted. Truth squads like PolitiFact have documented that 69 percent of Trump's assertions fall under the false umbrella. The Times even listed scores of his lies in his first six months in office, and indexed hundreds of people he’s insulted via Twitter since in office, and even more during the campaign.

The world is watching the latest he-man with access to far more than a gun. What Trump’s hall of mirrors and threats is doing to American politics, culture, institutions, professions, and individuals who rely on separating facts from fiction is one thing. But add in the military component and Trump is on the verge of what despots have done throughout history, as Yale historian Timothy Snyder described in his anti-Trump pamphlet, On Tyranny: 20 Lessons from the 20th Century. Trump’s mish-mash of lies, taunts, threats, propaganda, and attacks on the press and any adversary is paving the path toward a new American authoritarianism, Snyder said.

“The way it works is that you first just lie a lot,” Snyder said. “You fill up the public space with things that aren’t true, as Trump has obviously done. Next you say, ‘It’s not me who lies; it’s the crooked journalists. They’re the ones who spread the fake news.’ Then the third step, if this works, is that everybody shrugs their shoulders and says, ‘Well, we don't really know who to trust; therefore, we'll trust whoever we feel like trusting.’ In that situation, you can't control political action and authoritarianism wins.”

When Snyder spoke to AlterNet last winter, he suspected Trump might create a domestic crisis as a pretext to impose some semblance of martial law. He worried that whole slices of the public would be susceptible to his rants and raves, as large populations throughout history have always had vulnerable and ill-informed masses.

“Frankly, we’re in uncharted waters here,” Snyder said. “A lot of people believed in Trump because of his charisma and the simplicity of his promises and because, in many cases, they were facing real problems. What they believed in, unfortunately, has zero substance. It’s very hard for people to recognize that. It's much easier for people to be fooled than it is for people to be unfooled."

But now the uncharted waters Snyder warned about include the authoritarian’s time-honored tool, military might. But this escalating argument with North Korea is not the same as sending American drones into Yemen or special forces into Afghanistan. North Korea is determined to keep its nuclear arsenal, just as Trump seems determined to use military firepower to take it away.

Before Trump’s latest threat, the Times’ Sheryl Gay Stolberg wrote a long piece on the impact of Trump’s lies, suggesting his behavior “reflects a broader decline in standards of truth for political discourse.” In it, historian Doris Kearns Goodwin pondered “whether Mr. Trump, in elevating the art of political fabrication, has forever changed what Americans are willing to tolerate from their leaders.”

“What’s different today and what’s scarier today is these lies are pointed out, and there’s evidence that they’re wrong,” Goodwin said. “And yet because of the attacks on the media, there are a percentage of people in the country who are willing to say, ‘Maybe he is telling the truth.’”

Only last week Trump lied that the head of the Boy Scouts had said his was the best speech ever delivered to its national jamboree. He lied that the president of Mexico had called to say that tough border enforcement was working. But now America's liar-in-chief is threatening to inundate North Korea with “fire and fury and, frankly, power, the likes of which this world has never seen before.”

A representative government like the United States requires the public to trust the words and actions of its leaders, and to hold those elected leaders accountable. What are we to make of this latest apocalpytic threat from Trump? No one knows. And that’s precisely the problem with having a pathological liar as president.