After Charlottesville, HBO doubles down on "Confederate" 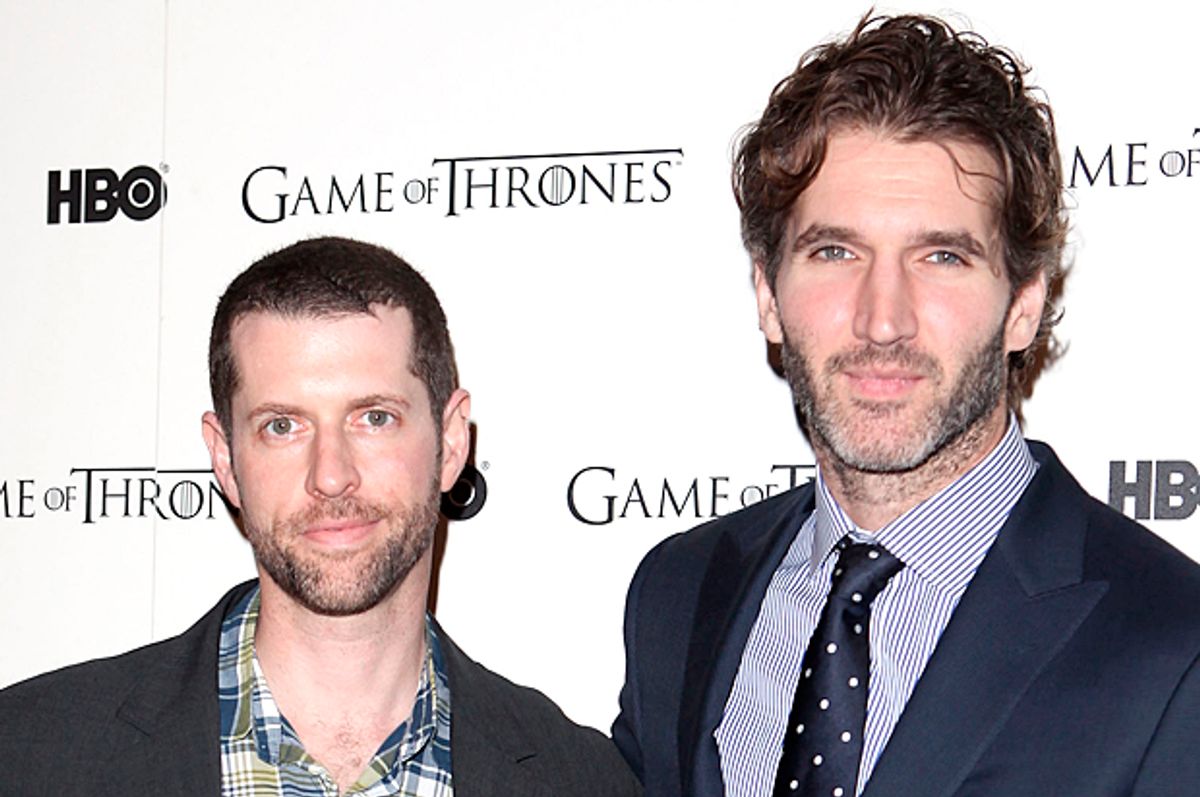 "Confederate," the forthcoming HBO show about an America where the rebelling Southern states managed to win the Civil War, was always a going to be a gamble.

With "Game of Thrones" creators D.B. Weiss and David Benioff — a team that has shown a distinct inability to handle issues of race and slavery — at the helm, it was looking to many like a pending problematic dumpster fire. Already, the #NoConfederate hashtag can be seen rising on Twitter trending lists whenever "Game of Thrones" airs.

With this weekend's deadly, vicious white-supremacist rallies in Charlottesville, Virginia, the questions, reservations and criticisms attached to the project seemed amplified. After all, many of the angry fascist, racist protestors there not only carried Confederate battle flags, supported the Southern position of black subservience and were there (ostensibly) to protect a statue of Confederate icon Gen. Robert E. Lee, but many who attended were attached to a movement petitioning for a new southern secession as well. As Monique Judge wrote at the Root, "There’s no need for a show about the confederacy when we watched it play out in real life on the internet and TV screens all day and night."

After spending the day crafting a statement in response to events that demanded one, representatives for HBO spoke to the New York Times last evening saying, "We support everybody’s right to express an opinion but the suggestion of irresponsibility on our part is simply undeserved." The statement continued "HBO has a long history of championing intelligent storytelling and we will approach this project with the same level of thoughtfulness that has always defined our programming. We recognize the sensitivity of this project and will treat it with the respect that it deserves. Our creative partners should be given time to develop the series rather than face prejudgment."

It is a statement that is, at least on one level, understandable in its defensiveness, and yet one that underlines a continued disconnect between the network and the concerns of its critics.

While, yes, it is unfair to judge a show by an initial press release in general, it is fair — and necessary — to point out the specific problems this specific show presents on its face. Not only is the subject matter and conceit of "Confederate" ill timed, potentially offensive it is unnecessary for anyone attuned to the ongoing racial issues that have plagued America since its foundations. Ask most black people if they need a premium-cable show depicting a fictional supremacist nation to help forward the debate on race relations. They'll tell you supremacy is a reality they live every single day. Allegories for facts staring you in the face are not always necessary, wanted or helpful.

As well, HBO — a wonderful company with a long history of progressive non-fiction films and series that confront racism in no uncertain terms — misses the point of the public's "prejudgment". While the show is untested, it's creators are not. D.B. Weiss and David Benioff have already tried their hand at discussing race and slavery through "Game of Thrones". Despite the undeniable quality of their show, they have been found severely wanting in that respect. Simply, they have proven themselves to be untrustworthy with this subject matter. The fact that the show will be written by a team of black creatives does not change where this series comes from or who is ultimately responsible for how it develops.

Finally, there's this: HBO's press department is among the best in the business. No questions there. And yet, it allowed this statement to come out with wording that accused the anti-racist movement of people protesting the show with "prejudgment". Technically, it's the correct use of the word. Yet, "prejudice" is a loaded term, one that shouldn't be leveed against a black-led movement against this particular show. It's easy to chalk its use up to a lack of care at a time when representatives are under an excess of pressure. Still, it shows HBO needs another voice in the room, one that understands exactly what's at stake here.

Of course, it's shortsighted to suggest that the events in Charlottesville have actually changed anything about racial history in the United States or "Confederate" for that matter. Slavery, our white-supremacist system, racist agitators and the legions of "Lost Cause" lovers existed before Saturday. They'll exist long after. From a historical perspective, idea of "Confederate" is no more or less questionable now than it was the moment it was announced, just as white supremacy is no more or less real than it was the moment before James Alex Fields murdered Heather Heyer.

Yet, the events of Charlottesville should at the very least spur a larger, more active response to white supremacy from any comfortable, affluent whites who've sat on the sidelines while Black Lives Matter did the work. At a moment when that white demographic — one that comprises the bulk of premium-cable subscribers — should be on their feet and making noise, HBO is asking everyone, black Americans included, to wait and see. For many, however, the time for patience has long since passed.