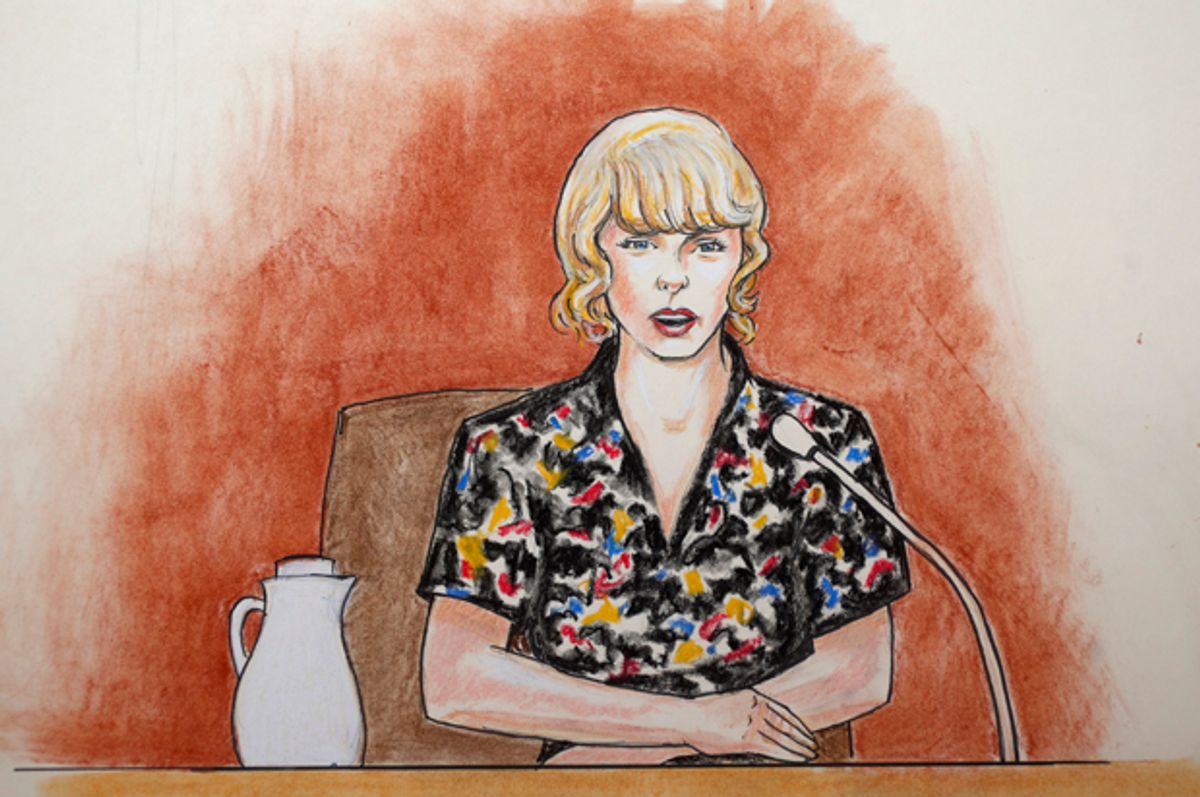 In this courtroom sketch, Taylor Swift speaks from the witness stand (AP/Jeff Kandyba)
--

Famously lanky pop songstress Taylor Swift is, it seems, as badass as she is tall. For years, Swift has advanced a kind of pop feminism, focused more on girl-power cheerleading than the grimier work of resisting patriarchy. That changed, through no fault of her own, when former DJ David Mueller sued her over an incident in which he allegedly groped her butt during a 2013 radio meet-and-greet.

Mueller says he didn't do it, and accuses Swift of getting him fired based on a false accusation. In reaction, Swift countersued him. On Monday, she won in court, after clearly winning in the court of public opinion.

What's really exciting is what this all could mean not just for Swift, but for women all over the country who face sexual harassment and even assault in their schools and workplaces. Can Swift use all her fame, power and privilege to help rewrite the script for how we understand these sexual harassment disputes? Can she push the public a little closer to realizing that sexual abuse is real and not something women just make up for mysterious reasons?

Alexandra Brodsky, the co-founder of the anti-rape group Know Your IX and an attorney working on education equity for the National Women's Law Center, certainly hopes so.

Many people still "expect the survivor to slink away quietly" after a sexual assault, Brodsky explained. By sticking to her guns and countersuing, she continued, Swift is sending a message to those who would "intimidate survivors: You better be ready for a fight."

Swift's court testimony on Thursday was thrilling, as she coolly shut down Mueller's lawyer, Gabe McFarland, during his repeated efforts to shift the blame to Swift, suggest that she was lying and deflect responsibility for the incident away from his client.

“I’m not going to allow you or your client [to] make me feel in any way that this is my fault,” Swift said, in a particularly fist-pumping moment. “Here we are years later, and I’m being blamed for the unfortunate events of his life that are the product of his decisions — not mine.”

Mueller's case isn't helped by the fact that the alleged ass-grabbing occurred during a photo shoot, which means there's a picture.

Brodsky explained that lawsuits are a common strategy to silence women or retaliate against them when they report sexual harassment or abuse.

“We, in recent years, have seen a rash of male students who were suspended or expelled for sexual assault suing the alleged survivors in retaliation, using these kind of defamation laws," she explained. "What’s scary is that the knowledge that’s a risk is part of a victim’s calculus in whether to come forward, whether to report someone to his or her school or whether to pursue litigation.”

Unfortunately, Brodsky added, survivors don’t often have the resources to fight off such lawsuits, "and so often end up settling in ways that are counter to their interests and counter to justice, because they don’t feel like they can fight a well-resourced opponent.”

Swift, of course, has plentiful resources, which she deliberately highlighted by suing Mueller for $1. But it's not a huge surprise that Mueller still took his chances. The myth that women lie about sexual abuse for the hell of it is still deeply ingrained in our society, and it's notoriously hard even for lawyers with hard evidence to persuade jurors who want to cling to the belief that most such allegations are false.

Just last week, in fact, a male journalist, Yashar Ali, was targeted by a similar lawsuit. Fox News host Eric Bolling is suing Ali for $50 million for a story Ali wrote in which multiple women alleged that Bolling sent them unsolicited photos of male genitalia. Ali spoke to 14 sources for his story, and presumably there is a digital record if such text messages did occur.

The choice to target Ali personally instead of HuffPost, which published his story and has much deeper pockets, only adds to the suspicion that Bolling's suits has less to do with uncovering the truth than with silencing women who have come forward with the counts his alleged sexual harassment.

In the past, women who made claims of harassment or abuse had real reason to fear public shame and approbation for coming forward. Watching that narrative turn around in pop culture, which can have a massive impact on culture at large, is a reason for hope.

It's not just that Swift is gaining the upper hand in public opinion. The story of her fellow pop singer Kesha shows that women these days can come out about alleged sexual abuse without being relegated to pariah status.

Unlike Swift, with her cool certainty about what happened to her in the face of some pretty aggressive denials, Kesha's journey has been a messier one. She has been entrenched in a public and horrific battle with her former producer, Dr. Luke, whom she accuses of sexual and emotional abuse. He, too, has countersued for defamation. Kesha has lost many of her court battles, due more to contractual issues than legal findings about her accusations, but it seems the public is on her side.

Kesha's new album, "Rainbow," was released last week to critical acclaim, and the media narrative quickly forming around her is inspirational, so much that it verges on cloying. But it's tough to quibble with that, since Kesha, like Swift, is reaching the broader public with a narrative feminists have been proclaiming forever: the story of the survivor. It's one where a woman does not need to be permanently broken or forever traumatized in order to demand justice. It's one where the man who rapes, hits or harasses is the one to blame, not the woman who was simply trying to live her life, do her job or make her art when she was targeted.

To be clear, both these women have money and fame and all the attendant privileges, which most women lack. But these kinds of pop culture moments can create dialogue among ordinary people about issues like sexual abuse, power and how we know who to believe when someone makes an explosive accusation of sexual misconduct. We can hope that makes it easier for people to take such accusations seriously when they happen closer to home.