Not just in Charlottesville: Across the country, bills immunize drivers who injure protesters

The tragedy of Charlottesville sheds light on this unconstitutional trend. 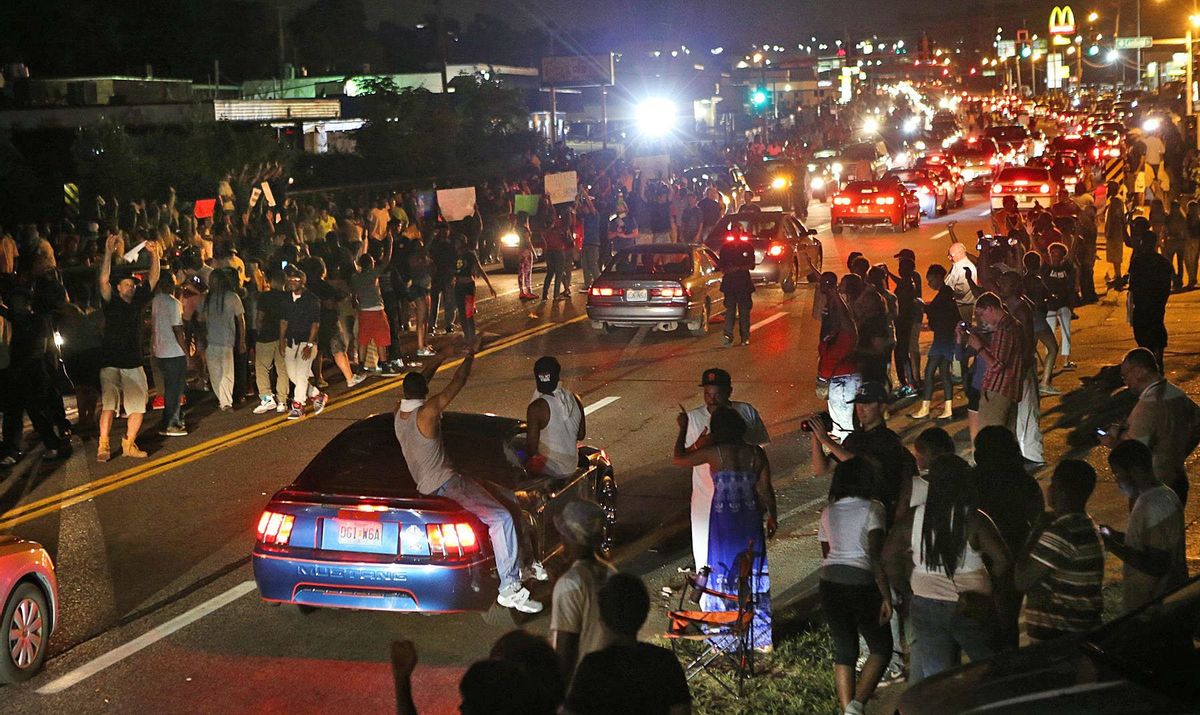 Many people drove down the street honking their horns, raising their arms, and holding signs on W. Florissant in Ferguson on Thursday evening, Aug. 14, 2014, as some demonstrators stood in the middle of the street. (AP Photo/St. Louis Post-Dispatch, J.B. Forbes))
--

With all eyes on the tragedies of Charlottesville, many say this is not the America they recognize. However, legalized violence is nothing new, chiefly in the form of police brutality and the immunity offered to those who retaliate against protesters. Though lawmakers are objecting to the car-plowing incident in Virginia that killed activist Heather Heyer, Republican representatives across the country have introduced a slew of bills granting immunity to drivers who injure protesters, exhibiting lawmakers’ disregard for freedom of speech and freedom to organize.

1. North Carolina votes to protect drivers who collide with protesters.

In April 2017, the North Carolina House of Representatives overwhelmingly approved legislation that would not hold drivers who collided with protesters liable as long as they “exercise due care.” After chaotic protests blocked interstate roadways in response to the shooting of Keith Lamont Scott by Charlotte police, the bill’s sponsor, Republican Representative Justin Burr, said, “This bill does not allow for the driver of a vehicle to target protesters intentionally. . . It does protect individuals who are rightfully trying to drive down the road.”

Though GOP lawmakers insist otherwise, Democratic Rep. Mickey Michaux said the law is racially motivated, given that people of color demonstrate most. “It would give some folks the idea” to intentionally run over minorities, he says. “Who demonstrates more than people of color?”

Like North Carolina lawmakers, Rep. Pat Fallon of Texas directly pinpointed protesters in his bill, stating that drivers who injure another person while “exercising due care” are not liable if the person injured is “participating in a protest or demonstration." This contrasts with previously peaceful relations between demonstrators and Dallas police, who worked together in blocking off streets and clearing paths, even during rush-hour protests. This symbiotic relationship came to a halt during a deadly ambush of Dallas police during anti-police brutality protests in 2016. (This legislation comes from the same state that proposed the all-but-dead “bathroom bills" that restricted transgender people’s access to public and school bathrooms.)

When a “visibly angry” motorcyclist began threatening and knocking down protesters to evade a demonstration blockade, lawmakers continued the trend of protecting those who “exercise due care,” as long as the injury was unintentional. But this proposal made no clear plan to define what was intentional versus accidental, implying that most collisions would be inadvertent.

“Driving is a privilege. Speech is a right,” said Paul Ortiz, a UF history professor who was participating in the march. “Your right as a driver is not protected by the U.S. Constitution. Your First Amendment right to speech is."

When several demonstrators ended up on the hood of an SUV in Nashville protests of the immigration ban, lawmakers proposed a similar bill. The legislation placed blame on the victims who were pushed nearly 100 feet to a gas station, rather than the driver.

The bill, proposed in early January, was written in response to protests at Standing Rock reservation in Canon Ball, North Dakota. "If you stay off the roadway, this would never be an issue," said the bill’s sponsor, Rep. Keith Kempenich. "Those motorists are going about the lawful, legal exercise of their right to drive down the road. . . . Those people didn't ask to be in this." According to Kempenich, the protesters “made a conscious decision to put themselves in harm's way." Even before the bill was proposed, Dakota Access Pipeline protesters were facing excessive force from police in the form of tear gas and rubber bullets.