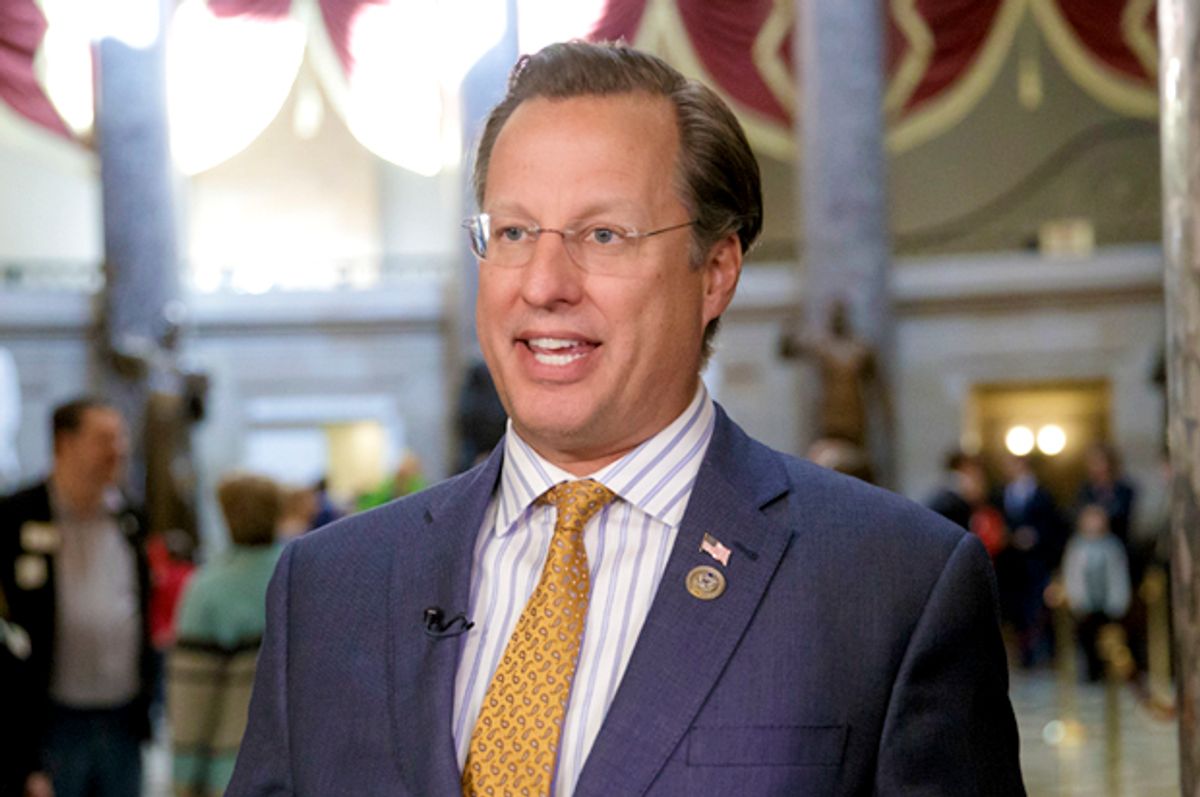 Donald Trump's statements drawing a false equivalence between hate groups and anti-racist protesters by blaming "many sides" for the violence in Charlottesville, Virginia -- comments on which the president doubled down in his Tuesday press conference in New York -- have made headlines and drawn intense social-media anger.

But Trump is not the only Republican politician ready to make such a comparison. Rep. Dave Brat, R-Va., a House Freedom Caucus member who represents a suburban district not far from Charlottesville, went on two cable news channels on Saturday and tried to compare feminists, liberals and even his own constituents to the white supremacists that descended on his state over the weekend.

In an interview with Fox News on Saturday, Brat pivoted from talking about the evils of white supremacy to complaining, "The hard left came out -- and the Women's March. And, I was getting caustic comments. I got booed at my town hall by 700 people."

"I got a taste at my town hall," Brat said when asked about the violence in Charlottesville during a Saturday interview on CNN, posted on YouTube by EMILY's List. "I got yelled at by 700 people swearing at me -- and no call-out from the media ... to my senators, who are Democrats in my state, to say, 'Hey, do you condone the hatred?'"

"I think it’s unfortunate that at a time of great national mourning and concern, rather than being a voice of consolation and strength and sadness, that what we heard were statements that did not reflect any of those emotions," said Abigail Spanberger, a former CIA official who is one of six Democrats hoping to challenge Brat for his seat in 2018, in an interview with Salon.

In response to a request for comment, Brat's office denied that the congressman had drawn "a moral comparison between hate groups and people at his town hall meetings" but was instead "commenting on the decline in civil discourse," which "is contributing to uncivil behavior and hurting our country." The statement concluded:

Democrats are never required to make statements about violent actions by groups on the Left like ANTIFA. Yet Republicans must answer for every hit piece press release sent out by EMILY’s List or other Democrat-linked organization looking to get an assist from their friends in the media and score political points from a tragic situation.

EMILY's List executive director Emily Cain responded by email: "Instead of using his platform to call for healing after a deeply horrifying weekend of violence, Dave Brat somehow thought it would be appropriate to whine about his own unpopularity."

Brat's complaints about "the hard left" stem from incidents earlier this year, when he faced down large groups of district residents whose main concern at the time was that he would vote to repeal the Affordable Care Act. (He did  indeed vote for a repeal bill that passed the House, before similar legislation failed in the Senate.) Brat garnered headlines at the time after a group of activists secretly filmed him at a fundraiser complaining about constituents' calls and questions, saying, "The women are in my grill no matter where I go."

“It wasn’t angry haters going in spoiling for a fight," said Alsuin Preis, a resident of Richmond, Virginia, and a constituent of Brat's. "We genuinely wanted our questions answered. We wanted him to be able to tell us why it was OK to take away people’s access to medical care.”

“As one of the people who did go to his town hall," said Kirsten O'Nell, another Richmond resident, "I’m really sick of hearing him talk about it. He complains about people being mean to him by yelling at him when they don’t agree with him." In the case of Charlottesville, she went on, "Those were actual Nazis who were out there, who had been planning this, and who had been wanting violence.”

Preis and O'Nell weren't just angry that Brat drew a false equivalence between white supremacist violence and his own constituents getting angry with him over legitimate areas of disagreement. They also said Brat tries to avoid interactions with the public, and is snide and condescending when people do manage to get hold of him.

“He repeatedly doesn’t take any kind of ownership or responsibility for things and will take every opportunity to blame it on someone else,” O'Nell said. "He and Trump are very much cut from the same cloth."

Brat has more in common with Trump than personality. By many accounts, both in mainstream and right-wing media, Brat's successful 2014 campaign for Congress was an important precursor for Trump's run in 2016.

In April, "This American Life" took an in-depth look at how Brat managed to unseat then-House Majority Leader Eric Cantor in the Republican primary that year. Brat had been a dark horse challenger; he was an economics professor at a local college,with little funding and no name recognition. Then Breitbart editor Steve Bannon (now Trump's White House strategist) and talk-show host Laura Ingraham decided Brat was their best bet to oust Cantor, whom they loathed for supporting  immigration reform. During the campaign, Brat repeatedly attacked Cantor for supporting a path to citizenship for undocumented immigrants who came here as children.

During that campaign Brat also enlisted the help of Stephen Miller, the now-infamous White House aide who is believed to have written some of Trump's most incendiary speeches. The New York Times reported that it was the Brat campaign's surprising success that brought Miller, Bannon and the staff of Breitbart together to back Trump, who they felt could turn the Republican Party toward a more overtly white nationalist ideology.

Since he's been in office, Brat has drawn fire for his 2015 comments on “The John Fredericks Show,” in which he compared undocumented immigrants who want to serve in the military to "barbarians," saying they contribute to "the decline of Western civilization at the highest level."

"I mean, ISIS is willing to serve in our military as well," the gentleman from Virginia added.

Preis and O'Nell also expressed concerns about Brat's attitudes toward the rise of white supremacist activity in Virginia, which he expressed well before this weekend's violence. Preis shared a letter that was sent to Brat last week asking him to release "a statement denouncing the actions of white nationalist Richard Spencer and his followers in Charlottesville this weekend" and suggesting that Spencer should be arrested and "charged with attempting to incite a riot."

In his response, posted on a local activist group's Facebook page, Brat wrote:

The First Amendment protects the opinions and speech of every American, including those that we may disagree with. As a devout Christian, I believe we must love one another and treat others with respect. In addition to that moral directive, Members of Congress and other officials [sic] the federal government have a legal obligation to treat every person equally under the law and discriminate against no one.

That may cast a darker shadow over Brat's apparent willingness to equate white supremacists spreading mayhem in the streets with citizens who oppose his views protesting or speaking out at town halls.

Unlike Trump on Saturday (and again on Monday), Brat made a point of condemning hate groups, often by name, in his public comments. But it's difficult to take those condemnations seriously if a member of Congress can't see the difference between white supremacists -- carrying bats, pipes, shields and even guns -- and people who yell at him in an auditorium. What we saw in Charlottesville last weekend was not rude or uncivil behavior; it was hateful and dangerous violence.