Spare us your sober monologue about Trump and Charlottesville, Jimmy Fallon

The "Tonight Show" host helped normalize a white supremacist. It's a little late for condemnation now 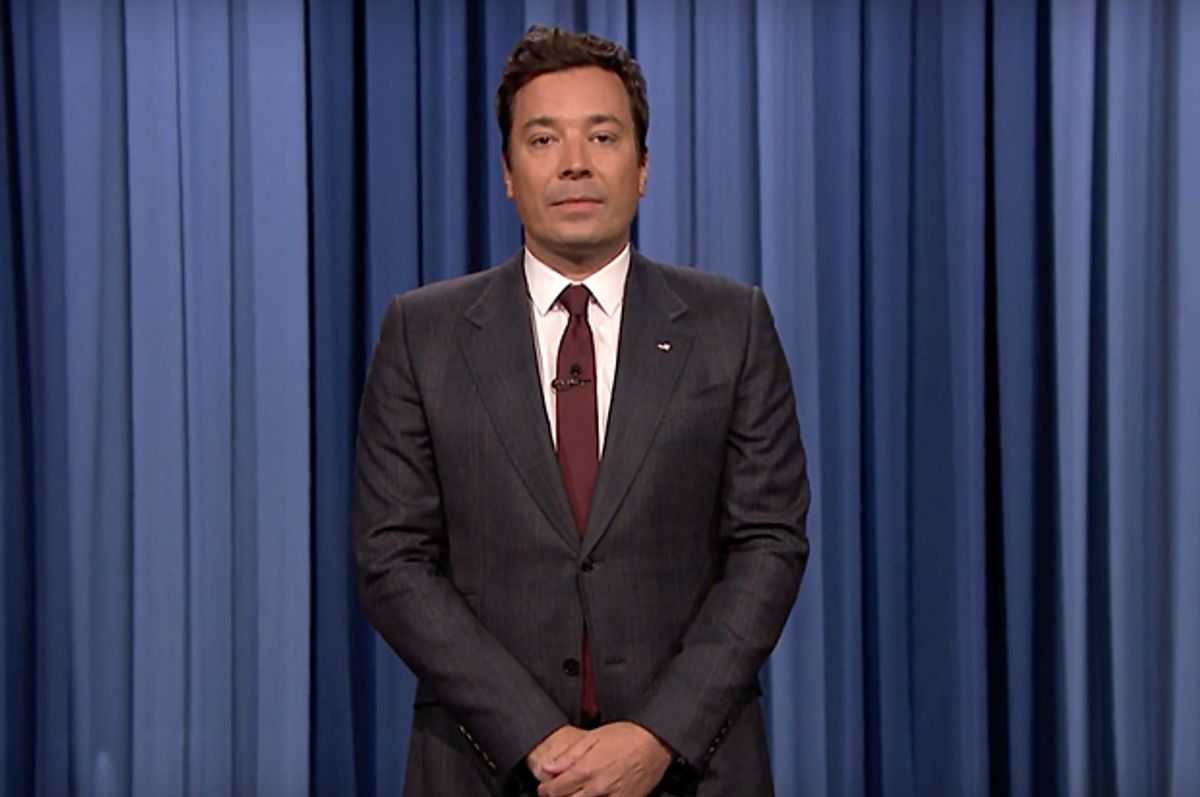 Google “Jimmy Fallon + Trump” today, and you're bound to find fawning reviews of "The Tonight Show" host’s atypically sober remarks on Charlottesville — a speech in which he criticized the president for his reluctance to denounce white nationalists.

“Even though 'The Tonight Show' isn’t a political show, it’s my responsibility to stand up against intolerance and extremism as a human being,” Fallon said. “What happened over the weekend in Charlottesville, Virginia, was just disgusting. . . . The fact that it took the president two days to come out and clearly denounce racists and white supremacists is shameful.”

That’s a fairly inarguable point, and I’ll at least give Fallon credit for taking a momentary break from joke-telling to make it. But the gushing over Fallon’s statement, however heartfelt it may have been, seems a bit much under the circumstances. Collective memories may be short, but the internet is forever, and if you scroll past the stories posted over the last 24 hours, you’ll get a reminder of the last time Fallon and Trump’s names were linked. It was September 2016, roughly two months before the election, when a mugging, giggling Fallon playfully tousled the hair of the Republican candidate for president.

It’s important to remember what we already knew about Trump by that point. The year prior, he’d launched his campaign with a disgusting speech depicting Mexicans as drug dealers and rapists. He’d already retweeted white nationalist propaganda that used fake statistics to criminalize African Americans. Trump had been very clear about his intention to ban Muslims from the country. At various campaign rallies, he'd encouraged his belligerent followers to “knock the crap” out of protesters, and called an attack on demonstrators in North Carolina “a beautiful thing.” The Access Hollywood tape hadn’t yet leaked, but there was already a lengthy list of women who alleged sexual harassment, and at least three women who had accused Trump of sexual assault. In short, it was already very clear who Trump was.

Fallon’s brand has been assiduously avoiding political commentary, even of the satirical sort, on his show. Unlike Stephen Colbert or Seth Meyers, both of whom now command more nightly viewers, Fallon has honed an image as the one place in late night where you can go if you want to completely ignore that the country is one giant tire fire. But in that moment, Fallon’s shtick went beyond middle-of-the-road goofiness. The comedian chose to treat Trump like a loveable scamp, instead of a vocally racist xenophobe and misogynist.

September 2016 was the moment to speak out about Trump — or at the very least, not treat him like half of a buddy comedy skit — as we neared the most consequential presidential election of our lifetimes.

Monday night, Fallon claimed he was “sick to [his] stomach” as he watched the Charlottesville coverage, “seeing Nazi flags and torches and white supremacists.” It’s amazing he’s only feeling queasy now, since those white supremacists were there all along, shouting their support for Trump during what felt like an endless campaign season.