According to Ted Nugent, his fellow right-wing rocker is "just having fun" with the idea of running for the Senate 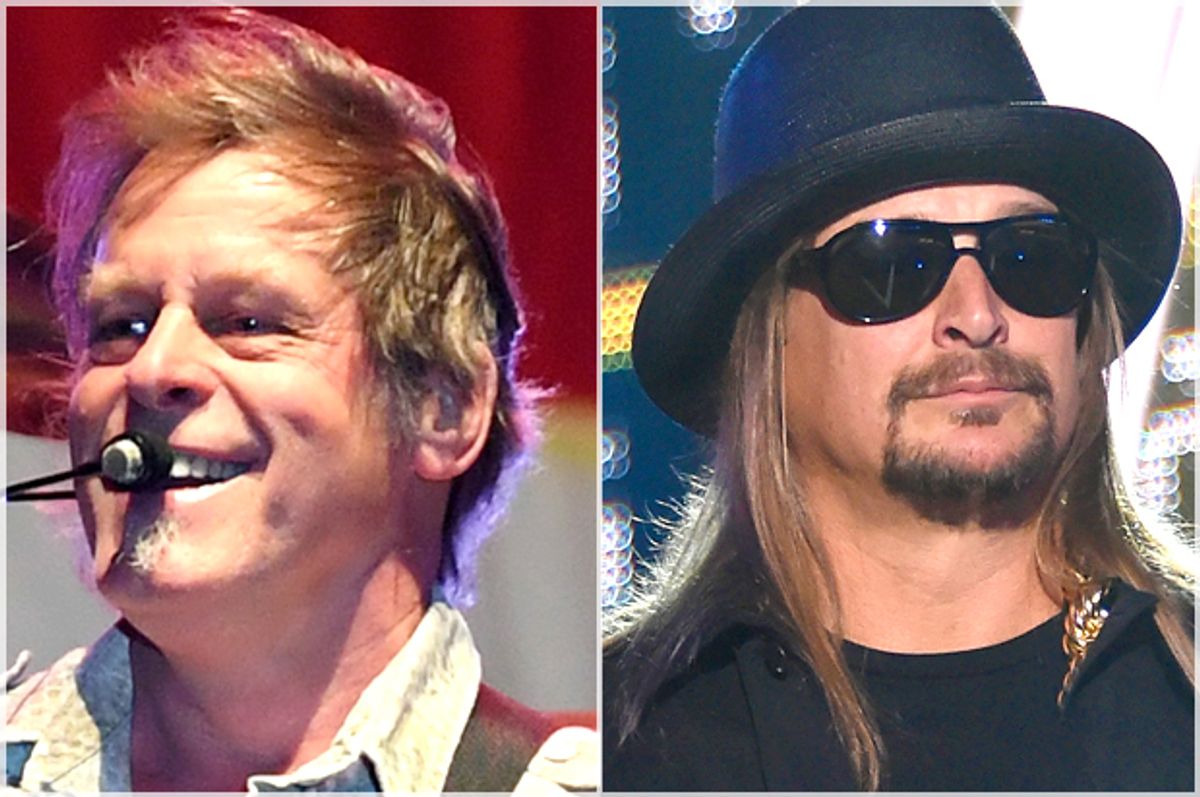 It's a tale of two right-wing rock stars: Kid Rock, who insists that he is seriously considering a run for the United States Senate, and Ted Nugent, who recently told a Michigan radio host that "Bob Ritchie ain't running for jack squat."

Nugent was not finished there, not by a long shot.

"He never intended — he never thought about it — and he never hinted that he's running for anything so the Michigan GOP better get their head out of their ass and start using their resources to focus on someone," Nugent said.

After WJR-AM host Frank Beckmann remarked that Nugent "just laid a scoop on us, man," Nugent repeated his earlier point.

"But Frank! He ain't running!" Nugent proclaimed. "He never thought of running. Somebody literally pulled it out of their ass and said, 'Hey, what about Kid Rock?' Kid Rock didn't know anything about it. He's just having fun with it because it's so silly."

Nugent later added, "It's starting to piss me off because it's a waste of the GOP energy. Kid Rock is not running for anything! He's going to rock and roll till the day he dies."

The comments of Nugent — who is reportedly a friend and collaborator of the Michigan rock star and visited the White House with him in April— were brought to wider attention via New York Times writer Sopan Dev's Twitter page.

Nugent's statements contradict those made by Kid Rock (aka Robert James Ritchie) last month. At the time, Ritchie claimed "When my name was thrown out there for US Senate I decided to launch kidrockforsenate.com. I was beyond overwhelmed with the response I received from community leaders, D.C. pundits, and blue-collar folks that are just simply tired of the extreme left and right bullshit."

Ritchie added, "We will be scheduling a press conference in the next 6 weeks or so to address this issue amongst others, and if I decide to throw my hat in the ring for US Senate, believe me . . . it’s game on mthrfkers."

Considering that Ritchie also bragged in that statement about how he planned on making money off of his potential Senate bid, it is not inconceivable that Nugent's assessment of the situation is accurate. Then again, Ritchie has at the very least put up the front of genuinely wanting to get elected to the Senate. If Nugent is wrong, Ritchie may feel pressured to clarify the situation sooner rather than later.