Trump, the alt-right and the Kremlin: White supremacists' Russia links are no secret

Neo-Nazis, white supremacists and Donald Trump all have deep ties to Russia — and this "conspiracy" isn't hidden 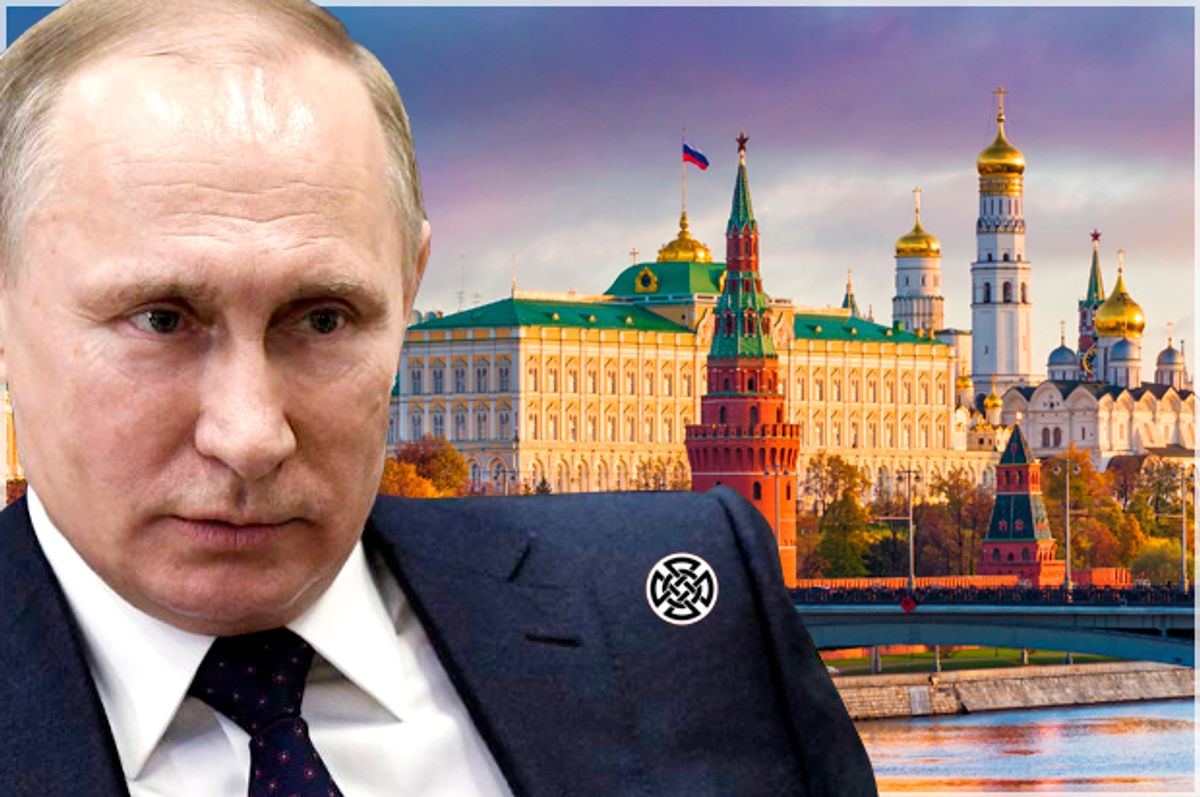 Most of America is probably still feeling overwhelmed by the events in Charlottesville last weekend and our president's outrageous reaction. Media reports suggest, however, that while Donald Trump has been even more volatile and short-tempered than usual lately, he is feeling a lot better after his Tuesday press conference, having freed himself of the burden of pretending to have a moral compass.

Refusing to pass judgment on allies and supporters, no matter what they do, is a fundamental characteristic of the man and a sincere reflection of his beliefs. This is the man, after all, who refused to condemn Russian President Vladimir Putin for killing political rivals and members of the press when Fox News' Bill O'Reilly pressed him on it, saying, “There are a lot of killers.You think our country’s so innocent?”

So it appears that letting off that steam on Tuesday made Trump feel a little more like himself. This has been a rough couple of weeks, even by the standards of his soap opera of a presidency. Indeed, looking back it seems that Trump started to come a bit more unglued than usual right about the time he learned that special counsel Robert Mueller had convened a grand jury in the Russia investigation and the FBI had staged an early morning search of former Trump campaign chair Paul Manafort's home.

We still don't know what Trump is so worried about, but he's definitely worried about something. Thinking about nuclear war and Nazi rallies was undoubtedly a nice distraction from whatever it is that's bothering him so much.

But whether the president knows it or not, even the Charlottesville "Unite the Right" rally has deep connections to the global white nationalist movement, and the epicenter of that movement is in Moscow under the leadership of Vladimir Putin. Take, for instance, Matthew Heimbach, who was crowned by Think Progress as the "most important white supremacist of 2016" and was one of the organizers of the Charlottesville event. Heimbach is the man who was arrested at a Trump campaign rally for pushing and screaming at a protester, and who later claimed in court that he believed Trump had "deputized" the crowd to defend him against the protesters.

Heimbach says, “Putin is the leader, really, of the anti-globalist forces around the world" and calls "Russia our most powerful ally" -- and by "our," he means the forces of white nationalism. The Southern Poverty Law Center dubbed him "The Little Führer." Heimbach is also a member of the World National Conservative Movement, a product of the Russian Imperial Movement (RIM):

The manifesto of the movement claims that the world is governed by the ideology of “liberalism, multiculturalism and tolerance.” This, in the view of the activists, results in “the erosion of nations, massive migration from countries with foreign civilizational bases, falling away from religion, replacement of spirituality by materialism, impoverishment of cultures, destruction of the family and healthy moral values” through “abortion, propaganda of debauchery and acceptance of sexual perversions”. Furthermore, the manifesto refers to the “super-national institutions” such as the EU and NATO, and argues that these forces represent “the global cabal” which, in the Russian cultural discourse, is essentially a euphemistic reference to the global Jewish conspiracy. The WNCM aims to counter liberalism and globalisation by staging a “conservative revolution” and bringing far right parties to power in Western societies.

That sounds strangely familiar doesn't it?

Heimbach isn't the only white supremacist Trump follower with a strong connection to Russia. Two years ago, The New York Times reported on a conference in St. Petersburg featuring a big name in right-wing hate:

Railing against same-sex marriage, immigration, New York financiers, radical Islam and globalization, among other targets, one speaker after another lauded Russia and President Vladimir V. Putin as a pillar of robust, conservative, even manly values. . . .

The United States, as the main adversary, attracted the most hostility, but a couple of American speakers received warm applause by painting Washington as an aggressor trying to export its misguided new values.

Jared Taylor, who runs a website called American Renaissance, said the descendants of white Europeans risked being swept away by a wave of Africans, Central Americans and Asians. The United States, which he said worshiped diversity rather than Christianity, “is the greatest enemy of tradition everywhere.”

Jared Taylor is credited with coining the term alt-right. Here he is explaining what it means:

You will recall that President Trump's strategic adviser Steve Bannon once described his far-right news site Breitbart as "the platform of the alt-right."

Neo-Nazi Richard Spencer, another organizer of the Unite the Right gathering, has praised Russia as the “sole white power in the world.” Spencer's wife, the Russian born Nina Kouprianova (from whom he is reportedly separated) has helped the movement by translating the influential neo-fascist Russian philosopher Alexander Dugin, who promotes what the Daily Beast describes as "the modern incarnation of 'Eurasianism,' a geopolitical theory positing Russia as the inheritor of 'Eternal Rome.'" Dugin has ties to virtually every American white supremacist leader in one way or another.

And then there's David Duke, the noted former Ku Klux Klan grand wizard who tweeted his gratitude for Trump's support after his raucous press conference on Tuesday and told TV interviewers in Charlottesville, "We are going to fulfill the promises of Donald Trump. That’s what we believed in, that’s why we voted for Donald Trump. Because he said he’s going to take our country back. That’s what we gotta do.”

Duke has said that Russia is the “key to white survival" and has spent quite a bit of time there. He has ties to Dugin as well.

After all the furious activity over the weekend, The Daily Stormer, the biggest neo-Nazi web site, was kicked off its American server. Wouldn't you know it? It landed at a Russian domain.

None of this is to say that there is a secret international white supremacist conspiracy led by Trump and Putin. After all, it isn't much of a secret: These ties are all out in the open. The point is that this is all of a piece: Trump's casual immorality, his admiration for Putin and his sympathy for the white supremacists in America and their "cause" are not separate issues.

It may indeed turn out that Trump or members of his campaign team colluded with the Russian government to win the election, or that he had illegal financial dealings with oligarchs and kleptocrats that made him vulnerable to blackmail. It could be both of those things or something else entirely. But regardless of his legal exposure, it's also clear that Trump is sincerely sympathetic to white nationalists who are devoted admirers of Vladimir Putin's white nationalism. How much he knows or understands about that connection is impossible to say. But it's yet another link between Donald Trump and Russia, and this one may be the most disturbing of all.