Why the GOP sides with the Klan and the Nazis

If you can’t win on issues, you win on racism. 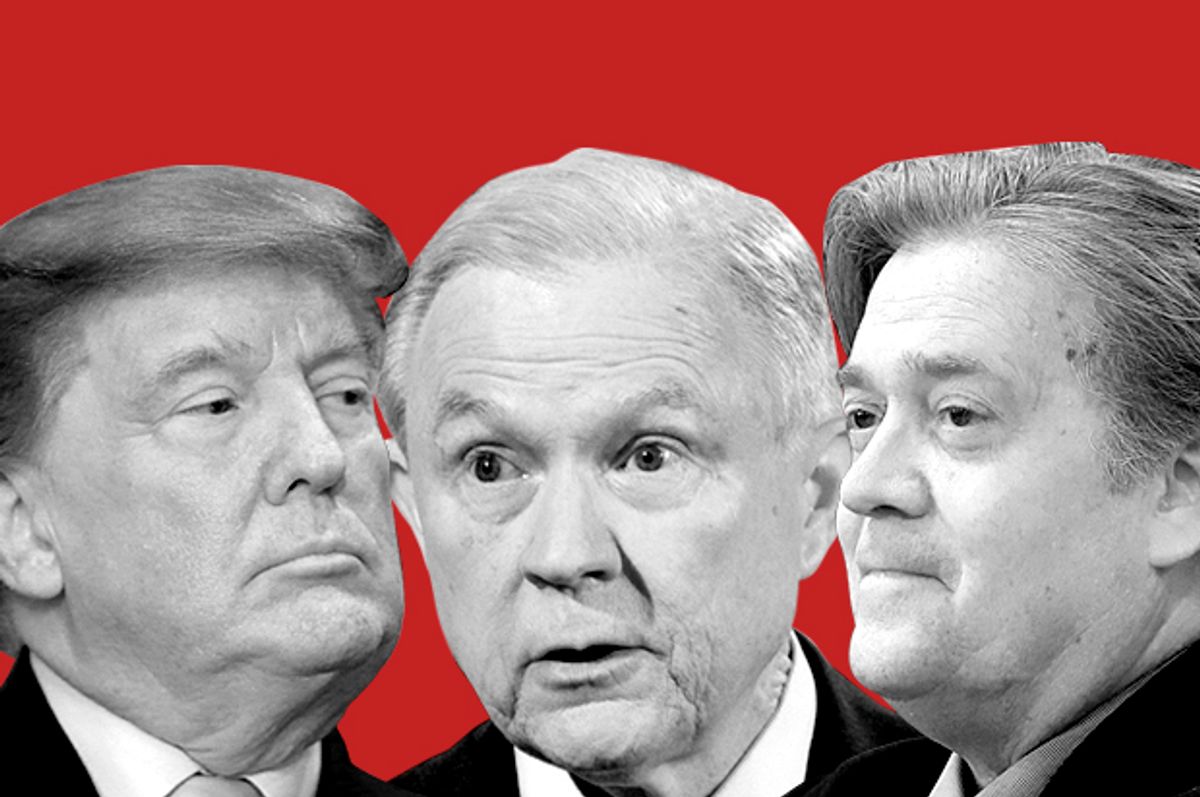 Why is it that the president and the vast majority of Republican elected officials are refusing to refer to the white Christian neo-nazis who committed mayhem and murder and, yes, terrorism, as exactly what they are? Why the false equivalence suggesting that antifascists and peace protesters are the same as Nazis and Klan members?

As Holly Yan of CNN summarizes on their website, ISIS has a long history of using vehicles as weapons for terror attacks. London, Stockholm, Nice, Berlin, Jerusalem, and, in North America, St.-Jean-sur-Richelieu, Quebec and Columbus, Ohio.

All these terrorists intentionally used cars or trucks to kill people and inflict maximum terror. All were condemned by Republicans and “conservative” media as “radical Islamic terrorism,” and any number of Republicans, including Trump, milked them for all they were worth.

Yet on August 12, members of the oldest terrorist organization in the United States — the Klan — along with devotees of one of Europe’s most terrible terrorist cults — Nazis — showed up in Charlottesville, Virginia, to reprise the Nazi and Klan traditions of torchlight nighttime parades specifically to create terror. And when asked about it, Trump waffled.

He’ll threaten North Korea with nukes, but won’t even name the terrorists who showed up in Virginia.

And it’s very, very hard to find an elected Republican (who isn’t a presidential wannabe) who will call this what it is: White Christian Racial Terrorism.

The answer is really simple: If you can’t win on issues, you go for what used to be called “wedge issues.”

The Republican Party has basically one goal and one reason for existence right now: to protect and promote the interests of the rich and powerful, be they billionaires or the big corporations that spawn them.

But no Republican will run a TV ad saying, “If elected, I promise to destroy the social safety net and give the money to the billionaires; I promise to increase the levels of pollution and cancer-causing chemicals in our food, air, and water; I promise to block renewable energy and increase your utility bills; I promise to cut the taxes of the fat-cats and record-profitable corporations, while throwing you a bone of a few hundred bucks.”

So what do they do? They create a “coalition.” They do, after all, need voters to put them into power (although it’s getting so tough for them that they have to rely on massive voter suppression among woke communities, and rigged voting machines and tabulators like were used against Governor Don Siegelman).

There are a number of American constituencies that really don’t care how big a tax cuts the billionaires get, whether health care and education are savaged, or how badly our environment is poisoned, because they consider their own issues to be so Far More Important.

These include the antiabortion/misogynists, the white supremacists, the anti-Semites, small-penis gun-nuts, and a very large group of white formerly middle-class people whose livelihoods have been wiped out by Reaganism and the so-called “free trade” policies that have been pushed by Republicans since Nixon.

Republicans need every vote. Even with Nixon committing treason in 1968 to win that election, he knew he still needed the votes of racist whites in the south — thus his new “GOP Southern Strategy” (building on the old “state’s rights” strategy in which, since Reconstruction, white politicians argued that the federal government had no business stopping southern states from literacy tests to vote to criminalizing sitting in a restaurant while black).

Reagan put it on steroids in 1980, when, as his first speech after getting the GOP nomination, he made the same pilgrimage Donald Trump Jr. more recently did to the Nebosha County Fair near Philadelphia, Mississippi, where three civil rights workers were murdered in 1964.

(Reagan infamously said, there: “I believe in state’s rights; . . . we’ve distorted the balance of our government today by giving powers that were never intended in the Constitution to that federal establishment. And if I do get the job I’m looking for, I’m going to devote myself to trying to reorder those priorities and to restore to the states and local communities those functions which properly belong there.”)

While this sort of racial dog-whistle politics is not new, at least prior to the election of Trump, in previous generations white supremacists wore hoods over their heads and didn’t much go out in public with their hate.

As Lee Atwater, one of Reagan’s main strategists and the father of the “Willie Horton” ads against Michael Dukakis in 1988, told a group of Republican activists in 1980, there was a new way to serve the rich while dog whistling to the rubes — just use “abstract” language:

“You start out in 1954 by saying, ‘Nigger, nigger, nigger.’ By 1968 you can't say ‘nigger’ — that hurts you. Backfires. So you say stuff like ‘forced busing,’ ‘states' rights’ and all that stuff. You're getting so abstract now you're talking about ‘cutting taxes,’ and all these things you're talking about are totally economic things and a byproduct of them is blacks get hurt worse than whites. And subconsciously maybe that is part of it. I'm not saying that. But I'm saying that if it is getting that abstract, and that coded, that we are doing away with the [Republican] racial problem one way or the other. You follow me — because obviously sitting around saying, ‘We want to cut this,’ is much more abstract than even the ‘busing’ thing, and a hell of a lot more abstract than ‘Nigger, nigger.’”

This is how Republicans talked for decades when nobody outside the party was listening. “Cutting federal spending” was a wink-and-a-nod for “no more benefits to people of color” — and still is today.

And the white racists who voted for Republicans post-1968 largely only showed their power at election time, and even then they didn’t wear their robes or carry Nazi or Klan symbols to the polls.

But with the election of Trump (whose father was arrested at a 1927 Klan rally), all that changed. After he claimed that “all sides” were engaged in hatred, bigotry, and violence on Saturday, Nazis and Klan members openly celebrated.

We should have seen this coming: a year and a half ago, on CNN, Trump refused to rebuke David Duke and the Klan.

You see, when you’re running a scam and need a lot of rubes to win elections, you don’t ever, ever, ever diss your rubes. This is why the GOP won’t talk (other than a few who aspire to higher office) about white supremacy.

The vast majority of the billionaires behind the Republican Party don’t give a rat’s ass about civil rights or the Klan, one way or the other.

They don’t care if working-class women can or can’t get abortions/birth-control, or if Bubba can buy a gun even if he’s certifiably insane (yes, Paul Ryan, Mitch McConnell and Trump did that).

They don’t care if the air and water are poisoned: they have super-fancy air filters for their mansions and yachts, and their own water supplies.

They could care less if Muslims are immigrating into the U.S.

And they certainly don’t give a damn about a dead Confederate general.

And they hugely care if they’re to be held accountable for the way they’re poisoning our world and paying people to lie to us about it.

So, with the support of a corrupt Supreme Court, they bought the Republican Party. And then got them all to sing the same tunes on the really important (to them) issues: climate change, deregulation/pollution, stealing federal lands, and cutting the top corporate and personal tax rates.

That the GOP would put America through all this racial and civil strife just to protect the interests of the few hundred billionaires and multi-millionaires who own them is mind-boggling.

That the Supreme Court would legalize it is obscene.

And that Trump would play racial politics in America in such a divisive and blatant way from the platform of the presidency proves he’s unfit for office.