Why D.C.'s escape artist Mister Miracle is the hero we need right now

In a new run by Tom King and Mitch Gerads, the Jack Kirby creation fights depression and Trumpian anxiety 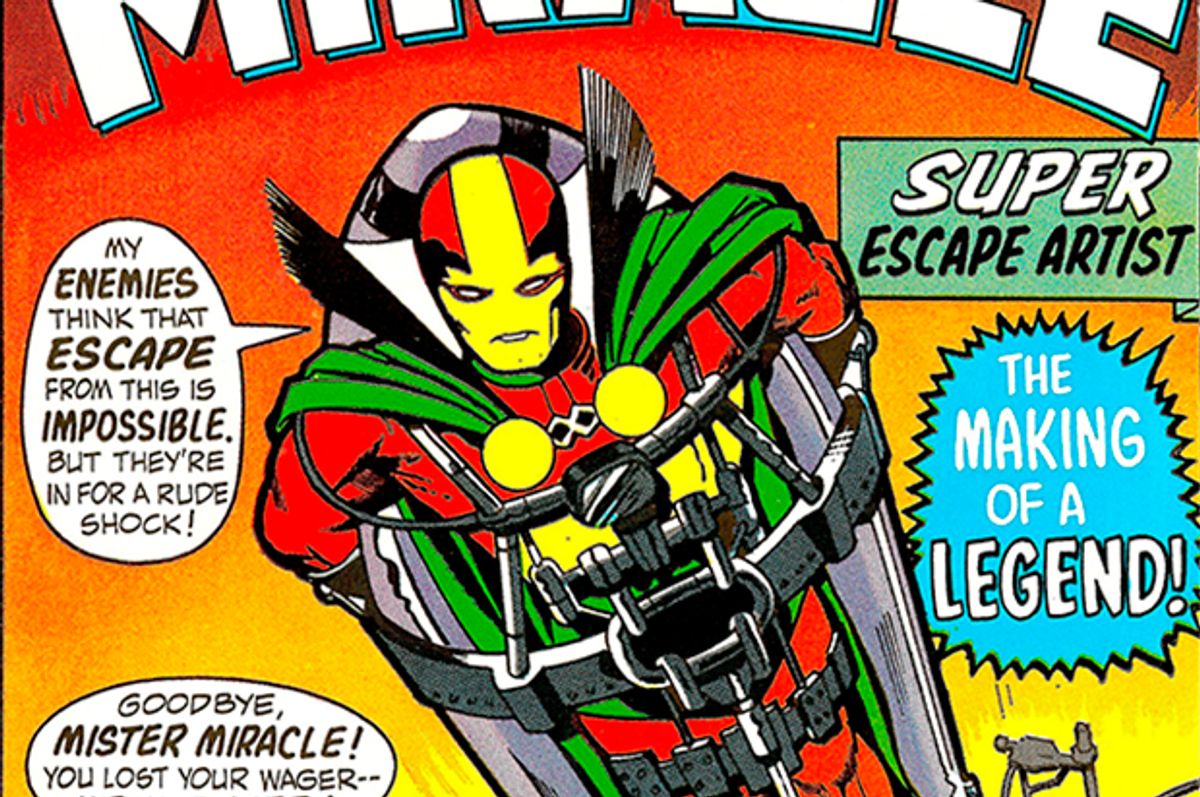 That's all well and good, but Mister Miracle is a timely hero for reasons that have nothing to do with his creator.

All superheroes have psychological resonance. Superman symbolizes the inner hero in us all. Wonder Woman symbolizes the power of women. Spider-Man is about taking responsibility for your actions (and inactions).

As an escape artist, Mister Miracle speaks to the universal feeling of being trapped. We all feel trapped sometimes by our histories, minds, bodies and circumstances, but as America has gone to hell, the trap has extra layers. Mister Miracle, created by comics’ greatest mad genius and led by the best creative team today, can inspire us to escape to a better world -- by making one.

Mister Miracle (real name Scott Free, I shit you not) is one of two children who are key to Kirby’s complex sci-fi mythology called the Fourth World, which many believe was a direct inspiration for "Star Wars." Kirby, much like Mister Miracle breaking free of a deathtrap, was energized by leaving Marvel, and he put that energy into an interlocking epic told in "The Forever People,"Mister Miracle," "The New Gods” and — weirdly — "Superman’s Pal Jimmy Olsen." In this massive battle between good and evil, Mister Miracle was a key player.

In the most extraordinary issue of "The New Gods," Kirby took a breather from the main story to explain the backstory of the rival worlds New Genesis and Apokolips, which were basically heaven and hell. In New Gods #7, Kirby told the story of "The Pact," in which, long ago, the rulers of New Genesis (Highfather) and Apokolips (Darkseid) made a deal: they would exchange their young sons, creating a double-hostage situation that would give both sides an incentive for peace.

So Orion — son of the war-loving, freedom-hating Darkseid — was raised by the peaceful Highfather. Meanwhile, Highfather’s son Scott Free grew up in Apokolips’ sick world of fascism, torture, starvation, firepits and the worst orphanage in the multiverse, run by Darkseid’s henchbiddy, Granny Goodness.

As an adult, Mister Miracle is not only a god and a hero, but a performer and an escape artist. Kirby apparently was inspired by another legendary writer and artist, Jim Steranko, a magician and escape artist himself. Issue 35 of "Jack Kirby Collector" makes a compelling case for Scott Free as being particularly close to Kirby’s heart. Editor John Morrow notes, "Escape was a part of Jack’s life, from beginning to end." Among Kirby’s bust-outs were emerging from poverty on the Lower East Side as a boy, eluding death as a scout during World War II and fleeing the credit-hoarding world of Stan Lee and Marvel Comics in 1970.

Kirby’s work often played with pagan mythologies or made up new pantheons, but the Fourth World might be his most Judeo-Christian work, as Tom King learned when working on "Mister Miracle." As King told Paste Magazine, "When I first started doing this project, I started talking with creators like Mark Waid and one of the things I came across was people saying, you didn’t know Mister Miracle was Jack Kirby’s Jesus? He’s Jesus as an escape artist."

Superman has also been compared to Jesus, but Clark Kent had it easy, growing up in a crucifixion-free world where he was not only indestructible, but raised by sweet parents on a Kansas farm. Scott Free was sent to Apokolips as a sacrificial lamb to keep the peace, with only the firepits to keep him warm.

Despite this awful upbringing, Free has usually been portrayed as an upbeat guy, happily married to Big Barda (yet another crazily named Kirby character) and delighting in his many escapes. Issue #1, by King and Gerads, brings Free down to Earth. Without giving away too many of the details, I can say the first two issues are (among other things) a crushingly accurate portrayal of depression, showing one of the most fanciful characters in comics history suffering the most raw and relatable of mental struggles. Scott Free can escape any cage or cuffs, but like any of us, he can’t get out of his own mind. Also like us, he’s living in a world that feels closer to doomsday every moment.

Speaking of our impending doom, in a recent interview with CBR, writer King mentioned how he’s trying to capture the current moment in an indirect way, not with Trump-bashing but by expressing, ". . . this feeling we all have, this paranoia we all have. You wake up every day, and you’re not in the world you once thought it was. The rules that your parents taught you, the rules of life don’t make sense anymore, and you get this feeling that you’re just trapped here, like you can’t get out, no matter what you do. You’re stuck here."

Mister Miracle’s various traps — mental, physical and metaphysical — are shown and suggested via career-best work from artist Gerads. His expressive, realistic faces and detailed, documentary approach have made him an expert at telling war stories (like "The Sheriff of Babylon," also written by King).

Gerads brings an earthy sensibility to Kirby’s New Gods, and they’ve brought something new and wild out of Gerads, who merges the inexplicable and everyday like David Lynch with a handheld camera. King has said that reading Kirby’s Fourth World is like "dipping your head into madness." Clearly, Gerads has taken the same plunge. His compositions and colors build new realms within the already insane Kirbyverse, but the clarity of the emotions builds a solid bridge to our own fragile world.

This series is off to a triumphant start that would make the relentless innovator Kirby proud. Despite the topic of escape, "Mister Miracle" is far, far from escapism: King and Gerads have launched a demanding series that will wreck your mind and wring out your emotions. But it also offers hope that Mister Miracle can defeat the parademons of Darkseid and the far worse demons of despair. Maybe we can too.