There have never been "many sides" to American racial terror 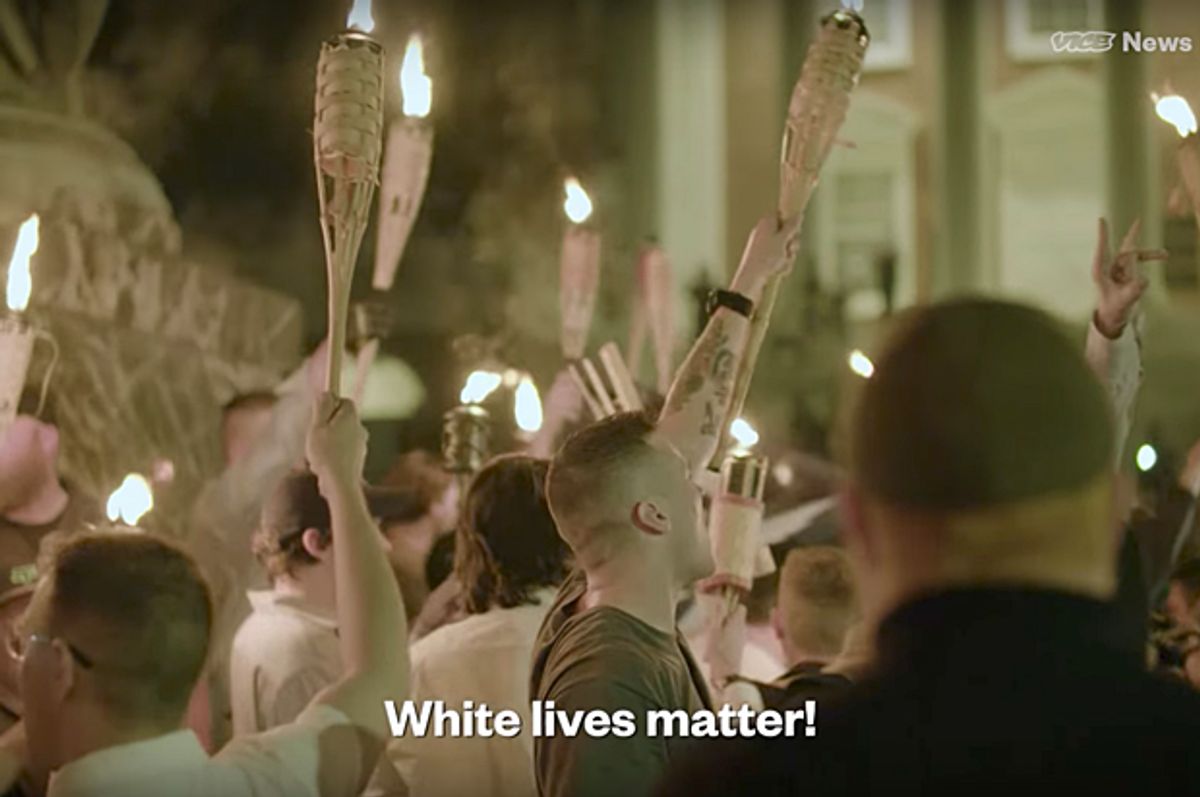 When thousands of white supremacists converged on Charlottesville, Virginia this weekend, angered by the city’s plans to remove Confederate monuments, they employed the terrorist tactics of the KKK.  They marched through the city and the University of Virginia carrying torches and shouting vile racist slogans.  And on Saturday, terror became murder as a reported white supremacist rammed his car through a crowd of counter-protestors, killing Heather Heyer, injuring over 30 others, and contributing to the deaths of two state troopers.

As the situation in Charlottesville continued to devolve, President Trump remained silent.  When he finally spoke, the same President who sharply criticized his predecessor for declining to use the term “radical Islamic terrorism,” said not a word about the white supremacist ideology that birthed this latest act of domestic terrorism.  Instead, he implied that no one group or ideology was responsible, blaming “many sides” for the “hatred, bigotry and violence.”

Days later, it appeared the President had finally come to his senses and offered a short condemnation of white supremacism, neo-Nazis, and the KKK. However, his too little, too late denunciation was quickly undermined by his inflammatory remarks on Tuesday, where he reiterated, “I think there’s blame on both sides, and I have no doubt about it.”

President Trump’s assertion that “both sides” are responsible for the racial hatred and violence in Charlottesville is false. The white supremacists that gathered on Saturday proudly flaunted their arsenal of automatic weapons and shields. They relied not only on their weapons, but also on Nazi and Confederate imagery to try to intimidate counter-protestors.

President Trump’s statement is also at war with our nation’s history. Racial hatred and violence have not, and have never been, equally shared among different groups in our country. Instead, they have been the province of white supremacists, whose terrorist activities have been made possible by the failure of our laws, and those responsible for enforcing them, to protect Black Americans.

Impunity for white terrorism was once codified by law. Virginia’s slave code stated that if any slave “shall happen to be killed” in the course of a “correcting” by his master, “the master . . . shall be free and acquit[ted] of all punishment . . . as if such accident never happened.”

The end of slavery did not end impunity for domestic terrorism by white supremacists. As the Supreme Court noted in a recent opinion, after the Civil War, “the South began a practice that would continue for many decades: All-white juries . . . refusing to punish violence by whites, including Ku Klux Klan members, against blacks and Republicans.” For instance, in 1865 and 1866, all-white juries in Texas considered 500 cases where white defendants were charged with killing Blacks. Every single white defendant was acquitted.

Between 1877 and 1950, almost 4,000 African Americans were lynched in a dozen Southern states. As explained in a 2015 report by the Equal Justice Initiative, these “[l]ynchings were violent and public acts of torture that traumatized black people throughout the country and were largely tolerated by state and federal officials.”

White supremacist terrorism continued throughout the civil rights movement.  In 1965, Jimmie Lee Jackson was murdered by a state trooper near Selma, Alabama while attempting to provide aid to his mother who was ruthlessly beaten during a peaceful march for voting rights.  Two years earlier, the KKK bombed the 16th Street Baptist Church in Birmingham, murdering Addie Mae Collins, Cynthia Wesley, Carole Robertson and Denise McNair.

White supremacist terrorism never disappeared, and it has been emboldened over the past year by the actions and rhetoric of President Trump and his surrogates. The only way for the terror to end is for our Government to stop tolerating it.  The Department of Justice must investigate and prosecute the individuals and groups who not only commit acts of white supremacist terror, but also those who finance and support it. It is long past time to stop doing what Virginia’s slave code required: acting as if violence against Blacks by whites “never happened.”

Samuel Spital is the Director of Litigation at the NAACP Legal Defense & Educational Fund, Inc.