From Bee to Colbert and from Kimmel to Jefferies, these are the 10 best Trump late-night Trump takes 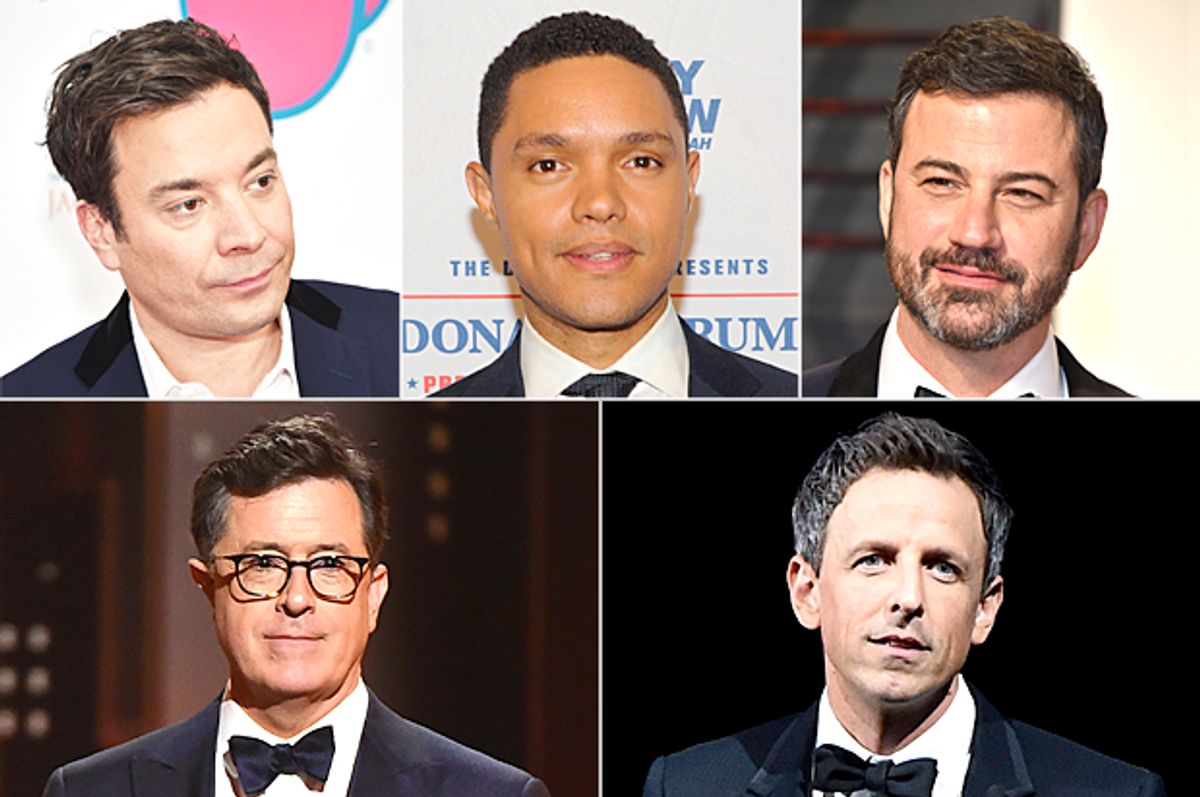 With Donald Trump as president, and the wild, incessant news cycle he has created, late-night shows from "Jimmy Kimmel Live" to "Full Frontal with Samantha Bee" have helped Americans maintain at least some level of sanity by extracting humor from all the madness.

For the past eight months, late night has held the Trump administration accountable, providing laughs along the way. But the monologues and skits are not just entertainment; they're a historical record of the president's daily misadventures.

Some late-night hosts, such as Seth Meyers and the disciples of Jon Stewart, were already proficient in political satire. But other late-night comedians, such as Jimmy Kimmel and Conan O'Brien, had to recalibrate their comedy in order to meet the demands of this presidency.

"Sometimes it goes from funny to mean," Spicer told Sean Hannity in his exit interview on Fox News. Sorry, Spicey, but you set yourself up for this one.

Take a look at what we — and most people with a sense of humor — would call the 10 funniest, most insightful moments of mockery from 2017's late-night laugh cycle :

10. Conan O'Brien's "phone call" between Trump and Obama
One of the best ongoing bits on late night in 2017 is O'Brien's faux phone calls between the current and former presidents. The funniest of these came during the height of Trump's travel ban, which barred people from seven Muslim-majority countries from entering the U.S.

9. Jon Stewart makes a surprise appearance on "The Late Show"
Trump was a little trigger happy at the beginning of his presidency, signing a ridiculous number of executive orders during the first moments of his young tenure. Stewart, whose untimely retirement created a void on late night, found a platform on "The Late Show with Stephen Colbert" to offer his critique of the Trump administration. Stewart casually strolled on stage wearing a rodent on his head and an absurdly long tie. The jokes that followed were a blessing for all.

7. Jim Jefferies studies the battle over Confederate monuments
Australian comedian Jim Jefferies just could not understand why some Americans still fetishize Confederate statues, so he went to talk to people representing both sides of the debate. Turns out, a lot of people defending the monuments are sympathetic to white supremacists (shocker, we know).

6. Seth Meyers takes a closer look at James Comey's firing
The White House seems to have entered a new phase of madness following Trump's response to deadly protests in Charlottesville, Virginia. But perhaps the craziest development of the Trump era was the firing of former FBI Director James Comey. "Late Night" host Seth Meyers expertly explained that week in May what the hell had happened — and just how foolishly Trump handled the entire situation.

5. Trevor Noah reacts to Bill O'Reilly's departure from Fox News
When Bill O'Reilly left Fox News amidst a damning sexual harassment scandal, the late-night hosts had a field day. "The Daily Show" host Trevor Noah supplied, perhaps, the best mockery of the occasion. "You may not know this, but Bill O'Reilly was the biggest figure in cable news," Noah said during his monologue. "At one point, nobody even came close because they were afraid that he might sexually harass them."

4. Stephen Colbert interviews Anthony Scaramucci
When it comes to ridiculing the president, Colbert has been the most consistently pointed and funny late-night host of 2017 (perhaps that's why his ratings have skyrocketed). While Colbert's monologues are worthy of praise, it was his interview with former incoming White House communications director Anthony Scaramucci that stands out as an example of what the host is capable of on his best nights. Colbert held Scaramucci's feet to the fire, while throwing in a joke or two for good measure.

3. John Oliver dives into the relationship between Trump and the truth
HBO's "Last Week Tonight" is at its best when the show does exploratory research on obscure social issues. But host John Oliver's best episode this season was his look at Trump's broken relationship with the truth. Oliver hung a lot of our commander-in-chief's disconnect with reality on the shoulders of manic conspiracy theorist/vitamin salesman Alex Jones.

2. Jimmy Kimmel pleads with Trump voters to admit their mistake
Kimmel is not known for his political comedy. Yet, this week, Kimmel flipped the script to address Trump's unhinged press conference on the Charlottesville protest. Kimmel first asked his Trump-voting viewers to look inwards at their errors, before offering a solution that could save America.

1. Melissa McCarthy lampoons a Sean Spicer press briefing
Not much has to be said here, expect perhaps for that fact that this magical moment was so good, some say its caused Spicer's ultimate downfall.