Forget the liberal smears: Leftists aren't covertly aiding the alt-right — they're battling it

Liberals and centrists use Charlottesville as another opportunity to demonize the activist left. It's not working 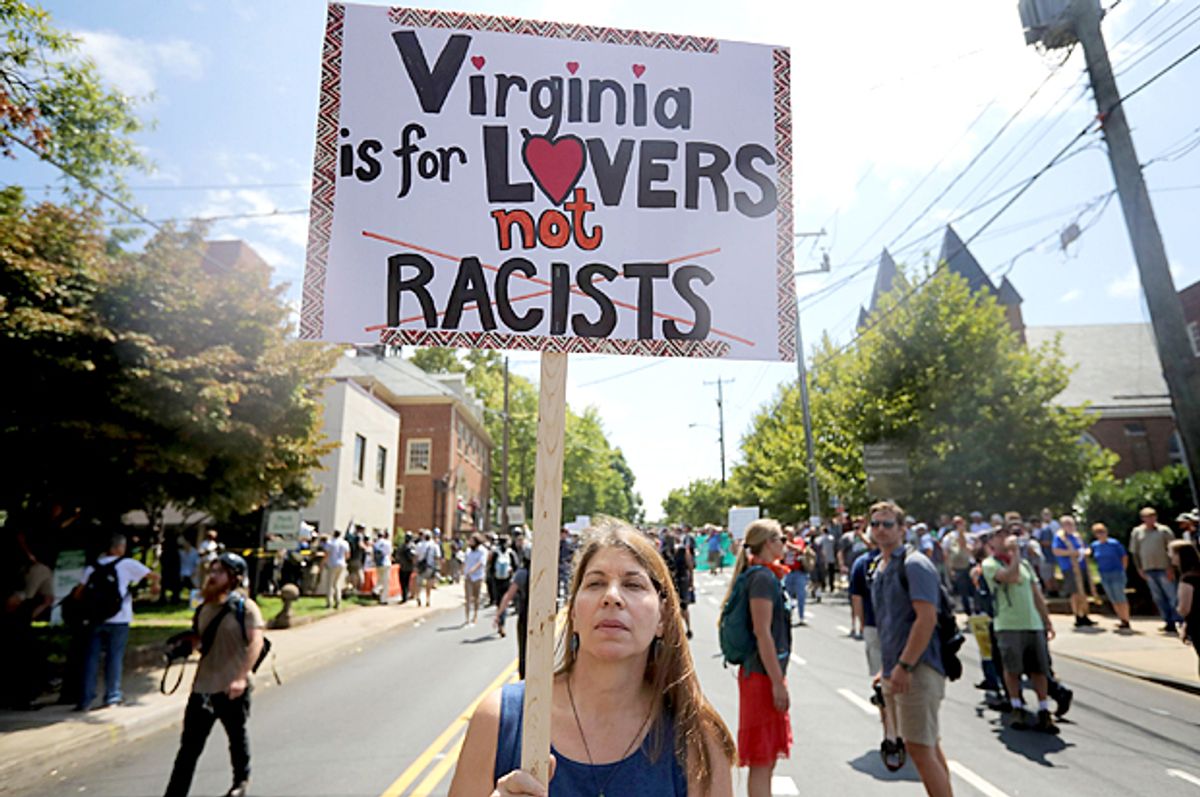 A counter-demonstrator marches down the street after the 'Unite the Right' rally was declared an unlawful gathering. (Getty/Chip Somodevilla)
--

During the demonstrations in Charlottesville last weekend, hours before James Alex Fields Jr. plowed his Dodge Challenger into a crowd of counter-protesters on the street — leaving one woman dead and many other people critically injured — many centrists and liberals couldn’t help but use the spectacle of neo-Nazis and fascists coming together on the streets for a cynical attack on the progressive left.

“If the Bernie Bros wanted to make a show of force on behalf of progressive values, Saturday in Charlottesville would be a good time,” tweeted Mieke Eoyang, the vice president of centrist think tank “Third Way,” implying that supporters of Bernie Sanders don’t stand for progressive values where it really counts (i.e., in opposing racism and fascism). Neera Tanden, the president of the Center for American Progress, also logged on to Twitter to take a swipe at those to her left:

This remark was clearly aimed at left-wingers who have been critical of the Democratic Party, with the implication being that leftists are more interested in picking on liberals than fighting fascists, and have been helping the latter by dividing the “progressive side.”

These comments and others like them were cynical and disingenuous for a number of reasons. They became particularly shameful after the terrorist attack that occurred later that day, as it was left-wing activists from groups like the Democratic Socialists of America (DSA), the Industrial Workers of the World (IWW) and Black Lives Matter who were on the front line protesting the neo-Nazis, and who ultimately put their bodies in harm’s way. Heather Heyer, the 32-year-old woman who lost her life in the attack, was a progressive activist and Sanders supporter; if we must put it in these terms, she was a "Bernie Bro.”

One day before the Charlottesville demonstrations, the Washington Post’s Dana Milbank published a column promoting the same “Bernie Bro” narrative that center-left liberals have been spreading since last year’s Democratic primaries. In a piece slamming “Bernie Bros and sisters” (at least Milbank acknowledges that millions of women also supported Sanders), the Post columnist argued that progressives are coming to the Republican Party’s rescue by “sowing division in the Democratic Party and attempting to enact a purge of the ideologically impure.” The left-wing “purity police,” continued Milbank, are emulating the mistakes of the Tea Party movement “that made the Republican Party the ungovernable mess it is today.”

Consistent throughout these centrist or liberal criticisms of the progressive left is the notion that leftists are inadvertently (or perhaps deliberately) helping those on the right, whether it’s Republicans in congress or armed fascists in Charlottesville. The “Bernie Bro” trope, which remains fashionable among Beltway insiders even a year after being discredited, puts forward two seemingly contradictory ideas: first, that Sanders supporters are “purity police” who will never win elections because they are too rigidly dogmatic and progressive, and second, that Sanders supporters are mostly white male reactionaries who loved Bernie solely because he was a white man (and detested Hillary Clinton because she was a woman).

The latter claim never had much validity, and was debunked back in early 2016 when voter turnout and polling data revealed that support for Sanders was based more on age than gender or race. Younger adults, including young women, overwhelmingly supported the Vermont senator over Clinton. Yet more than a year after the primaries ended, Clintonites remain committed to this fabrication. When progressives criticized potential 2020 Democratic candidates Sen. Kamala Harris and Sen. Cory Booker for their neoliberal politics last month, for example, some liberals reflexively charged the left with sexism and racism.

In an excellent article responding to these allegations for Current Affairs, Briahna Joy Gray points out that some of the most prominent leftists criticizing centrist Democrats like Booker and Harris are, in fact, women and people of color. The “bro” stereotype “entirely erased the perspectives of countless women and people of color who did not share the center-left political position,” writes Gray, who notes that a simplistic and cynical version of identity politics has been used “to derail progressives whose record of commitment to racial justice, gender equality, and LGBT issues has historically eclipsed that of the Democratic Party itself.”

The second major tenet of the Bernie bro mythology — that Bernie supporters engage in “purity politics” — is less patently offensive, and on the surface more plausible. Progressives are, after all, passionate about their political beliefs, and care about whether a politician is genuine in his or her political convictions. But the notion that left-wingers are starry-eyed idealists who will rescue the GOP if they don’t fall in line and play nice with the Democratic establishment has about as much veracity to it as the notion that Bernie supporters are a bunch of white male “dude-bros.” Indeed, many liberals seem to have already forgotten that it was the “pragmatic” leadership of the Democratic establishment that led to the nationwide collapse of the Democratic Party and to Donald Trump in the White House.

The reality is that the “Bernie bros and sisters” are the pragmatic ones in this dispute, and have a much better understanding of the current populist mood in America. This has been on full display over the past several months, as liberals have become more and more hysterical and obsessed with Russia and the DNC hack, while progressives have made the fight for universal health care their No. 1 priority (next to resisting the Trump administration and neo-Nazis). A Bloomberg survey from last month revealed which side is more in tune with the American public: A plurality of Americans (35 percent) believe that health care is the most important issue facing the country, while only 6 percent think that our “relationship with Russia” is the top issue. Furthermore, polls indicate that a growing number of Americans — a majority in many cases — support universal health care.

It seems clear, then, that the progressive left is trying to rescue the Democrats from themselves. It also appears that centrists and many liberals are not interested in having an honest debate, and would rather smear progressives (e.g., the “Bernie bros” or the “alt-left”) than engage in good-faith discussion. Even after young progressives were killed and injured on the streets of Charlottesville protesting neo-Nazis, liberals continued their smear campaign:

“The Alt Left, in their drive to smear the ‘impurity’ of Clinton on economic justice issues, excused the racism and bigotry that is Trumpism,” tweeted a prominent liberal and editor for the website Daily Kos on Sunday.

Only when progressives unconditionally embrace the hegemony of Democratic Party leaders and their neoliberal policies, it seems, will mainstream liberals stop smearing them.