How the Rolling Stones went disco: Inside the making of "Miss You"

"Keith went mad, but it sounded great on the dance floor" 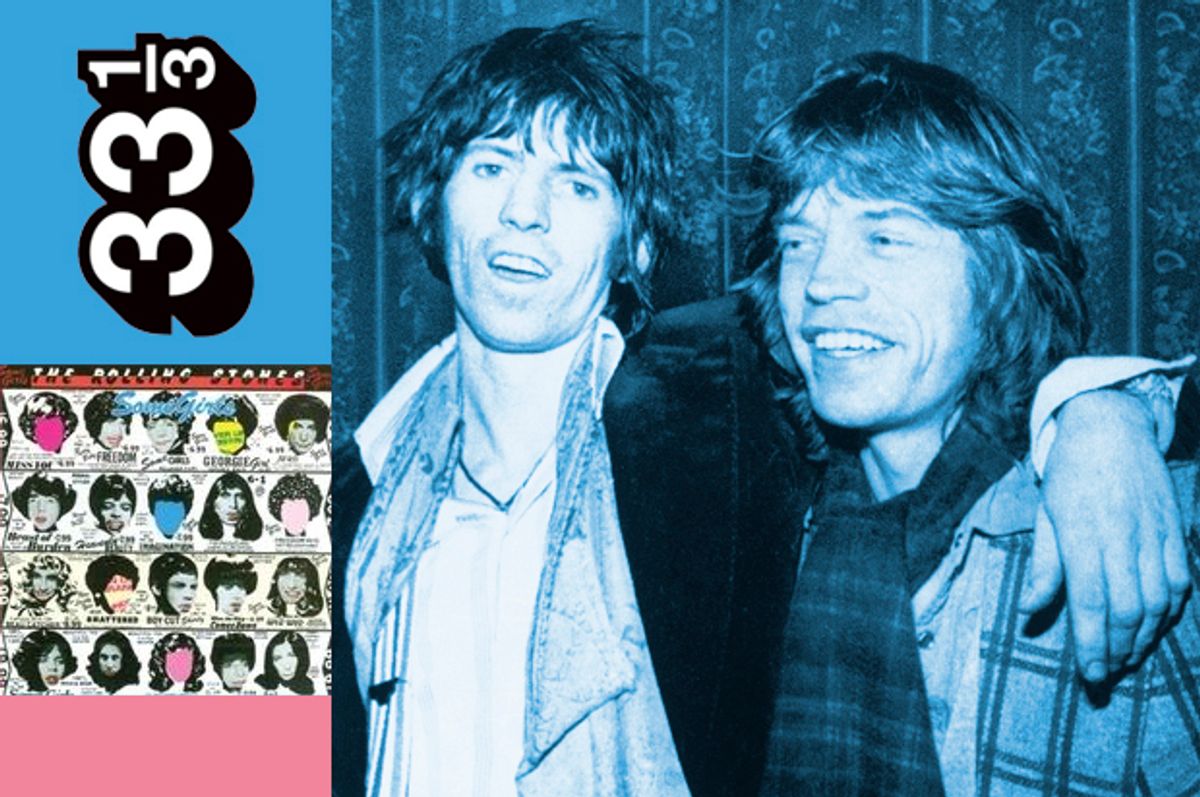 Excerpted from "The Rolling Stones' Some Girls" by Cyrus R.K. Patell (Bloomsbury, 2011). Reprinted with permission from Bloomsbury Publishing.

Written in A minor, the song begins with a catchy guitar riff that will turn out to echo the vocal melody over an insistent “four-on-the floor” bass drum from Charlie Watts. In the third measure, the snare drum kicks in, and the guitar line is echoed by a harmonica two measures later. The sound is unmistakable if you’re listening to the album in the summer of 1978: it’s the Stones doing disco.

“Disco was [in the air] when ‘Miss You’ came around,” Ron Wood would later say. “We didn’t get together and say, ‘Let’s make a disco song.’ It was a rhythm that was popular and so we made a song like that.” According to Charlie Watts, “Miss You” was “heavily influenced by going to the discos. You can hear it in a lot of those ‘four on the floor’ rhythms and Philadelphia-style drumming.” Declaring that “in the 1970s . . . there were some fantastic dance records out,” Watts recalls that “Mick and I used to go to discos a lot. A great way to hear a dance record is by listening to it in a dance hall or disco — I used to go to dance halls to look at the drummers when I was a kid.” Richards, of course, was more dismissive: “We didn’t think much of ‘Miss You’ when we were doing it,” he said later.

It was “Aah, Mick’s been to the disco and has come out humming some other song.” It’s a result of all the nights Mick spent at Studio 54 and coming up with that beat, that four on the floor. And he said, add the melody to the beat. We just thought we’d put our oar in on Mick wanting to do some disco shit, keep the man happy. But as we got into it, it became quite an interesting beat. And we realized, maybe we’ve got a quintessential disco thing here. And out of it we got a huge hit. The rest of the album doesn’t sound anything like "Miss You."

According to Watts, “Keith went mad, but it sounded great on the dance floor.” The musical context for “Miss You” includes songs like the Village People’s “YMCA” (1978), which Watts recalls Jagger singing on their way home from a dance club in Munich after a night at a club, and the more complex songs by Earth, Wind & Fire, which Watts deemed “fabulous.” Jagger would insist however, that “Miss You” wasn’t simply a disco song: “‘Miss You’ wasn’t disco disco. Disco records at that time didn’t have guitars much, and they all had shimmering string lines and oo-eeoo-ee girls. It was influenced by it, but not it. I like that.” The chorus of “Miss You” offers us the Stones’ take on disco’s “oo-eeoo-ee” via Jagger’s falsetto doubling of the song’s signature guitar line, and it’s both compelling and arch at the same time.

One of the elements that make the song unforgettable is the harmonica work contributed by a street musician named James Whiting, who played under the name “Sugar Blue.” Whiting was a 22-year-old from Harlem, who was in Paris subsisting on what he could make playing harmonica in the Paris Metro. Jagger told Rolling Stone, “Sandy Whitelaw discovered him playing in the Paris Metro. He’s a blues harpist from America, and he plays not only in the subway but also in a club called La Vielle Grille. He’s a very strange and talented musician.” Wood would later recall Sugar Blue’s playing with admiration: “The thing that blew my mind was what that guy could do, because I play a little harmonica. I know how to suck and bend, blow and bend like Jimmy Reed, but if you gave a harmonica to Sugar Blue, he could play in C, C sharp, C flat, B, A and F, all on the one harmonica. The way he bent it was unreal.”

Sugar Blue was one of the few session musicians who played on Some Girls. The others were Mel Collins, who had played with King Crimson, on the saxophone and the Faces’ keyboardist Ian McLagan on electric piano. The liner notes for “Shattered” list three mystery guests on “percussion” — “1 Moroccan, 1 Jew, 1 Wasp.” In his memoir All the Rage (2000), McLagan writes that Bad Company’s Simon Kirke played congas on the track.

Rolling Stone magazine would laud the Stones for “ditch[ing] the vacuousness of Billy Preston,” but in fact Preston inadvertently played a large role in the success of the album by suggesting the bass line that would become a key component of “Miss You,” which was the album’s first single. The song was mixed as a 45 in New York by Bob Clearmountain, who also helped produce an eight-minute version to be played in discos: it would be the band’s first 12-inch single. Some copies of the 12-inch were pressed in pink vinyl. (Mine, alas, has gone the way of all things.) A 7:33 minute version of the song appears on the compilation album Rarities, 1971–2003, and the accompanying liner notes tell us that, with Clearmountain’s help, “Jagger took the basic tracks and extended them, looping the distinctive bass line and electric piano figures, then adding ad-libbed guitar crosstalk and the harmonica of Sugar Blue, a Chicago native the Stones discovered playing in a Paris metro station.” “Miss You” spent 7 weeks on the UK charts, eventually reached No. 3, but it was a much bigger hit in the US, where it would spend 20 weeks on the charts — longer than any of the band’s previous 29 singles — eventually reaching No. 1, the last Stones single to achieve that feat.

Jagger and Clearmountain punch up the bass line on the 12-inch, and if you listen to that version you quickly understand how integral the bass line is to the overall effect of the song, even in its shorter version.

Richards, who was frequently dismissive of Wyman’s contributions to the band, praised Wyman’s work on “Miss You.” In an interview with Melody Maker in 1979, Richards said:

Bill is leaping ahead. Charlie is so magnificent you expect him to go on getting better, and if it doesn’t get better at a session you sorta moan at him, “Why aren’t you better than last time ’cos you always are!” Bill tends to go more in cycles, and in the last couple of years I haven’t seen him so happy and playing so well. Something like “Miss You” proves it.

Wyman himself credited the much-maligned Billy Preston with the inspiration for the song’s bass part:

The idea for the bass lines came from Billy Preston. We’d cut a rough demo a year earlier after a recording session. I’d already gone home and Billy picked up my old bass when they started running through that song. When we finally came to do the tune, the boys said, “Why don’t you work around Billy’s ideas?” I listened to it, heard that basic run, and took it from there. It took some polishing, but the basic idea was Billy’s.

Engineer Charles Kimsey remembers that “‘Miss You’ took quite a time to come together. Bill needed to go to quite a few clubs before he got that bass line sorted out. But he did sort it out, and bless him, it made that song.”