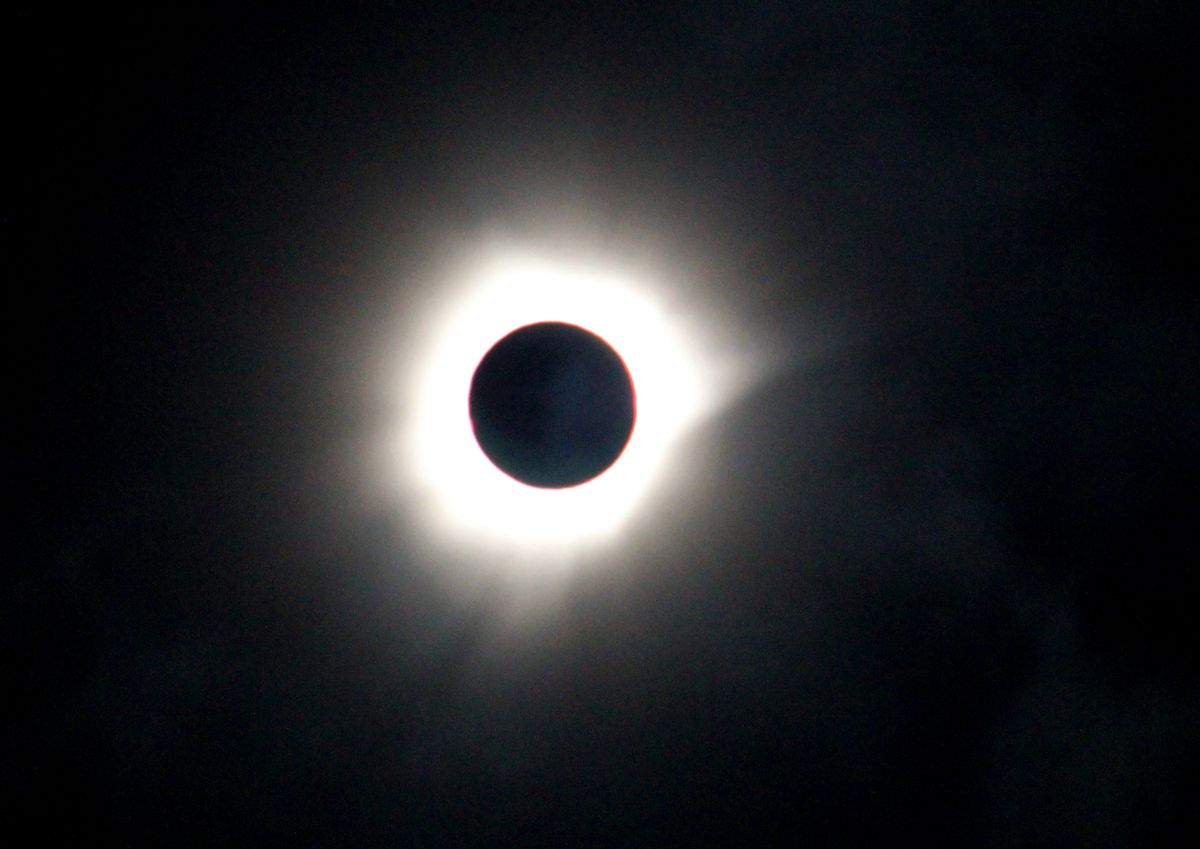 Whether this is your first or your 30th total solar eclipse, we all share one desire — to let the awe of this extraordinarily rare experience wash over us. You never know how 161 seconds of darkness in the middle of day may change your life. I've attempted to see five solar eclipses and succeeded three times. Each one has enlarged my spirit, become a touchstone moment, and set me off on new adventures as I confidently predict the August 21st event will for you.

I joined members of the Chicago Astronomical Society for my first eclipse on March 7, 1970. After a long bus ride a couple days before the event, we arrived in Fort Stewart, Georgia, just outside of Savannah. I was 16 years old and hanging with a crew that included men who still wore coats and ties to club meetings. The younger set, who'd recently let their sideburns grow, were heavily into optics and electronics. One amateur's scope featured a tube decorated with a wrap of black and white Moire interference patterns, a nod to the psychedelic spirit of the time.

We were allowed to set up our telescopes in a big field at the Army base. Eclipse day began mostly clear but clouds gradually moved in and temperatures dropped, especially as the 12:38 p.m. totality approached. While we experienced several minutes of darkness much like early twilight on a gray, northern-winter afternoon, no one saw the totally-eclipsed sun. Naturally, we were all disappointed but I came away from the whole experience with a wild sense of freedom after traveling so far from home and across parts of the country I'd never before seen. I also got my first taste of the southern stars. One of the nights was clear, and there beneath Sirius I spotted a twinkling Canopus. That alone put me in heaven.

In college now and working a summer job scooping ice cream in northern Wisconsin, my school friends, Rick and Larry, and I planned a trip to Canada's Quebec Province to see the total eclipse. We took Larry's green Vega for the 1,340-mile drive to Baie-Comeau on the St. Lawrence River and from there another 150 miles north to Manicouagan Crater, one of the oldest and most recognizable impact structures on Earth. I hope I never travel long distances in a Vega again.

We weren't much for meticulous planning. One night in Quebec there was nowhere to lodge, so we pulled over and slept in a farmer's field. The next morning the owner was there bright and early to greet us, but instead of kicking our butts, once he learned of our eclipse plans, invited us to breakfast with the family. I remember yellow sunlight streaming through the tidy home's windows, great food, and lively conversation in both French and English.

We arrived at our "site" somewhere near a dam called Manic-5 and set up camp. During the early afternoon on eclipse day, the sky was just partly cloudy, but as the Moon's shadow approached, clouds drifted in front of the Sun at just the critical time, blocking totality from view. We just drove 1,500 miles for this! How could a few clouds just take it all away?

I recall hiking down a path lit by the invisible corona slapping black flies, which were so thick, they literally chased us out of the forest. We took down our camp in a hurry immediately after the eclipse, threw everything in the car, and sped back down to the coast. I was in such pain from fly bites on the back of my neck and head, I soaked in our hotel room tub, nursing my neck well into the night.

Finally, sweet success! And it only took nine years. I was living in Urbana, Illinois, at the time and drove solo up to Winnipeg Beach, Manitoba, on the southern end of Lake Winnipeg, a jaunt of just over 1,000 miles. En route, I passed through Duluth, Minnesota, and was so struck by the snowy, icy beauty of the place that I ended up moving there some five months later.

The story's more complicated than that, but I'd been considering moving north to escape the sweaty Illinois summers. Seeing Duluth for the first time proved the tipping point. One wonders whether things would have turned out differently had I passed through the city in mid-June with temperatures in the 40s and 30 mph winds blasting off Lake Superior.

Weather uncertainty seasons every eclipse with a certain amount of tension, especially if you've traveled a long distance, so when I woke up in my Winnipeg hotel room on the big day and saw the Sun through the curtains, I stopped holding my breath.

Although Winnipeg lay in the path of totality, I wanted to be closer to the centerline. After a quick breakfast I hopped in my Honda and headed north. My original destination was the town of Gimli, but Winnipeg Beach, a community 75 miles north of Winnipeg and tucked along the shore of Lake Winnipeg, seemed a fine place to stop and park. I walked my 6-inch Edmund reflecting telescope out onto the snow-covered expanse and made quick friends with a group of amateurs from Minnesota.

The cirrus hardly bothered the Sun as the light turned faint on the snow and shadows sharpened. I remember the diamond ring effect, the Moon covering the last beads of sunlight in real time, and striking red prominences poking up along the Moon's limb.

Mercury, Mars, and Venus were strung out on either side of the Sun, so I had this visceral sense of standing on planet Earth looking out across the entire solar system. How incredible that human beings are privy to such a profound sense of place.

The landscape during totality was brighter than expected — I'm sure the snow helped — but I recall my surprise at seeing sunset-early twilight colors all around the horizon. The event stirred a lot of emotions inside me from tinges of fear at the fading light to an irrepressible joy at the onset of totality.

I returned home with a new determination to follow my heart to the North. In September that year I made the move and Duluth's been my home ever since.

My wife, Linda, and I joined a tour group and traveled to La Paz in Baja California, Mexico, to see one of the longest totalities ever — all of 6 minutes 27 seconds from our beachfront location. But as many eclipse chasers will confide, every totality feels like it lasts under a minute. When you're watching the eclipse on Monday, remember you're on UT — umbra time — when both the clock and heart seem to tick at an accelerated rate.

This eclipse coincided with the pins and needles experience of waiting for the Colombia adoption referral for our first daughter. In a referral, the couple receives photos and other information about the child and decides to proceed with the legal side of the adoption process. Every day, we'd check at the hotel front desk for a call from home with the news that the "packet" had arrived.

The Sun stood high in a cloudless, blue sky during the eclipse as I set up a small telescope and camera on a blanket on the beach. My wife relaxed in a reclining chair, welder's glass at the ready as tiny crescent Suns spilled from gaps in the palm fronds onto the sand below. At this eclipse, the eeriness of the light caught my fancy more than at any other. A bizarre combination of sunshine and darkness, it makes you feel like you're slowly losing your sight. Perhaps more than at any other time, that final minute before totality intimately connects us to our most distant ancestors, who likely feared for the worst. Get ready for chills up and down your spine.

My best memory of the eclipse was viewing the corona through binoculars that gently bounced to the rhythm of my pumping heart. It looked alive! I couldn't believe the detail, the silkiness of the thread-like streamers. Few photos show this well, but wait till you see this silvery diadem for yourself — you'll never forget it. I know this sounds impossible, but I could have sworn the streamers were moving like glowing tentacles quivering in ultra-slow motion. Has anyone else experienced this or was it just my overactive brain?

The temperature dropped at least 10° in the mid-day twilight, lending the six-plus minutes of totality a relaxing, after-dinner feel that was further enhanced by the oranges and pinks around the horizon where the Sun was only partially (albeit deeply) eclipsed. Once again, powerful emotions took hold. I couldn't help but associate the eclipse with the beginning of my life as a new dad. Like the Moon's shadow, that life was swiftly approaching, and as any parent knows, raising a child becomes its own totality.

The final phase of our eclipse adventure took place on the return trip, upon our arrival in Los Angeles. We made a call from airport back to Minnesota and learned that the referral had just arrived. My wife's father would meet us at the airport with a picture of and details about our soon-to-be daughter.

"It is the only natural event that I have experienced that felt supernatural." That's how my friend Greg Furtman described the 1998 eclipse we saw from Renaissance Beach on the island of Aruba.

But moments before totality, we both experienced another emotion: terror. Cooling temperatures brought on with the approach of totality caused masses of clouds to materialize in the blue sky only minutes before the total eclipse. Suddenly, it became apparent that we might miss the best part of the show. Luckily, the clouds only partially eclipsed the totally-eclipsed Sun — we still got great views of the prominences and corona in the sucker holes.

Up to this time, I'd viewed solar eclipses — two totals and two annulars — from a frozen lake, a hotel beach, a science museum, and a cemetery, but this was my first experience at an "adult" beach. Let's just say that clothing was an option here. Eyes may have wandered during the partial eclipse, but all were transfixed on what was happening overhead for 3 minutes and 45 seconds.

If all goes well, this will be my fourth totality, and I'm looking forward to every second of it. This one will complete a great circle in my life because both of our adopted daughters will join my wife and I in the Nebraska hinterlands. Cosmic events touch our lives in many ways. Every total eclipse is a personal journey. I hope this one will reverberate through your life in ways you never expected.