Defying censors and partisans, Egyptian director Mohamed Diab has made a riveting film about the Arab Spring 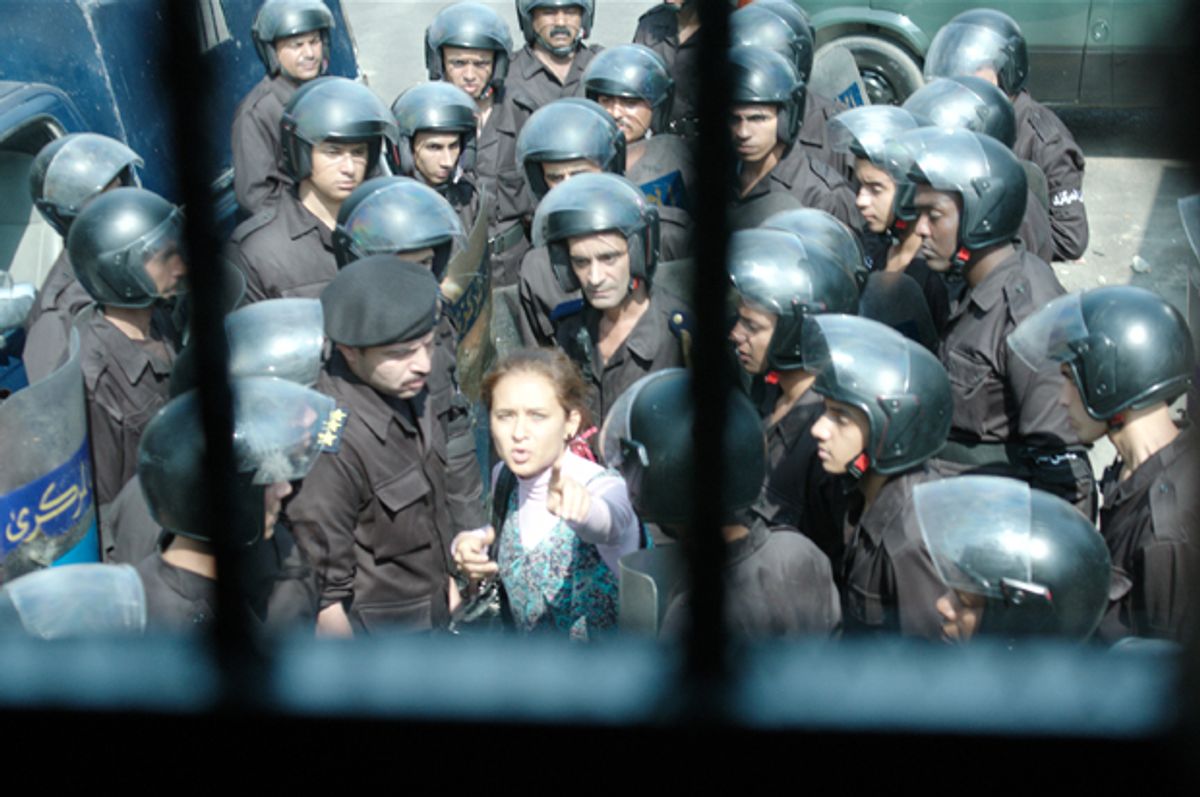 Director and co-writer Mohamed Diab’s riveting film “Clash” is set entirely in the back of an eight-square-meter Egyptian police van. Unfolding over the course of a single day in 2013, after Mohamed Morsi of the Muslim Brotherhood (MB) party was overthrown, the film has military supporters, members of the MB, as well as reporters, activists and ordinary citizens imprisoned in the claustrophobic space.

Diab’s characters represent a cross-section of Egyptian society, and their similarities and differences are magnified in the crucible that is the paddy wagon. This powerful drama examines religious, political, ideological, familial and gender differences. There are striking scenes of the characters being sprayed by a fire hose as well as more tender moments in which the prisoners pass around a bottle of water. These episodes show both the individual and collective, providing a greater emotional impact. As dramas big and small unfold in the noisy, crowded van, “Clash” is relentless, culminating in an intense finale.

“Clash” was the opening selection for the Un Certain Regard section of the 2016 Cannes Film Festival, and, surprisingly — given its political angle — Egypt’s official entry in last year’s Best Foreign Language Film Oscar race. Via Skype from Egypt, Diab talked about making “Clash,” and the controversies that arose around his rewarding film.

What made you want to shoot the entire film from the confines of an eight-square-meter police paddy wagon?

Two reasons. I wanted the audience to feel the feelings of the people being trapped inside. It’s like a ride in an amusement park. If you go see the film, you will take that ride. It’s a different kind of experience. The viewer feels they are part of it.

I also wanted people who are completely different, especially Egyptians, to be forced into a very tight place and have to revise their ideologies. Are they going to coexist or not? I’m asking the audience the same thing, and I’m asking all the polarized people in Egypt and around the world to look closer and see the humanity.

Rather than hold one continuous fixed shot inside the van, the camera zooms and pans, which creates emotion. You shoot through windows and the door to provide a sense of space. Can you talk about your approach to filming?

This was the intention; I wanted the audience to have the camera as their eyes. There are 26 people in the van, and you see things that pass by in close-up and from the camera movements. My only direction to the DP was to capture everything as if it was real — as if the camera was someone’s eyes. I love when the camera makes a mistake, like someone tripped. That felt real, and I wanted it in the film.

Likewise, the film is very, very loud, with characters shouting for almost the entire 98 minutes. It adds to the effective sensation of “you are there.” Can you discuss that aspect of “Clash”?

It’s toned down for an Egyptian film, and Middle Eastern tastes. If two people from Middle East are talking, it will be louder. But when you have nearly 30 people in a tiny space of eight square meters on the brink of killing each other, and things keep provoking them, it’s going to be loud. I dropped it down to a tone that I felt was real. If one character reaches a conclusion, 13 others will doubt him. Anything rational is covered by hysteria. I almost called the film “Hysteria.”

The van is made of tin, which echoes. It doubles the sound when you hit it. Realistically, it will make things loud. I freaked out when I was inside the van and folks were outside hitting it [with rocks]. The banging on the tin when you’re inside is like a torture technique!

Have you ever participated in protests, or been arrested? If so, what were the circumstances?

I was part of the Egyptian revolution since day one. On the first day of revolution, I was in a protest and attacked by a policeman who pointed a gun at me and chased me down. I was lucky; I talked him into letting me go. But my fear wasn’t about being killed; it was about being in that van. I’m claustrophobic. I made this film to overcome my fear, but it didn’t work. The fear of being inside that car stayed with me.

What went into creating the film’s major and minor dramatic conflicts?

Writing the film was a big challenge. You have nearly 30 people in the van, and they have to be memorable. The Muslim Brotherhood characters have to have their own personality. You have to create the characters in a way that leaves a mark. After writing the Muslim Brotherhood characters, we gave them “What If’s” — what is going to change in the dynamics in the car? After getting feedback from rehearsals, we examined every option and character, so we could pick and choose the best moments. Like one guy has a memory of his dog, rather than his brother, which made him the most sympathetic character in the whole van.

What can you say about working with the actors, and what you put them through during shooting?

I wanted actors who believed in the project and wanted to do the work. If they didn’t agree with the ideology of the film, they rejected it. They had to commit to a whole year to do it. They sacrificed and risked their lives in shooting it. We’re not professional when it comes to stunts. I had two stunt coordinators. We had real rocks thrown and some people got hit. They came back after going to the hospital even though I gave them the day off.

Sometimes I changed the actors and their roles. It was collaborative. It was a big camp. We had kind people playing aggressive and vice versa. I wanted to soften the tension. The two women in the film are different from preconceived notions of Arab women. But they are very much like women in the Arab world.

What decision did you make about the violence in the film? It’s very visceral.

I was depicting exactly what happened living through the chaos. America is getting a taste of it right now, with Charlottesville. That chaos is very similar. I wanted to depict the truth, and show how brutal people can be. The people inside the car are as brutal as the people outside. When normal people are outside during the chaos, they can be driven to insanity. The film is trying to show how a normal person can turn into a monster and how a monster can become human again.

What did it mean for “Clash” to represent Egypt in the Oscars’ Best Foreign Language Film category?

Imagine making a film during World War II, and humanizing everyone: the Germans, the Brits and the Americans. That’s what I was doing making the film. Everyone thought I was siding with the other, and humanizing the enemy. Knowing that, we made the film without anyone knowing what we were doing. The censorship in Egypt meant the film could have been edited, so we had to show it at a film fest to give it protection; when people see the film in its entirety, it makes it hard to edit it. We got the opening slot in the Un Certain Regard program at Cannes. The news media said I was a spy, a terrorist, and was accused of being part of a ring.

Can you discuss the controversy you faced?

My distributor said, “Don’t distribute this film in Egypt or you’ll never work again.” Behind the scenes, there was pressure, and every cinema in Egypt was scared. If you ban the film, it will be an international scandal. If no one shows it, it’s no one’s fault, and no one will criticize anyone or embarrass anyone. I wanted it to get a good release, and I posted stuff on Facebook that Tom Hanks loved the film. He sent me a letter, and I posted his letter, and people thought I fabricated it. Some folks bombarded his social media about this. Egyptian people thought he was in on the conspiracy. It became a war. It was like what’s inside the car. I asked for people’s support, and it was a landslide. “Clash” became a huge release and the number-one film in Egypt. The irony is that people who saw it were pissed off because it wasn’t against the government. They thought it was propaganda. The Minister of Culture went on TV in support of it to counter the argument that the government was fighting the film. And a week later, when they had to pick the Egyptian [Oscar entry], it was a secret ballot. But the head of censorship voted for it and showed everyone he voted for it.