The world according to bikers: A Sturgis Motorcycle Rally report on the state of the union

400,000 Harley riders in South Dakota meet up with one Salon reporter to talk politics. A recipe for mistrust? 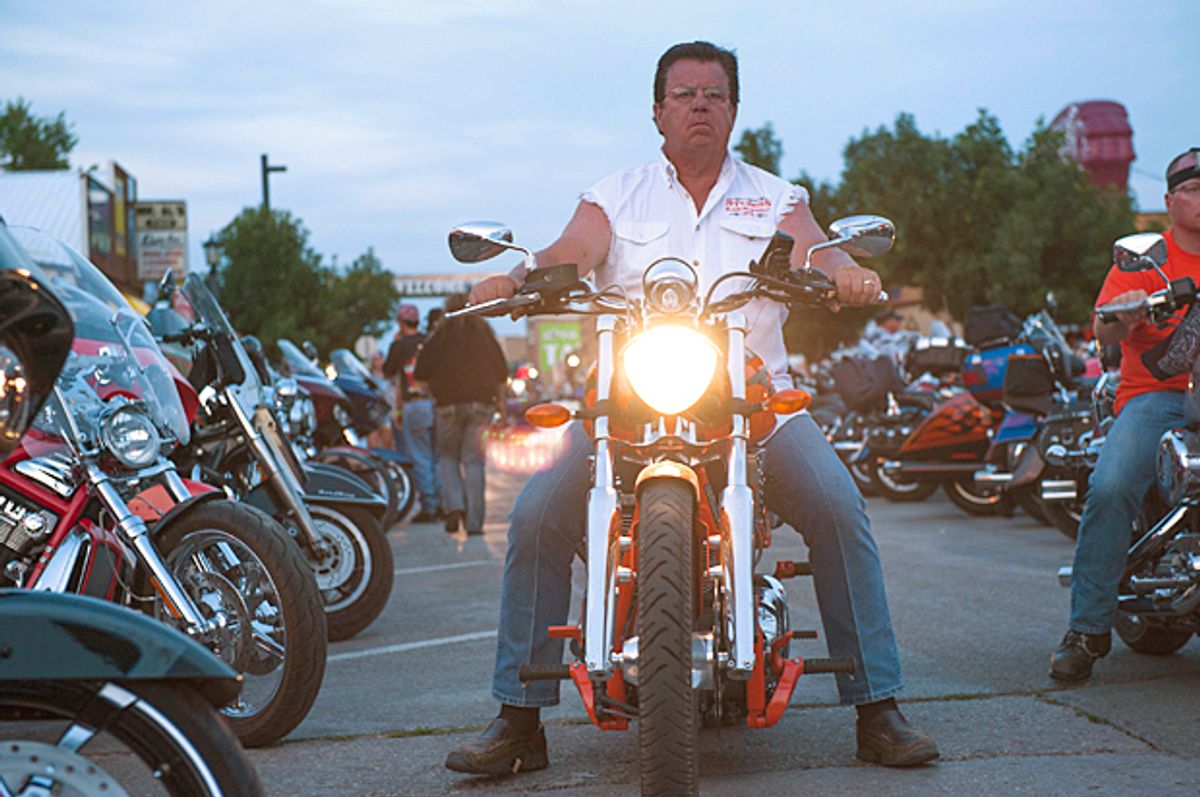 A biker rides during the 75th annual Sturgis Motorcycle Rally. This year marks the 77th anniversary of the rally. (Getty/Andrew Cullen)
--

Every August, in the city of Sturgis, South Dakota (pop. 7,000) — 30 miles east of the Wyoming border and just north of Black Hills National Forest — half a million motorcyclists descend upon the quiet hillside town for the Sturgis Motorcycle Rally. Bedecked in leather and astride boisterous Harley Davidsons, riders swarm the city streets for 10 days of booze-filled revelry, flat track races, twisting rides through the Black Hills and sales of every imaginable motorcycle accessory along Main Street.

T-shirts hanging from shop doors feature Trump, seated on a motorbike outside the White House, throttling the engine to throw Hillary Clinton off the back seat, the words “If you can see this, the bitch fell off,” in thick red letters across his back.

Country, rock and rap music pump from bars into the dry plains air. Topless, painted women saunter down sidewalks, men ogling and turning as they pass for long, lustful stares. Booze pours down the mouths of riders as quick as curses pour out. Freedom, one might say, saturates the scene.

In search of the biker’s take on the state of America and the world, I meandered through downtown Sturgis last weekend on the final Saturday of the rally, interviewing anyone who was willing. I wanted to get a sense of the politics of the Harley Davidson set. During the primary, “Bikers for Trump” were a big and vocal constituency for now-President Trump. Did these bikers still feel fondly toward the administration? And what drove their politics?

As I interviewed these bikers, a theme unveiled itself before the night turned dark: mistrust. Not in me as a reporter, but in the government, national media outlets, politicians and other’s accounts of the “truth.” Here were some of the most enlightening responses.

What do you think of when you hear the word freedom?

“You should be able to do whatever you want to do according to the rules, without hurting nobody.”

—Oscar Torres, in from Chicago for his first Sturgis rally

“President Trump. Trump all the way.”

—Mike Toov, in from Minnesota for his third rally

“What comes to my mind is being safe. The first thing I think of is safety as far as our nation and our allies.”

—Scott Buck, in from Indiana for his fourth rally

“Having the right to do what I want to do. Because of the work of others we have the freedom to do what we want.”

—Bill Coady, in from Washington, D.C., for his third rally

What are your thoughts on immigration?

“If you’re illegal and you have a record, a felony, you probably should go away. If you’ve been a citizen without a being a citizen, you don’t have a felony, you’ve worked here, why not (be granted citizenship).”

—Mike Valles, in from Colorado for his fifth rally

“That’s a tricky situation. I think that if you’ve been in the United States for a long period of time you should be grandfathered in instead of going through all the procedures.”

“This is a free world, man, this is a free country. All [Trump]’s trying to do is keep the undesirables out, and a lot of people do not understand that and for why, that’s another smoke screen that they’re [media and liberals] throwing up at the American public. I think this administration has good intentions. If it takes a wall to be built to keep these people that want to destroy us out of this country, then let’s build two walls.”

“If you come into this country illegally and you work hard, I got no problem with people working hard in the country. But do it right. If they come across and they’re illegal I don’t care if they’re bad ones or good people. If they came across illegal, they’re illegal. Make them do it by the law."

What do you think of the possibility of Russia meddling in the election?

“It’s like when we were in the service, we shouldn’t have been in countries where we always went to.”

—Jerome Highhorse, in from El Paso for his sixth rally. Born on the nearby Pine Ridge Reservation, Highhorse is a Vietnam War veteran.

—Sean Meehan, in from Minneapolis for his 20th rally

“I’m not really happy about that situation. I feel like uneasy about a lot of things.”

—Oscar Torres. Torres mentioned he has family in the military.

“For heaven’s sake, if they meddled in it a whole lot of sparks would be flying and they’re not. It’s just something that [liberals] fabricated, I really truly believe, to just try to heal their wound.”

“I don’t care. Because if it were Hillary in charge it’d be the same crap.”

“The news media is getting it all messed up. The news media is promoting it. They’re tying to get people focused on that and that way they don’t focus on Trump and the good things he’s doing.”

What do you think of the North Korean nuclear situation?

“My opinion of North Korea is get the hell away from them. Leave them alone. The more we provoke him, the more he wants to do. He’s just doing this stuff to show us that he’s something. If we ignore him he’ll go away.”

“Be very careful with what they do. You don’t want to push the button.”

“The world will take care of North Korea either way. We won't be the only ones doing it.”

“We should very well be concerned about that. We need to do whatever it takes to back down our aggressors. Whatever that takes. Short of a major war, we need to take precaution with them people.”

Who did you vote for, and was that vote more for the person or against their opponent?

“For [Libertarian candidate Gary] Johnson, because I didn’t feel too good about the gentleman that’s in office right now.”

“I voted for Trump, because I hated Hillary worse than I do Donald,” said Valles. “I don’t think our government is working well together, so I thought maybe he would shake things up a little bit because I know nobody likes him.”

When asked what he thought of Trump’s first seven months in office, Valles and a nearby friend laughed.

“I don’t think our vote really matters. We knew where our votes were going to go. That’s sad.”

—Highhorse, who voted for Clinton

“All I ever do is hear about politics. All the senators and the Congress, they’re all playing the same game. They tell you whatever they want to tell you to get in and then once they get in they do what they all got to do as a group and they’re not working together. So get them out and get a change. Vote the old people out and get a change.”

—Coady, who called his vote for Trump more of a vote “ against Clinton”

“I think it’s just great,” Toov said of the Trump presidency. “It’s just sad that the media is making it look like he doesn’t do nothing. It’s a bad deal.”

When asked if he trusts the government or the media, Toov laughed. “No,” he said bluntly, before asking who I worked for.

Though he remains wary of Trump, Scott voted for him because he feared what a Clinton presidency would do to his freedom.

“You got to reflect back on the last two or three administrations,” he said. “Have they kept promises? No. All they do is just let you hear what you want to hear and then they let us down.”

“I’m not a huge fan of the guy,” he continued. “But what I’m seeing is we’re better off going this route than digging a deeper hole because that woman and that administration was going to give our freedom and liberty up. If what happened didn’t happen, our world would be changing quicker than you think. Something had to change and to be honest with you, we couldn’t let her in there.”

When asked if he trusted the federal government, Scott expressed a suspicion of any government’s motives.

“I’m anti-government,” he said. “I believe in small government. I believe that they have their own hidden agenda and whatever that may be, they do what they need to do to reach their hidden agenda.”

He disagreed with his vote being characterized as a middle finger to the government, though.

“It wasn’t a complete fuck you to the system,” he said. “It was, ‘We need to make some changes’ and that was the only avenue I could see to bring that on.”