Welfare as we know it now: 6 questions answered 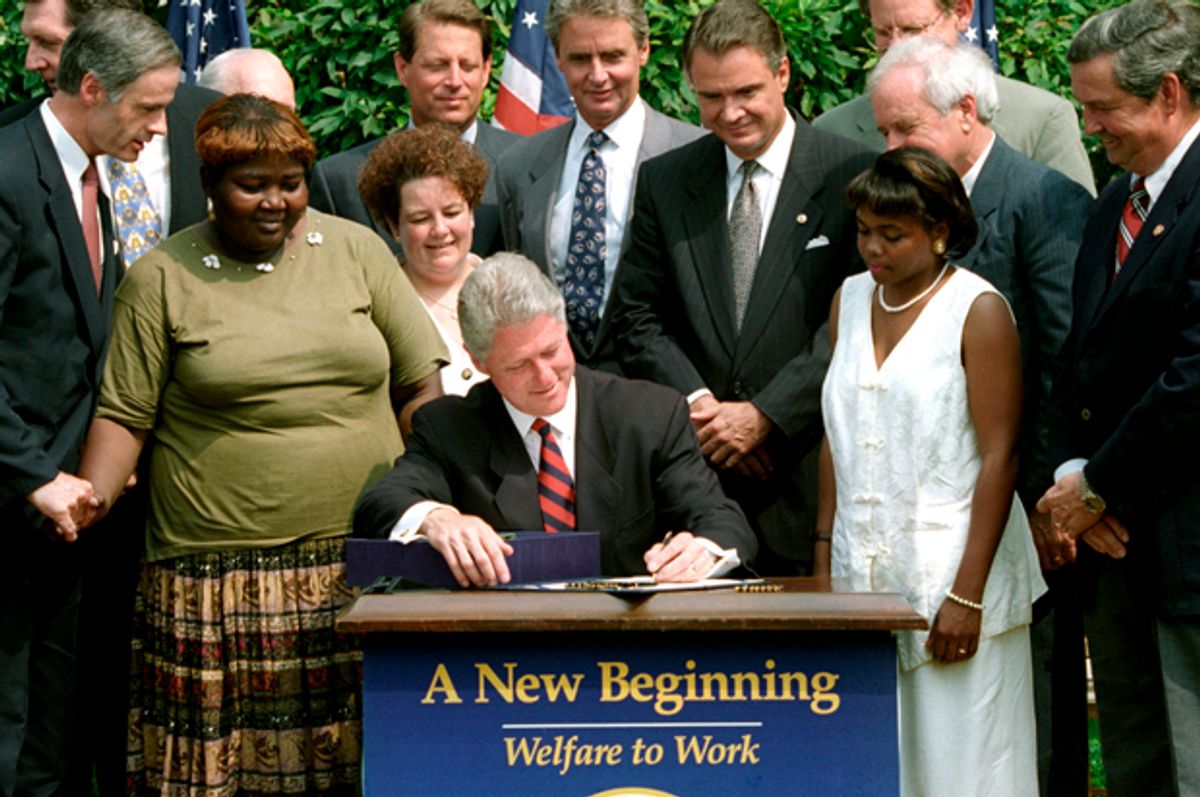 President Donald Trump’s proposed budget would slice US$21.7 billion over a decade, or 13.1 percent, from Temporary Assistance for Needy Families (TANF) — what’s left of basic welfare for families facing economic hardship. To justify this cut and an across-the-board reduction in antipoverty spending, he argued, “We must reform our welfare system so that it does not discourage able-bodied adults from working, which takes away scarce resources from those in real need.”

TANF provides cash assistance and other services to children and their parents or guardians who can work and are extremely poor. States, sometimes through local governments, administer the program and help fund it.

Fulfilling Clinton’s campaign promise to “end welfare as we know it,” the law tied time limits and other, sometimes intrusive, mandates to cash grants. Among other changes, it converted the federal program into a block grant model, letting states use these dollars how they wanted. It converted this antipoverty program into aid contingent on efforts to enter or reenter the workforce through new job requirements. In 2012, the most recent year for which comprehensive data are available, more than 42 percent of TANF families included an employed household member.

How many Americans get TANF benefits?

The 1.5 million American families who obtained TANF benefits in a typical month in 2015 represent roughly 23 percent of those experiencing poverty. In contrast, AFDC, the precursor program, supported 4.7 million families in 1995 — 76 percent of the nation’s poor families.

Who gets TANF benefits?

More than three out of four of the people who get these benefits are children. For a growing share of TANF “families” — nearly half in 2015 — the only beneficiaries are minors.

Most of these children who are the only people in a household getting benefits either reside with guardians or have parents who are aren’t eligible themselves. Ineligible parents who live in poverty might be immigrants, people who receive disability-related assistance or adults who would qualify if they hadn’t broken TANF rules, such as failing to fully comply with a work requirement or submit required paperwork.

In those cases, families keep receiving the children’s part of the grant. This reflects a reluctance by policymakers to punish kids for their parents’ status or behavior.

How long do people get these benefits?

Most TANF recipients get benefits for short periods of time. From 2008 to 2011, as the Great Recession ended, most of them were out of the program within four months or less. The vast majority of Americans who got TANF benefits from 1999 to 2008 received it for no more than two of those years, according to the Department of Health and Human Services.

The federal government cuts off TANF benefits for families with an adult recipient after a total of 60 months. States may set their own ceiling below five years if they want or make an exception to this lifetime limit for up to 20 percent of their TANF cases, based on exceptional hardship. They can also use their own money to continue cash benefits for families that hit that five-year quota, which applies to adults but not children.

How does the program vary across the country?

TANF cash grants averaged $442 per family as of July 2015. The maximum monthly grant available to households with one adult and two children ranged from a low of $170 in Mississippi to a maximum of $923 in Alaska.

What does TANF fund?

After two decades under the block grant model that gives states discretion over how to spend TANF dollars, cash grants typically consume only a small share of this money.

States may spend federal TANF funds on other activities serving its official purposes, as well as such things as foster care, juvenile justice and what the government calls “emergency assistance” — goods or services that help meet children’s basic needs amid short-term hardships.

States spent on average about a quarter of federal TANF funds on “basic assistance” — mostly as cash grants — in 2015 and 16 percent on child care. Another 10 percent funded “work, education and training activities,” including subsidies to employers that hire people enrolled in the program and services designed to help them get jobs. “Work supports,” benefits that cover expenses such as transportation to job interviews, uniforms and occupational licensing, averaged 2.5 percent of TANF funds.

The remaining fifth of federal TANF dollars funded an array of efforts to promote two-parent families, reduce domestic violence and topple what the government says are “barriers” to work and self-sufficiency, like substance abuse counseling. Not all of this money helps the poor. Michigan spends some of its federal welfare dollars, for example, on college scholarships for high-income families.

Despite not covering most U.S. families living in poverty, the states ended the year with $1.4 billion in committed but unspent federal TANF funds, plus $2.3 billion more that they are saving for future years.