"Game of Thrones" recap: "Beyond the Wall," an adventure into thin air 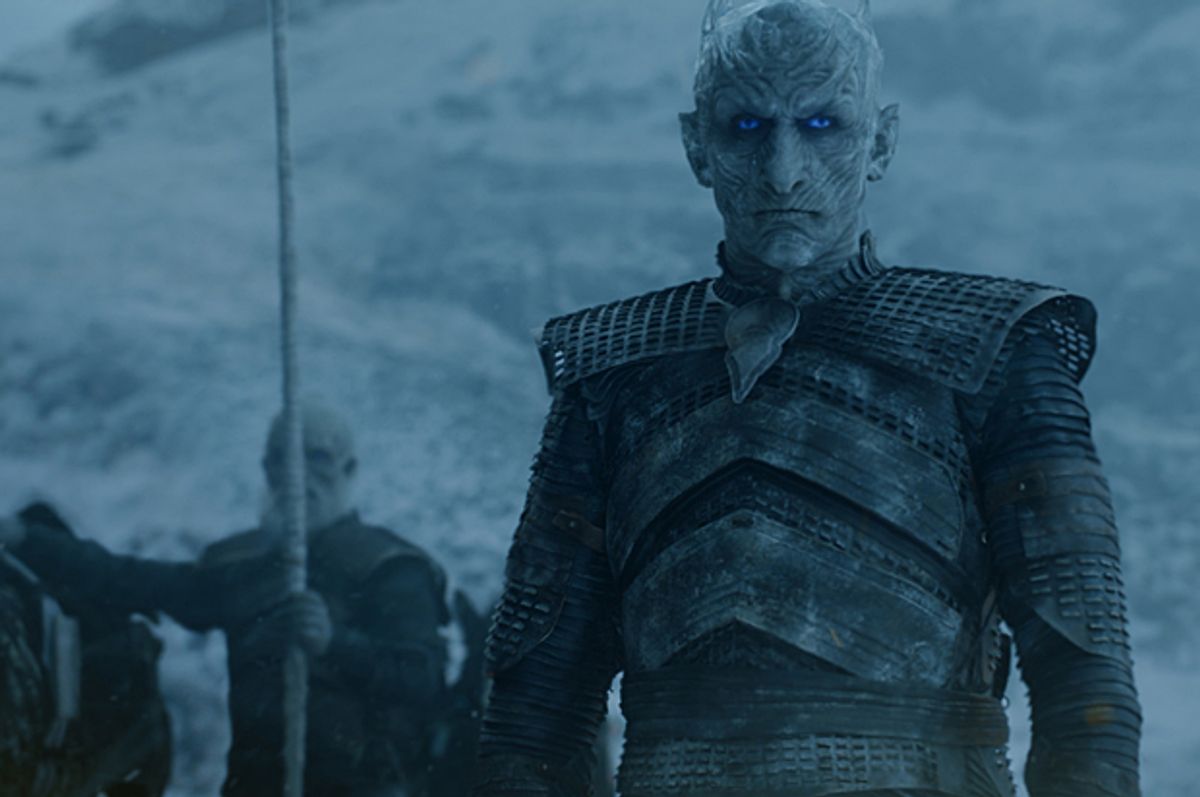 Death, be not stupid. Especially at this point in "Game of Thrones." If we have to lose a character we've grown attached to, human or otherwise, it had better be for a very good reason.

Fortunately, the deaths in “Beyond the Wall” weren't big enough to protest too loudly. One, in fact, produced an outcome that few if any viewers would have predicted, which would be more satisfying if it didn't result from the “let’s fetch a sample for Cersei” scheme initially floated in "Eastwatch." It was a terrible plan and an uncharacteristically sophomoric suggestion from one of the series’ wisest figures. Yet this was the coal David Weiss and D.B. Benioff tossed into the furnace, fueling the narrative train sputtering through “Beyond the Wall,” season 7’s penultimate episode.

On some level, the producers had to know they were running with a turkey in serpent's clothing, even hinting at their awareness during Daenerys’ (Emilia Clarke) outburst to Tyrion (Peter Dinklage). That line about would-be heroes competing to do the stupidest, bravest thing was more or less the logline for the episode.

Let’s do some math: To secure one animated skeleton, the unwashed ten or 11 — a group that includes Jon, Tormund Giantsbane (Kristofer Hivju), Ser Jorah Mormont (Iain Glen), Beric Dondarrion (Richard Dormer), Sandor Clegane (Rory McCann), Gendry, the long-distance runner (Joe Dempsie) and Thoros of Myr (Paul Kaye) and some nameless direbear food — lose most of their number. Later, when all seems lost, Daenerys zips in steering her three dragons with the timing of Gandalf from "The Lord of the Rings," and the speed of a Concorde.

It almost looks as if Jon is about to buy it at one point, until Uncle Benjen (Joseph Mawle) pops in with one final Stark save. Remember, all of this is the price of nabbing one dead guy in order to change the mind of Cersei Lannister (Lena Headey) — who, by the way, has had a giant frankenknight on her payroll since the end of her walk of shame.

But before that, we lose one of Daenerys' dragons, Viserion. Down he goes, felled by the Night King's javelin. That was upsetting.

In each season of “Game of Thrones,” the episode prior to the finale is a visual feast, dizzy with complex combat choreography, explosions and adrenaline that marks a shift in Westeros’ balance of power. This season already gave viewers one such violent delight in “The Spoils of War” and the attack on the Lannister loot train, the filming of which required technical wizardry beyond the likes of anything the series has previously served.

Expecting “Beyond the Wall” to top or even meet that bar feels greedy, in retrospect, and director Alan Taylor had a difficult task in carving a spectacle out of a battlefield made of ice and blizzards. If “Beyond the Wall” fell short of visually stunning us on the scale of a “Battle of the Bastards” or a “Blackwater,” or earning its edge-of-the-seat anxiety in a thoughtful way, the main fault isn’t with Taylor but the storyline itself.

The “let’s go snatch a dead guy” gambit is worthy of a homemade Dungeons & Dragons module, not a premium cable series. And its emotional manipulation was on par with an episode of “24,” in that the viewer knew from the beginning that a character or two wasn’t going to make it back.

Several beloved characters nearly bit it, actually, and gratuitously so. Most of the guys who died never were properly introduced; I feel particularly terrible for the Wildling Red Shirt #1, devoured by a huge zombie bear.  But his killing didn't provoke me anywhere as much as Tormund's near-death experience. His end would have been a knife to the heart, especially now that we know he dreams of making monstrous babies with Brienne of Tarth.

For the most part, “Game of Thrones” has been a series where the deaths that pained us most were well-earned. Even Ned Stark, whose demise is a byproduct of his stupidity, dies because he unwisely believes that members of nobility were bound by honor. Ned's execution is an establishing lesson to show viewers that integrity and virtue mean nothing in this universe.  So while it’s a relief that none of the top tier characters died during the harebrained mission of “Beyond the Wall,” it’s an annoyance that Ser Jorah, Gendry, the Hound and Tormund and even Dany's dragons were threatened by such an unworthy scenario in the first place.

But it goes with the tenor of a season in which the audience has been asked to believe time and again that characters who have done impossible things would refuse to believe other characters who also have done impossible things.  If Daenerys hatched three dragons, but cannot conceive of an army of White Walkers, why wouldn’t Cersei refuse to believe her own brother Jaime (Nikolaj Coster-Waldau) when he conveys reports of an army of dead stampeding towards the Wall? She has one massive animated corpse standing a few feet from her at all times, but thousands of them? Highly unlikely!

Though most of “Beyond the Wall” hinges upon completely avoidable circumstances, it also raises the stakes very quickly. At this point in the series, that’s a necessity. Beric and Jon have lost Thoros of Myr, the companion who can bring them back to life, and Benjen. Worse, Team Living is down a dragon and, in a shocking coda to the crime, the Night King added Daenerys' fallen child to his expanding menagerie. At least we know who will be riding one of those other dragons, right? (Also, does a zombie dragon breath a freezing breath or fire?)

The hour and 15-minute "Beyond the Wall" did strike some satisfactory emotional notes, such as when Daenerys nearly admits she has the tingles for Jon (seeing the men who love her teeter on the brink of death seems to be her aphrodisiac of choice), right after he acknowledges her as his queen (facing down thousands of zombies has a way of shattering a man’s pride). Turns out, Cersei wasn’t the ruler that this suicide mission needed to convince. Dany didn’t have any real skin in the game before. Now she does. (And she doesn’t want to be called Dany. Noted.)

But the best scenes in “Beyond the Wall” take place away from the icy no-man’s land, within the dim halls of Winterfell. The clash of absolutes versus shades of gray is shaping up to be far more vicious than the rusted blades of an angry skeleton, and nestled within these foggy areas of uncertainty Sansa Stark (Sophie Turner) and Arya (Maisie Williams) may find some version of the truth that absolves them of all past misdeeds. But in this episode, Littlefinger (Aidan Gillen) does his best to push Sansa closer to turning on Arya, as Arya grows more comfortable in revealing her sociopathic tendencies. Sansa finds Arya's faces. Arya doesn't care that she has.

Here, at least, the narrative circles back to examine the ideals that have defined and hindered the Starks, specifically honor and loyalty. Sansa and Arya now realize the rules that would constrain them beg to be broken. Arya intimates this as she recalls a memory of their father watching her sneak in some archery practice and applauding her when she finally hit a bullseye: “I knew what I was doing was against the rules, but he was smiling. So I knew it wasn’t wrong. The rules were wrong. I was doing what I was meant to be doing and he knew it.”

Arya has spent recent episodes punishing Sansa for being prideful and covetous. Now, with Littlefinger’s prodding, she wonders about Sansa’s loyalty to their family. This sisterly conflict seems so pointed and over-the-top that the show is as much for Littlefinger as it is for us. The fun here is figuring out who’s really pulling the strings and wondering if the series is cruel enough to have Arya waltz into King’s Landing one day, wearing her sister’s face.

Season 7 raises debates as to whether Arya is a sociopath or an inspiration – or both, depending on how a person feels about sociopaths serving the cause of justice. Arya also keeps Sansa and her apologists honest; answering Sansa’s reminder that she was just a child when she wrote the letter characterizing her father as a traitor, Arya cruelly and correctly points out that if she shares the missive with the honor-obsessed Northern lords, her excuses won’t matter much. “What will little Lyanna Mormont say?” Arya says, referring to the stalwart, outspoken Lady of Bear Island. “She’s younger than you were when you wrote it.” Oof. Then she arms her sister with a Valyrian blade — interesting.

Gray is such an uncertain color, and the Starks really do wear it well. But their shade of it needs to come out on top in this morality battle if the people of Westeros are going to survive. Heroes do stupid things and they die, one character observes. Another points out that fear makes power brittle. Beric Dondarrion poetically reminds us that “death is the enemy — the first enemy, and the last.”

We saw another enemy “Beyond the Wall,” and it may be just as terrifying. It’s known as a lazy conflict scenario, and its traps are deadly. Hopefully the producers will have defeated it in time for the seventh season finale.