We looked at Trump's Twitter interactions for more than a year. A lot of them are suspicious.

Accounts that Trump retweeted or quoted are no longer active, raising questions about his social media strategy 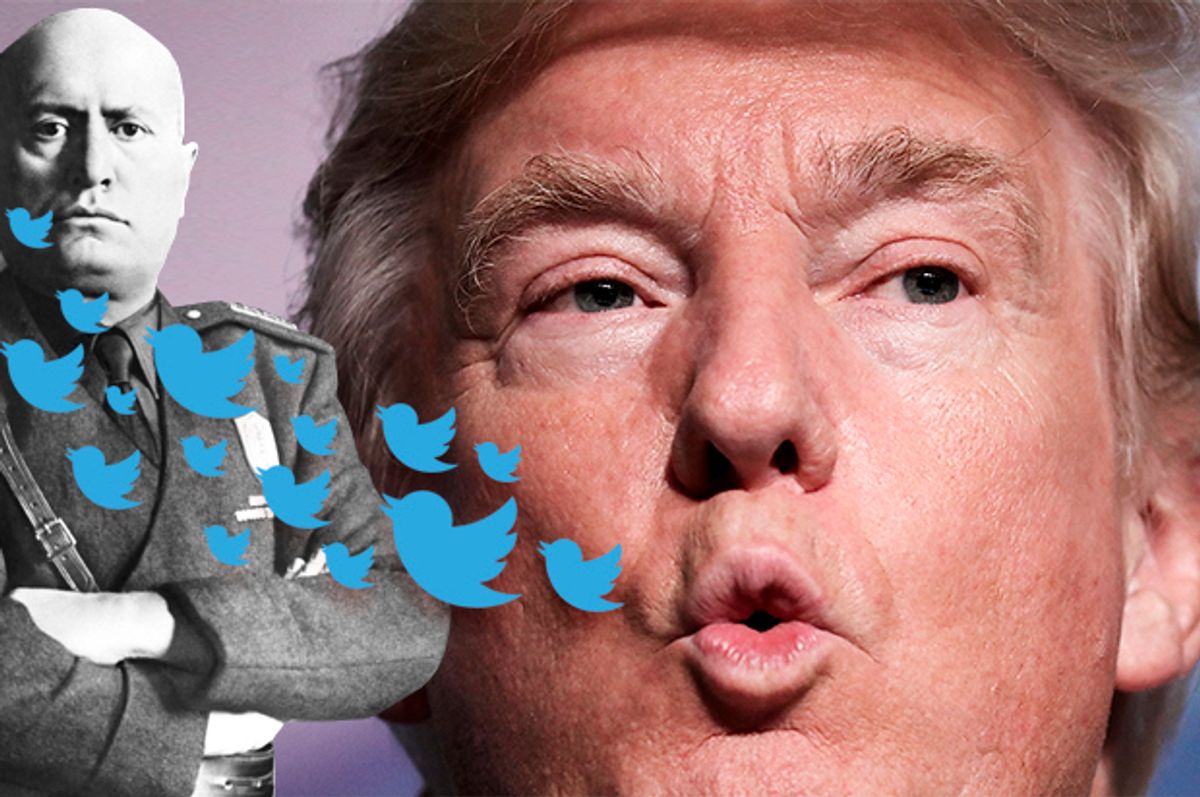 President Donald Trump tweets . . . a lot. But along with his usual flurry of tweets attacking the media, lamenting fake news, or criticizing practically anyone who disagrees with him, Trump has another Twitter habit — quoting his supposed supporters' tweets. A look at over a year of Trump’s retweets, quote tweets, and tweets in which he quoted another Twitter handle has left a lot of questions.

Using the Trump Twitter Archive, Media Matters audited the president’s Twitter handle, @RealDonaldTrump, between April 1, 2016, and July 31, 2017, focusing on retweets, quote tweets, and tweets where @RealDonaldTrump quoted another Twitter handle. We used that list to identify unverified accounts that he quoted or retweeted, which we then checked for the original tweet and suspicious or bot-like activity. If an account seemed suspicious (for example, it posted an unrealistic number of tweets or exclusively pro-Trump messages), we examined its tweeting habits during the weekend of the second presidential debate (October 6 to 10, 2016). Finally, if an account seemed like a bot, we reviewed its tweeting habits between August 2015 and January 2016.

Factors used to identify suspicious behavior included the date the handle was created; the number of tweets sent; the general frequency of tweets and use of hashtags and images; the content and frequency of tweets the weekend of the second debate; and what the account tweeted before the October 2015 primary season. Here’s what we found:

1. Trump retweeted and thanked a woman named Nicole Mincey over the weekend of August 5, 2017, as was widely reported by numerous outlets. Mincey was suspected to be a bot, but was later identified by BuzzFeed and others as a real Trump supporter who was using her page to sell merchandise. It was odd for Trump to simply retweet an unknown account because, based on Media Matters’ findings, Trump typically retweets only verified accounts, such as Fox & Friends’ Twitter account or those of his staffers and family members.

However, Trump frequently does quote tweets from unverified accounts (not using the Twitter “quote tweet” function but literally quoting a tweet). These quote tweets have been called out in the past for featuring white supremacists, and it appears that he also quotes tweets with some frequency from accounts that appear to be either fake accounts or bots.

2. At least 12 of the Twitter handles that Trump quoted in tweets have had their accounts suspended, and at least 16 additional handles have been deactivated. For example, on May 15, 2016, Trump quoted a tweet from the handle @TakingIt_Back:

"@TakingIt_Back: @nytimes keep shining....the ppl will not let the media dim your light...we no longer believe them! #Trump2016" Thanks.

However, when one tries to go to the page for @TakingIt_Back now, it redirects to an "Account Suspended" page. This is true for Trump's quoted tweets of @Gengm7, @patrioticpepe, @EyeCandyTMGayle, and @tweak626 as well as others.

3. On at least six occasions, Trump retweeted tweets from accounts that have only one or two tweets on their page -- and currently have largely inactive profiles.

While we were unable to locate the original tweets from these accounts, they are still active. For example, on August 29, 2016, Trump quoted a tweet from @RhondaR:

"@RhondaR: Thank-You Clarence Henderson for telling @cnn you know racism & it's not DonaldTrump https://t.co/fSBPxZU8Gu via @BreitbartNews"

When one goes to @rhondar's page now, this is what they find:

Make up to $40/hr working from home! http://t.co/VIPIwBzD

Similar account activity can also be seen on the pages of users Trump quoted in these tweets.

4. Trump has quoted tweets from the handles of at least two suspected bots, one of which is the well-known, now-suspended @PatrioticPepe. The other handle, @Don_Vito_08, has been described as “a partly automated pro-Trump cyborg.” @Don_Vito_08 was created soon after Trump announced he was going to run for president; the account began aggressively tweeting pro-Trump memes in December 2015 and anti-Clinton memes after the presidential primaries. The account has over 33,000 followers and claims in its Twitter bio that it was retweeted three times by Trump.

5. Over 20 original tweets that Trump quoted on Twitter could no longer be found.