Lessons from Dick Gregory: Always tackle the elephants in the room 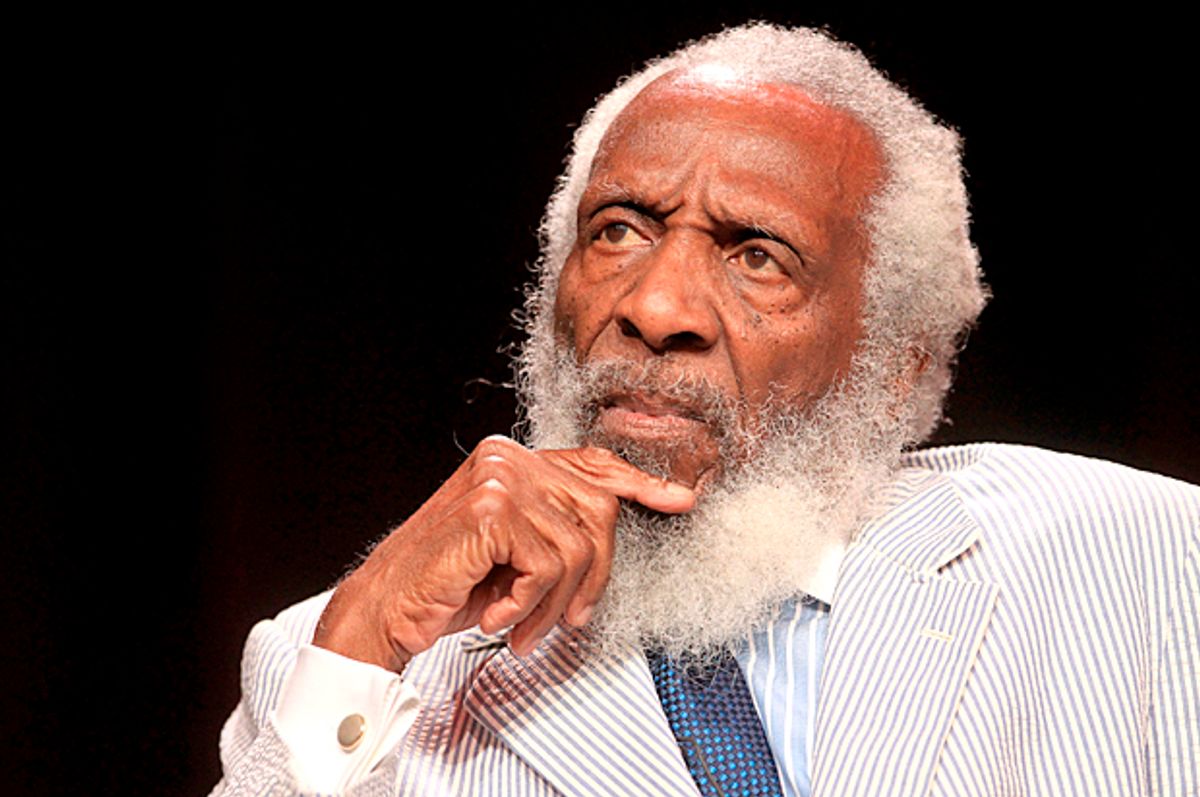 It was his bravery, his honesty, and original perspective that led to the many gifts he gave to us. We must thank the late great Dick Gregory for teaching us how to be forever free.

Dick Gregory was a humorist, Civil Rights activist, social critic, author and a flat-out revolutionary hero who was never afraid to say what everyone else was thinking. He only tackled the elephants in the room. We lost him on August 19 at the age of 84. Who would think the guy with the biggest heart in the world would cop out to heart failure? I say biggest heart because the stuff he said in front of white audiences back in the '60s and '70s could’ve gotten him killed — but they couldn’t kill him, because he was too good at his job. When Dick Gregory grabbed the microphone, everyone laughed. I bet even the most racist of the racists couldn’t hold their giggles in.

I first heard of Mr. Gregory back in '90s when I was in middle school. Rolling into school late on too many consecutive days earned me a seat in detention. Normally that meant an hour after school where some kids did homework and others earned more days in detention. One day a substitute teacher wearing a dashiki and covered in beaded necklaces walked in pushing a TV set.

“This is going to be different today, young bloods," he said. "Y'all gonna get some culture!”

I never saw the dude before. His shirt made me think he was from somewhere in Africa, but the toothpick dangling from his mouth and his slang made him sound like he was from over at the jail. He pushed a VHS tape into the slot on the TV, dimmed the lights and played us a collection of Dick Gregory stand up clips and speeches.

The class laughed so hard that the sub repeatedly tilted his glasses at us, as if to say, “Aye, quiet down before I cut it off!”

The bit that stuck out to me came from back in the day before Gregory had his signature beard. He was performing in front of a white crowd and talking about moving into an all-white neighborhood in Chicago. Mind you, this was during a time when redlining and blockbusting was sweeping the nation. Gregory told the audience that all of his rich white neighbors were away on vacation when he moved in, and they began returning home in the middle of a snow storm. A white woman saw him shoveling his steps and said that she never saw a front porch look so clean in all her years of living in that community. She asked him what his fee was.

“I get to sleep with the woman inside of that house," he said. "Would you like to be next?”

The crowd on the tape laughed as loud as my detention crew. I learned that poking fun at tough topics was a great way to examine issues while gaining understanding from both sides. Gregory was a pioneer of making people uncomfortable so that they could ultimately feel comfortable, all while challenging us to go above and beyond.

Gregory once said, “I never learned hate at home, or shame. I had to go to school for that.” And that is exactly what society does­­: It teaches us to be divisive, that every racial and ethic group is completely different, but Dick Gregory showed us, masterfully, that we all have laughter in common.

And more importantly, he did this without condemning his own people. Don’t get me wrong. Dick Gregory would cut any person bone deep with his words — no matter their color — if they were disrespectful. But mostly he educated his audience, acknowledged our country's problems, and offered more solutions than pointless critiques. He also had a way of understanding society and putting his findings into a language that we could all understand.

“I went to Ethiopia, and it dawned on me that you can tell a starving, malnourished person because they've got a bloated belly and a bald head,” Gregory said. “And I realized that if you come through any American airport and see businessmen running through with bloated bellies and bald heads, that's malnutrition, too.”

Even when we think he have figured out, icons like Gregory come along and flip our perspective. And he didn’t care if we were hurt or offended or sad or embarrassed or angry by what he had to say. He just wanted us to learn, to challenge ourselves and be better. And if we did that, if got out of our own way, then we would always find the humor. That was his life's work and his legacy.

Thank you, Dick Gregory. With that legacy, you will live forever.