Trump heads to Arizona: Will his supporters notice he's not building a wall? 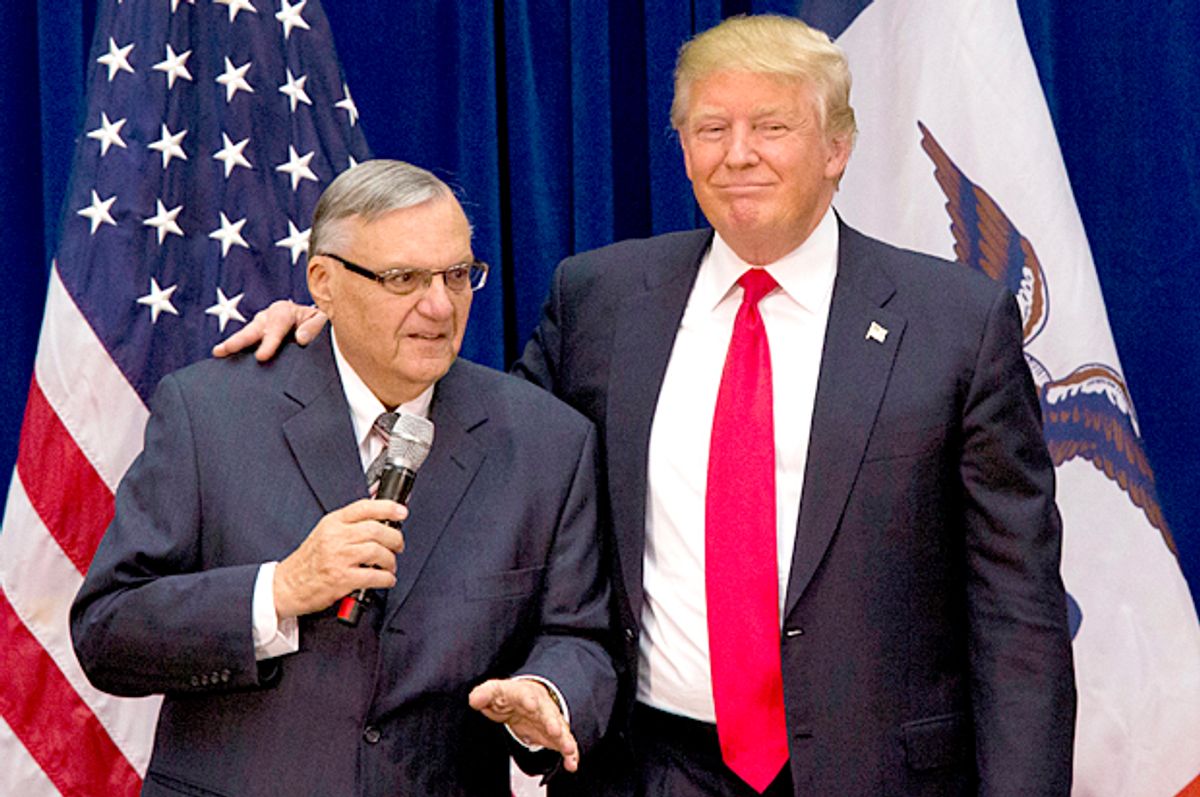 Donald Trump traveled to Arizona, which he described as a “special place,” seven times during his presidential campaign. He is now returning to the Grand Canyon State for a campaign-style event, barely a week after his divisive comments following the violence in Charlottesville were roundly condemned by nearly every corner of American society. If the Republicans who rushed to denounce his equivocation of white supremacists with anti-racist protesters last week actually seek to distance the GOP from racism, then they absolutely cannot stand by as Trump relies on racist rhetoric and scapegoating to deflect from his failed campaign promise of a "big, beautiful wall" along the U.S.-Mexico border.

Trump may not actually make good on his threat to pardon Joe Arpaio, the controversial former sheriff of Maricopa County (which includes Phoenix, by far Arizona's largest city), but his recent signals still serve as a cynical dog whistle to his base.

“I am seriously considering a pardon for Sheriff Arpaio,” Trump told Fox News — one day after a white supremacist killed a peaceful protester and injured nearly 20 more at the Charlottesville rally. Trump said that Arpaio “has done a lot in the fight against illegal immigration. He’s a great American patriot and I hate to see what has happened to him.”

Arpaio was recently found guilty of contempt of court for defying a judge’s order to stop racial profiling of Latinos and is due to be sentenced in October. During his long tenure, Arpaio was known for the harsh conditions at his county jails, and for his enthusiastic pursuit of undocumented immigrants. The controversial sheriff has also been one of the nation’s most vocal proponents of the “birther” conspiracy theory that questions whether Barack Obama was born in the U.S.

Although Arpaio  — who was sheriff for 24 years — was finally defeated by a Democrat last year, he maintains a loyal core following in Arizona. When he makes his return to Phoenix Tuesday night (against the wishes of the city’s mayor), Trump may be throwing a lit match into a tinderbox. As the city gears up for potential clashes between Trump supporters and what is expected to be a large group of counter-protesters in downtown Phoenix on Monday night, some Republicans are openly calling for the president to pardon Arpaio, a move that could only exacerbate racial tensions after one of the most emotionally inflamed weeks since the election.

“In his twilight years,” Arizona Republican Rep. Trent Franks said of Arpaio in a statement, “he deserves to retire peacefully and enjoy the satisfaction of a hard-earned and honorable retirement.”

Trump appears to have spent nearly all of the political capital a president possesses with his moral failure following Charlottesville. Last week saw the defection of leaders from business, charity and even one evangelical right-wing adviser. If Republicans allow Trump to use the bully pulpit at this point to pardon a birther and racist, it will be in large part to cover up for their own collective failure.

It is becoming increasingly obvious that Trump will never build the border wall he promised during his campaign. Mexico certainly won’t pay for the wall, and Congress isn't likely too either.

The House recently approved a spending bill that includes $1.6 billion towards building the wall, but it has stalled in the Senate. Unless Congress approves a new funding bill, the federal government will shut down on Oct. 1, and Trump has threatened to risk such a shutdown to secure funds for his wall.

Given the likely inter-party showdown over that issue that lies just ahead, and following Charlottesville, Republicans could use Trump’s visit to Arizona — and whatever antics come with it — as a way to provide the party with political cover against growing accusations of racism. After all, both of Arizona's Republican senators, John McCain and Jeff Flake, If have come under blistering personal attack from Trump in recent weeks. But it seems increasingly clear that leading Republicans have no power over their president. Their condemnations ring hollow, and they have no idea what he will do next.