Controversial right-wing site, home to Vice co-founder Gavin McInnes, may have flirted with hate once too often 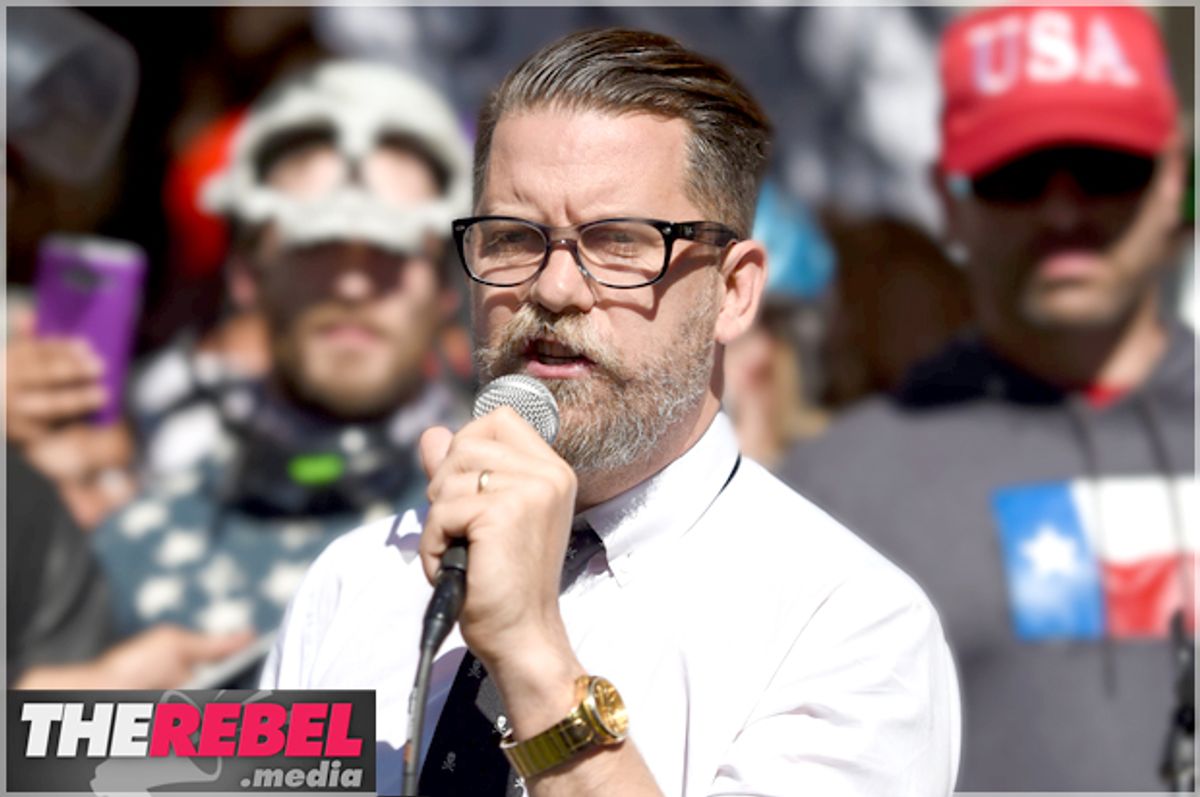 Until last week, it has been quite a lucrative run for CEO Ezra Levant, a former host at Sun News Network, an attempt to mimic Fox News Channel in the Great White North that folded after less than four years in 2015.

From the ashes of Sun, Levant decided to launch a web-only enterprise (whose name is frequently shorted to just The Rebel) which departed even further from journalistic norms than Sun News or Fox News did.

Besides keeping costs down compared to cable TV, an advantage of the web was that it allowed Levant to target the much larger American right-wing market that talk radio, Fox and conspiracy-mongers like Alex Jones had developed. After aligning itself with conservative establishment figures like Texas Sen. Ted Cruz, who had been raging at GOP party elders for decades, Rebel found a boon in the presidential campaign of Donald Trump, the first major Republican politician who matched the lowbrow vehemence served up by Rebel personalities like Gavin McInnes, a co-founder of Vice who has made himself into a strange combination of Rush Limbaugh and Howard Stern; Lauren Southern, a commentator who once boasted in print that nerds masturbate to her; and Jack Posobiec, a prolific conspiracy theorist who once plagiarized material from a white nationalist.

Throughout the Rebel's short existence, Levant has imported techniques used by political professionals into his operation. By the self-described “Rebel Commander’s” own admission, advertising has never been a big revenue driver at the company. Viewers are regarded more as political supporters than as people looking to kill some time between cat videos.

This was perfectly illustrated in a video released last week by a disgruntled former employee who noticed just how often Rebel Media’s hosts ask their viewers to sign petitions. Ostensibly, the petitions are sent to various politicians. But that masks their larger purpose -- to collect email addresses which can then be used for fund-raising solicitations.

A funny thing happened on the way to the bank, however: many of the radical conservatives that The Rebel had been cultivating started moving even further rightward. Instead of just raging against Muslims, Republicans or the Liberal Party of Canada, their viewers also began denouncing Jews, black people and financial elites. It was a strange place to be, given that Levant is Jewish.

That fact has "been one of [Rebel's] central defenses and one of their central tensions,” says Jonathan Goldsbie, the news editor at Canadaland, a website that covers Canadian media. Oftentimes when Rebel Media has come under criticism, Goldsbie says, Levant would accuse his opponents of anti-Semitism. At the same time, however, Rebel hosts have been willing to play to the fascists on occasion, allegedly in the service of comedy.

While neo-Nazi types have derided The Rebel as "alt-lite," the web video channel's efforts to market itself to the extreme right have repeatedly resulted in controversy.

In March, following a trip to Israel, Rebel host Gavin McInnes, a self-styled humorist, tweeted out a video that criticized the country for not being more zealous in its own defense. Originally, the clip was headlined “10 Things I Hate About Jews.” McInnes made the headline even more inflammatory in a tweet that read “10 THINGS I HATE ABOUT THE GODDAMN MOTHERFUCKING JEWS!”

After being met with praise by many "alt-right" types and horror by everyone else, the video’s headline was changed to “10 Things I Hate About Israel.”

In an email to Goldsbie, Levant said that he “chose both headlines.” As of this writing, the clip has been made private on YouTube. McInnes has not retracted the tweet.

Almost certainly, the social media snippet was designed to recapture outrage clicks related to another Rebel Israel controversy that had happened just days earlier, when McInnes and his colleagues Faith Goldy and Sheila Gunn Reid appeared to mock Israel and Jewish people during a segment on a web radio show McInnes hosts. (Salon’s Amanda Marcotte covered this at the time.)

Surrounded by wine bottles, the Rebel commentators jokingly referred to the “Jew World Order,” the “Jewspapers” and their boss as “Jewnicorn” and “Kim Jong-Ezra Levant.” McInnes then proceeded to criticize Jews and Christians for having a “suicidal mentality” that prevents them from acting in their own defense.

“We’re here in a brainwashing trip to learn how perfect they are, and all I’ve been learning is how imperfect they are. I’ve been becoming more and more annoyed by them,” McInnes said. “I’ve actually become more anti-Semitic since I’ve come here.”

Neither one of his colleagues went nearly as far in their criticisms, but Goldy did aver that “most of the Jews” were “giant Democrat-donor losers” who don’t realize how much the party hates them.

McInnes ended the segment by sarcastically intoning that “Jewbags” are harming Palestinians’ lives and that “Jews are ruining the world with their lies and their money and their hooked-nose, bagel-eating faces.”

The video caused a sensation with the "alt-right" as several figures, including former Klan leader David Duke and neo-Nazi Andrew Anglin, heaped praise on McInnes. Upon his return from Israel, McInnes hastily filmed another clip from the airport in which he stressed repeatedly that he “likes Jews.”

“No offense, Nazis. I don’t want to hurt your feelings but I don’t like you, I like Jews,” McInnes said. He condemned his critics for allegedly taking the first video out of context.

While the racist right reacted with glee to the Israel segment, the Candian press was aghast.

"This is about more than just the ideological pathologies of one weird Canadian media company," former Rebel employee Michael Coren wrote at the time. "It is about a warped new ideological arena where Zionists and creepy Nazi apologists are willing to overlook their differences in service to a common hateful cause."

In today’s constantly churning news cycle, the controversy soon faded away amid President Trump’s latest self-immolation. The question of how close The Rebel was to the extreme right remained open, however.

For months, McInnes has resisted being labeled a supporter of the "alt-right," but has at times sent conflicting signals. The “Proud Boys,” essentially a McInnes fan club, call themselves “Western chauvinists” but insist they are not racist and say they evict members known to be fascists. On the other hand, in April, McInnes gave his seal of approval to the formation of a paramilitary group calling itself the “Fraternal Order of Alt-Knights.”

The Rebel’s associations with the extreme right have inspired the creation of a Canadian offshoot of the Sleeping Giants, a group of American activists who have pressured advertisers to remove their ads from Breitbart News. On June 1, the Toronto Globe and Mail reported that several companies had blocked their promotions from appearing in Rebel Media’s properties. Both Breitbart News and The Rebel have condemned these efforts as censorship.

But the advertising pullouts did not affect Rebel Media much, given its highly successful crowd-funding and donation efforts. Things took a turn for the worse beginning Aug. 12, however, when Rebel host Faith Goldy provoked a massive controversy in Canada as she covered the now-infamous protest in support of Confederate memorials that was organized by white supremacist groups.

Broadcasting live from the “Unite the Right” event, Goldy, who endorsed the "alt-right" concept of “white genocide” in May, began condemning local police for failing to protect rally-goers' rights, even though Charlottesville officials had said repeatedly that they wanted to move the event to a larger venue to preserve law and order. She also casually referred to “the JQ,” "alt-right slang" for “the Jewish question.” Perhaps knowing her audience, she never defined what the term meant. After the rally ended with the death of counter-protester Heather Heyer, Goldy topped off her day by appearing on the podcast of a writer for the neo-Nazi website The Daily Stormer.

Despite Levant’s efforts to denounce the "alt-right" and his announcement that he was firing Goldy, her Charlottesville activities sparked a firestorm of criticism up north as many officials connected to the Conservative Party of Canada, including its leader, Andrew Scheer, rushed to denounce The Rebel.

“In Canada, it is our tradition for the media to hold politicians to account, not the other way around,” Levant said in an email to Salon, when asked if he believed The Rebel might be able to reconcile with former political allies.

The post-Charlottesville controversy also led the company’s co-founder, Brian Lilley, to announce his resignation. In a Facebook post in which he said he did not believe any of his former colleagues were racist or anti-Semitic, Lilley accused Levant of having once been “enamored” of the far-right movement.

“What anyone from The Rebel was doing at a so-called ‘unite the right’ rally that was really an anti-Semitic white power rally is beyond me,” Lilley wrote. “Especially not a rally dedicated to keeping up a statue of Robert E. Lee, a man that whatever else he stood for, also fought on the wrong side of history and the wrong side of America’s bloodiest conflict.”

He continued: “What The Rebel suffers from is a lack of editorial and behavioral judgment that left unchecked will destroy it and those around it. For that reason, I am leaving.”

Levant’s week from hell continued when McInnes tendered his resignation, The Rebel’s arrangement with Norwegian Cruise Lines was abruptly canceled by the travel company and former employee Caolan Robertson accused the channel of scamming its audience. (Levant strongly denies these allegations.) The "Rebel Commander" claimed that his site's domain name service provider canceled its account as well.

"It felt like a hurricane," Levant said in a video posted Tuesday evening addressed to The Rebel's regular viewers. "I felt like just hiding from it all."

Asked by Salon about declining YouTube subscribers, Levant argued that The Rebel’s recent loss of subscribers was primarily driven by the departure of Goldy, who had a popular following.

“We’ve lost 2 percent of our subscribers, almost all attributable to our loss of Faith Goldy,” he wrote in an email.

Time will tell if The Rebel will be able to weather this current storm. If it doesn’t, it will not be the first alt-lite media property to fail. In July, News Corporation’s Heat Street blog, which also tried to straddle the line between the mainstream hard right and the fascist right, also went belly-up.

"I've made mistakes. We're going to fix them," Levant said in his Tuesday message to supporters. "I feel like I had let down our staff, who are probably embarrassed by me."

The Rebel CEO admitted said he had been too busy to provide adequate supervision to his "rambunctious reporters." To remedy that, Levant said he was going to hire a new managing editor as well as a business manager in order to retool operations.

"I'm not going to let you down. I'm not hiding or quitting or going away," he said. "We're still alive."

Levant then directed his viewers to a petition website where they could declare that they "stand with The Rebel."

This article has been updated to include additional news since its publication.