In Alaska, a new life for old bones 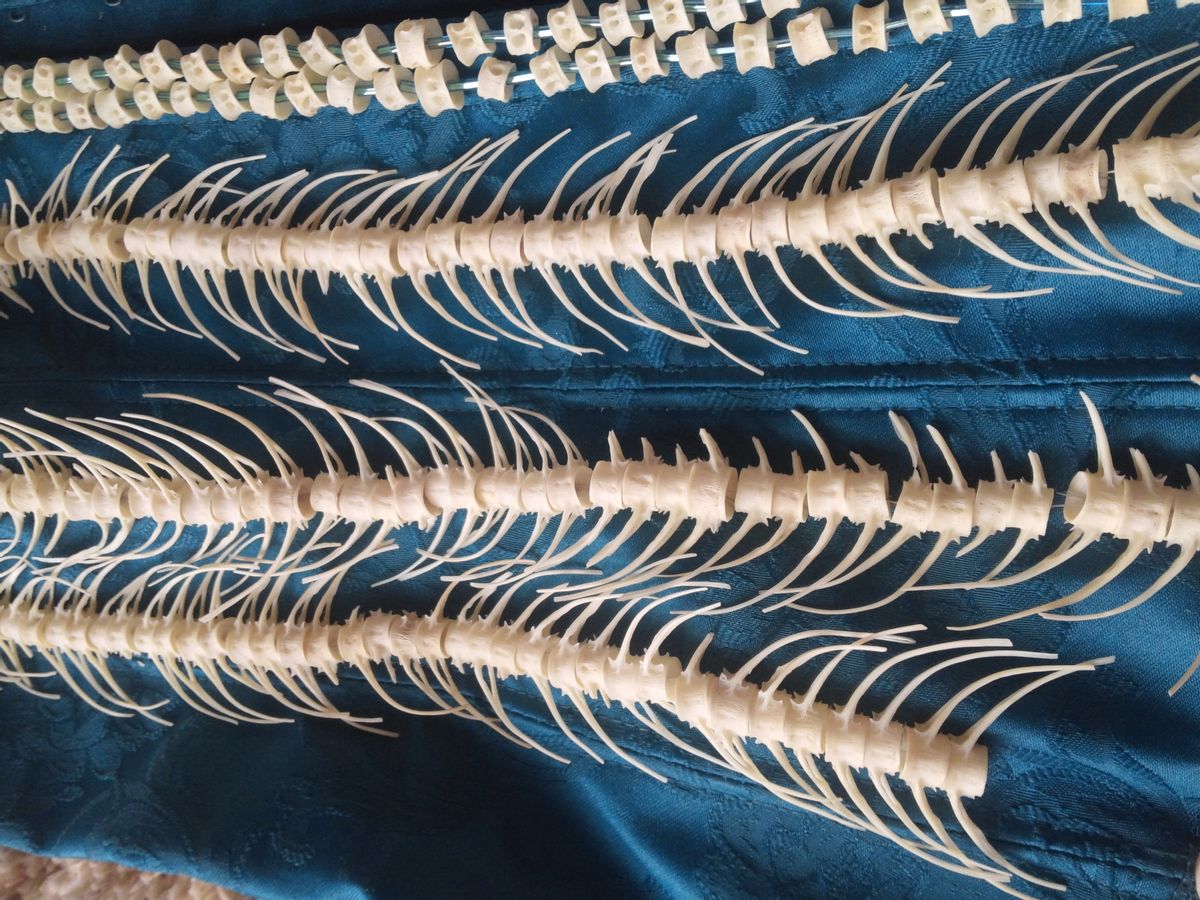 Upcycled salmon bones as wearable art (Courtesy of the artist)
--

Walking along a riverbank one day  towards the end of fishing season in her small coastal Alaska town, artist Cynthia Gibson came across a pile of fish carcasses — and saw something beautiful. “I’ve always thought that was really pretty,” Gibson said. “Then I was like, ‘Oh look, you can string [salmon bones] together. Wouldn’t that look cool?’”

Gibson is a financial advisor by day, but in her free time enjoys expressing her creativity through wearable art. Her art ventures include painting, refurbishing furniture, sewing with fish skins, and making jewelry and clothing out of salmon bones. She first came into the spotlight after unveiling a dress made entirely of salmon bones.

Gibson worked for a time at the Alaska Raptor Center, a bird rehabilitation facility in Sitka. There, she was responsible for cleaning the bones of birds used in the education department. “I took my knowledge from my job and applied it to the fish bones,” Gibson said.

Salmon vertebrae have a small hole in the center where the spinal cord runs through; for Gibson, using this opening to string bones together was a natural step forward. She began by using salmon bones to create earrings, eventually moving on to clothing and sewing some bones onto a corset. Then “three or four” years ago she created a flapper dress out of salmon bones and vinyl records.

“The flapper dress kind of gave me the idea for [the salmon dress],” Gibson said. “I ran out of bones on that dress. I was like, ‘Now I have to get serious to collect enough bones to make an entire dress with only salmon bones.’”

The salmon bone dress debuted at the 2017 Sitka Wearable Art Show on March 11, 2017. The annual event, put on by the Greater Sitka Arts Council, features wearable art designs made by locals using only reused and recycled objects.

But the dress, which garnered national attention, was created in the hopes of premiering the piece at the World of Wearable Art Show in New Zealand, the largest wearable art show in the world. Her entry was not accepted.

“I was kind of disappointed because I spent so much time on it,” Gibson said. “When they didn’t accept it I was like, ‘Well, it’s gonna have a new life somewhere, somehow. I’ll just maybe bring it to the wearable art show in Juneau.’”

Instead, it ended up in her hometown wearable art show. Now, Gibson said, the dress is slated for a trip to the Lower 48, where Coos Art Museum in Coos Bay, Oregon will have a temporary exhibit. The University of Alaska Fairbanks, one of three major campuses in the state university system, has  also contacted Gibson about purchasing the dress for the University of Alaska Museum of the North permanent collection.

Gibson said she is unsure if the success of her salmon bone dress has been due to Alaskans’ love of salmon — which generated $4.2 million dollars of revenue in 2016 according to the Alaska Department of Fish and Game — or because it’s actually “a super cool dress.”

“It makes all that time I spent on it worthwhile, inspires me and gives me the energy to think, ‘What’s the next thing? How can I push myself and grow and be more creative and inspired?”