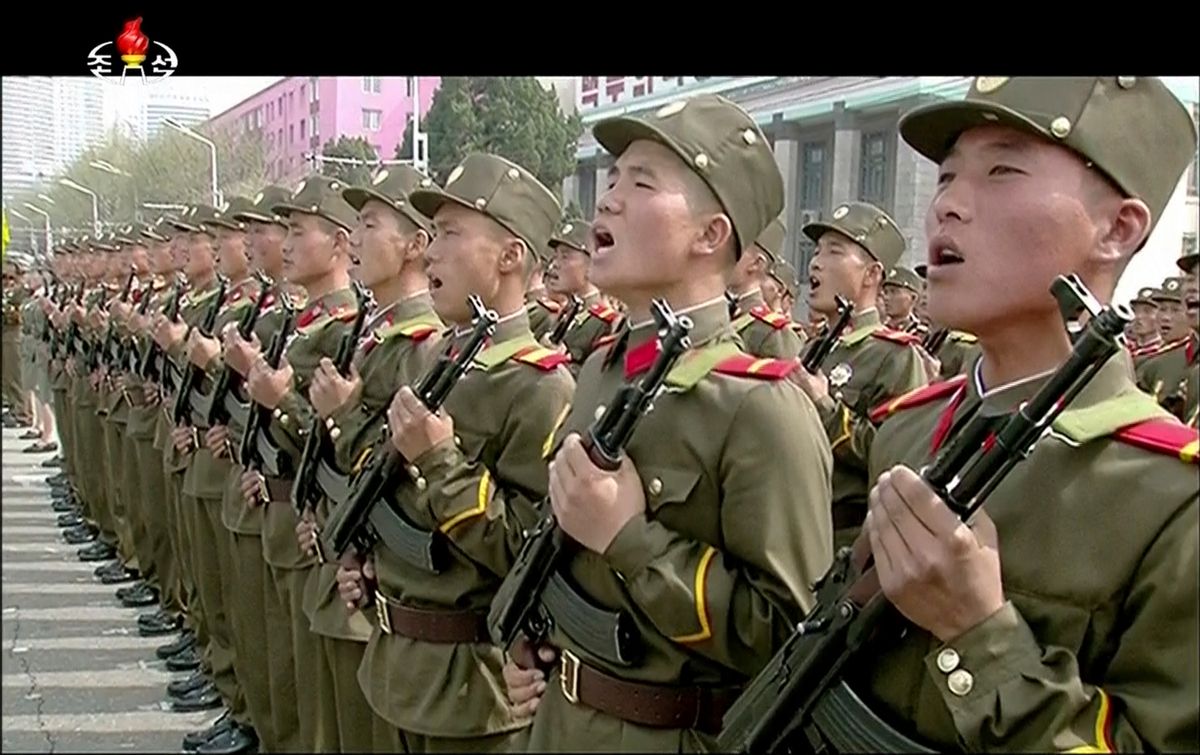 In this image made from video broadcast by North Korean broadcaster KRT, soldiers take part in a parade at Kim Il Sung Square in Pyongyang, Saturday, April 15, 2017. (KRT via AP)
--

Dealing with North Korea’s ambitions for nuclear weapons has vexed the past four U.S. presidents.

Since North Korea withdrew from the Nuclear Nonproliferation Treaty in 2003, it has detonated nuclear explosive devices five times and made steady progress on its ballistic missile program. In late July, Pyongyang tested an intercontinental ballistic missile that many analysts say could reach the West Coast of the United States and possibly beyond.

Since then, President Donald Trump and North Korean leader Kim Jong Un have traded bellicose rhetoric, while Secretary of State Rex Tillerson has left the door open for a diplomatic resolution.

Getting back to the negotiating table could be as simple as proposing a time, place and agenda. Trump expressed a willingness to negotiate directly with North Korea during the 2016 campaign and earlier this year, saying he’d be “honored” to meet with Kim.

With the rhetoric on both sides escalating, it’s difficult to discern whether Trump still feels the same. But should negotiations happen, we can gain important insights from past negotiations.

North Korea’s Kim Jong Il — the current leader’s late father — and Kim Il Sung, the founder of North Korea, have frequently been characterized as a crazy, irrational and unpredictable. But both negotiated with the United States and other parties. During the Clinton and George W. Bush administrations, they did what rational actors do — tried to get the best deal they could that satisfied North Korea’s interests.

Some analysts argue that Pyongyang didn’t honor the agreements that were achieved in those negotiations. This is only partially true, and what happened is more complicated than many critics of diplomacy want to admit.

In 1994, President Bill Clinton’s administration negotiated what was dubbed the “Agreed Framework.” In return for freezing operation of its nuclear reactor and plutonium reprocessing plant at Yongbyong, North Korea would get two light water nuclear power reactors, removal of sanctions and a commitment to eventually normalize relations. While the reactors were being built, North Korea would receive shipments of heavy fuel oil to address its power needs.

But Congress was slow to remove sanctions on Pyongyang, as they had agreed to do. Movement on construction of the light water reactors was hampered by a number of factors, which infuriated North Korea.

The deal fell apart when the Bush administration took over. It accused North Korea of clandestinely developing a uranium enrichment program, which would provide another route to the material necessary for a nuclear weapon.

While a uranium enrichment program signaled that North Korea might still be pursuing a nuclear weapons option, it was not technically a violation of the Agreed Framework.

Had the Bush administration addressed the uranium enrichment issue separately, I believe it might have saved the agreement and its freeze on the North’s nuclear program. Instead, the entire deal collapsed in 2002. North Korea withdrew from the Nuclear Nonproliferation Treaty the next year and continued to develop its weapons, testing its first in 2006. As a former, senior George W. Bush official told me in 2007, the “ABC” policy (“anything but Clinton”) was the initial major motivator for abandoning engagement as a policy with North Korea.

Much like with the Iran nuclear deal, American hardliners argue that the only acceptable outcome with North Korea is complete nuclear disarmament with little offered in return. In my view, the U.S. would have to make concessions to curb Pyongyang’s nuclear program, as it did before.

The Bush administration adhered to the hardliner approach for much of the 2000s with Iran, and was unable to reach a deal to curb its nuclear program. By contrast, North Koreans have even more leverage than Iranians — who did not have nuclear weapons, only aspirations. North Korea already has at least two dozen nuclear weapons. That is why I believe a hardline approach would likely end in failure.

Instead, the framework stipulated that the United States and North Korea would work to normalize relations, and the U.S. would give the North security assurances, promising not to use or threaten to use nuclear weapons against it. Pyongyang’s quest for security through military power is the same today has it has been for years.

In the past, North Korea has made provocative moves that tested the patience of negotiators. For example, after the conclusion of the Agreed Framework, North Korea flight-tested a Taepodong-1 missile test in 1998. Adding to the provocative nature of that test, the missile flew over Japan, angering the U.S. Congress and prompting Japan to cut off food aid.

Then, during the Bush administration, the North launched a satellite in 2009, which was likely a test of ICBM technology. The launch was condemned by the United Nations, which subsequently promised sanctions as punishment — prompting North Korea to leave the talks for good.

The U.S. must be careful not to let provocative actions not directly related to the the issue at hand (nuclear rollback) derail negotiations. In my view, they are better noted and condemned at the time but addressed separately.

Special envoys with deep diplomatic experience have been invaluable in diplomacy with North Korea and will be important if we want effective negotiations today. Veteran diplomat Robert Gallucci, former Defense Secretary William Perry and Ambassador Christopher Hill were instrumental in previous nuclear talks.

But other private citizens who have interacted with the Kim regime at high levels illustrate that at there is the possibility of direct engagement. Dennis Rodman may be the only American to have met Kim Jong Un. Former Energy Secretary and former New Mexico Governor Bill Richardson has a long history of communicating with the Kim regime. And scientist Sigfried Hecker has visited North Korea several times and been allowed unprecedented access to details of Pyongyang’s nuclear program.

And we should not discount the potential personal involvement of President Trump, who said in May that he saw nothing wrong meeting face to face with Kim: “It’s called opening a dialogue.”

The past indicates that negotiating with North Korea is not an impossible or fruitless endeavor. But the United States will have to adjust its expectations and be creative in dealing with a country with a more advanced nuclear weapons and missile program than the North Korea of 1994.