Does Trump think that taking us deeper into a 16-year-old disastrous war is going to convince us that he's a real leader? 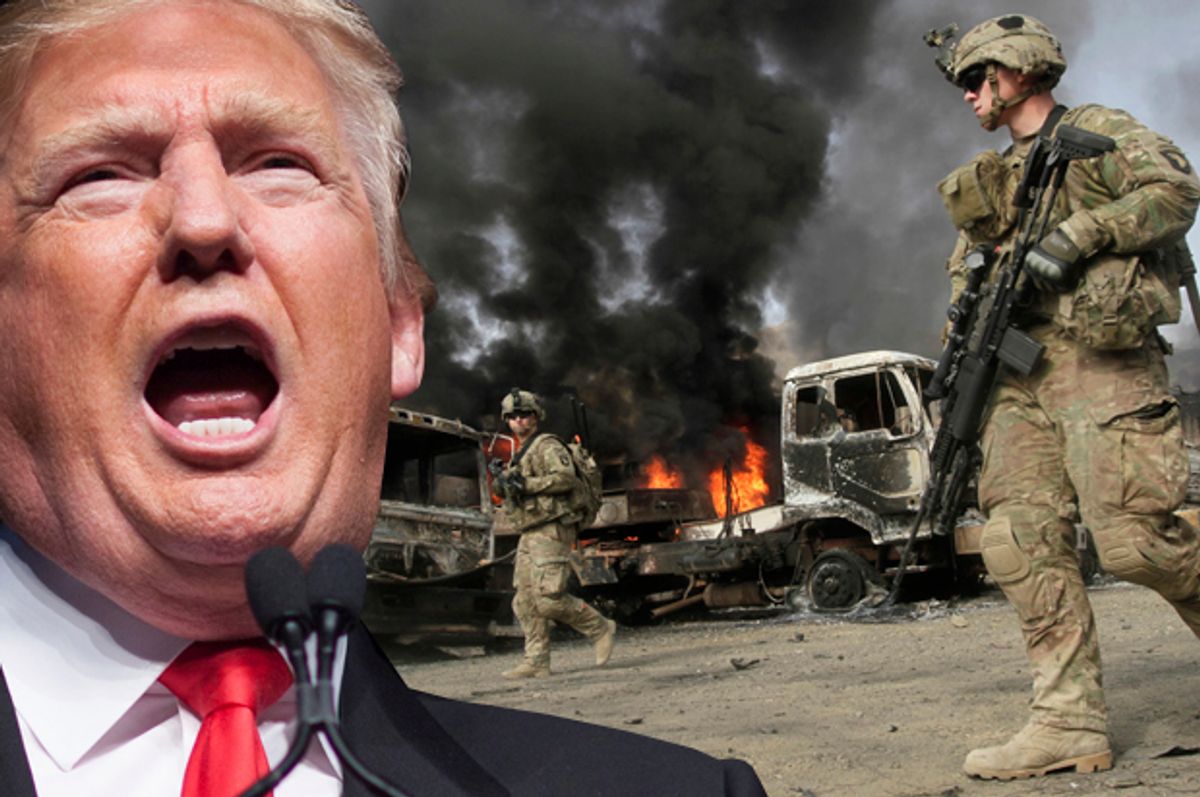 There is an emerging pattern to the trajectory of the Trump regime in the wake of Charlottesville.

While corporate CEOs flee the taint of association with a neo-Nazi sympathizer in the White House, the obviously unconvinced commander in chief is sending 4,000 more troops to Afghanistan without a visible goal or plausible timetable.

The president, his family and associates are under criminal investigation for colluding with a foreign power and obstructing justice, while the U.S. government and its allies wage five wars (Iraq, Syria, Afghanistan, Somalia, and Yemen) against forces that pose about the same threat to Americans as domestic terrorists.

The ability of the president and the Republican Party to keep the government from defaulting, much less passing significant legislation, is openly doubted in Washington while Trump’s intention to renege on the 2015 nuclear non-proliferation deal with Iran in October is sure to outlive the departure of Steve Bannon.

As Jeremy Scahill writes in The Intercept:

The reality that Trump may not even finish a full term as president, either due to removal or resignation, means that the palace intrigue must be reported on thoroughly by the press. But a dangerous consequence of the overwhelming, obsessive focus on the daily Trump affairs is a virtual dearth of coverage on the permanent, unelected institutions of U.S. power, namely the military and the CIA.

The focus on daily Trump developments has to include the story of who is gaining influence as Trump’s presidency shrinks.

The firing of Bannon, announced by Gen. John Kelly, White House chief of staff, is a victory for military interventionists.

When Trump balked at the Afghan troop increase proposed by two other generals, Defense Secretary James Mattis and National Security Adviser H.R. McMaster, Bannon made a very sensible point, according to the Times. The Bush and Obama administrations, said the now-former adviser, had both sent more troops with no visible impact on the growing strength of the Taliban or the continuing weakness of the Kabul government:

“For 16 years, from neocons to progressives to Obama’s people, they all thought they were making great decisions,” Mr. Bannon said, according to a person in the room. “Why are we any smarter than they are?’’

The answer from Mattis and McMaster — because we are generals — was as predictable as it was lame. Bush and Obama’s generals said the same thing when demanding more troops.

Once upon a time — four and half years ago, to be exact — Trump rejected the Pentagon’s logic.

I agree with Pres. Obama on Afghanistan. We should have a speedy withdrawal. Why should we keep wasting our money -- rebuild the U.S.!

The "speedy withdrawal" Trump has been trumped by the "4,000 more" Trump.

Of course, the ascension of generals to key positions atop the U.S. government is not the cause, but the effect of the militarization of the U.S. government, which has been growing steadily since 9/11. Trump’s role is increasingly ornamental.

Obama gave the Pentagon and the CIA a massive escalation in drone warfare, but he stifled the CIA-funded rebels in Syria. Obama ended the Bush policy of torture, but he helped make sure the Senate Intelligence Committee report on its horrifying details never saw the light of day. In Scahill’s words, Obama “served as a launderer for operations of some of the most aggressive forces in the U.S. arsenal.”

Trump serves as enabler of those forces. Bereft of accomplishments, he has no agenda other than to destroy what Obama did and to “get tough,” as he did in his hollow threat to rain “fire and fury” on North Korea if it ever threatened the United States again. On Monday, North Korea threatened "merciless strikes"; Trump said and did nothing.

In practice, Trump’s Cabinet secretaries walk back his rhetoric while the president writes proverbial blank checks that national security agencies can cash in whatever way they want.

He has loosened the rules of U.S. military engagement against the Islamic State in Syria and Iraq with predictable results. “Civilian casualties have increased sharply. . . ." reported the Guardian in June, "with nearly 60 percent of the officially acknowledged deaths from the three-year war being reported in the first three months of the Trump administration.”

He has backed Saudi Arabia to the hilt in Yemen despite the fact that the war has produced a humanitarian catastrophe.

He has badmouthed the NATO alliance and traditional allies, but hasn’t done anything to scale back or reposition the U.S. military in Europe.

Trump has now expanded U.S. military operations in every theater he has inherited from Obama, and the trend is likely to continue as his political isolation deepens. Unilateral military action is one of the few tools he has left to demonstrate his “leadership.” Like raining cruise missiles down on a Syrian airbase, sending more troops to Afghanistan gains him praise from long-time critics and his base voters alike.

But the combination of racism at home and bluster abroad now alarms even Trump allies in Congress who once held their tongues.

Trump “has not yet been able to demonstrate the stability nor some of the competence” needed in a president, said Sen. Bob Corker R-Tenn. chairman of the Foreign Relations Committee. Corker says he fears that “our nation is going to go through great peril” and called for “radical change” at the White House.

The peril is obvious but the radical change has already happened: The generals are in charge.