Opposition to Trump and the GOP has reawakened liberals and progressives — so why can't the DNC raise more cash? 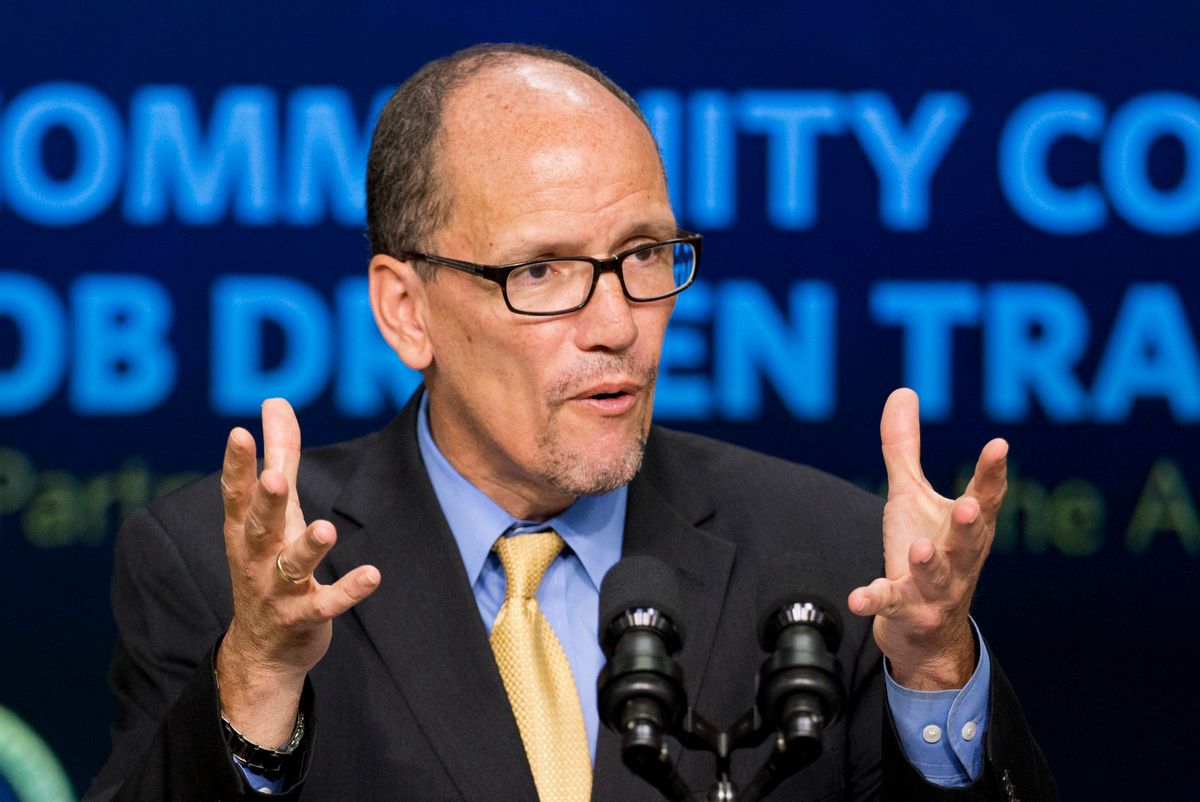 In politics, elections held between presidential contests are supposed to be good for the opposition party. That's because of the phenomenon that political scientists call "negative partisanship," the idea that people are more motivated to oppose policies they don't like than to support politicians with whom they only partly agree.

Since the Civil War, the president's party has lost seats in almost every mid-term election. (There are two recent and notable exceptions: Democrats gained seats in 1998, when Bill Clinton actually gained popularity after the Lewinsky scandal; and Republicans gained seats in 2002, the first post-9/11 election.) A president's supporters, it seems, almost invariably become disenchanted with the person they had chosen to be the chief executive.

While Donald Trump's poll numbers among Republicans have mostly been holding up, he has about a 35 percent approval rating overall, the lowest ever for a president this early in his term. Trump is at war with his own party's elected officials, and he keeps talking about how much he loves memorials to the Confederacy.

"We really should be kicking their asses," an anonymous Democratic donor told The Hill last week. "It shouldn't even be close, considering all hell is breaking loose on their side."

At the state level, anti-Trump enthusiasm has certainly been made manifest. In a study released last month by the Brookings Institution, researchers found record numbers of Democratic candidates running for seats in the House of Representatives. No cycle has had anywhere near the number of aspiring candidates from one party in recent history. Nor are these candidates just wannabes, as New York magazine's Ed Kilgore observes: "In 2009, the Republicans had mustered 50 legitimate candidates to challenge Democratic incumbents. The Democrats have doubled that."

Among party committees established to raise money for candidates, Democrats are ahead of their GOP rivals as well, although not by such a lopsided margin. According to Federal Election Commission data, the Democratic Congressional Campaign Committee, the party's fundraising apparatus for House candidates, has brought in slightly more money so far than its Republican equivalent. Ditto for the Democratic Senatorial Campaign Committee. ActBlue, a third-party fundraising site, raised $27.6 million in July, compared to $13.7 million in the same month in 2015, and $5.9 million in 2013. Jon Ossoff, the losing Democratic nominee in a recent Georgia special election, brought in a record-breaking $30 million all by himself.

But when it comes to the central party offices, however, the picture is very different: Republicans have been outperforming Democrats by a significant margin.

After a long and controversial leadership election, Democratic National Committee chair Tom Perez brought in a whopping $12.2 million in March. But since then, the picture for Democrats has been far bleaker. In April, the DNC raised $4.7 million, the lowest amount for that month since 2009. In May, it brought in $4.3 million, which was the lowest for that month since 2003. In July matters got even worse, with just $3.8 million collected.

By contrast, the Republican National Committee raised $10.2 million in July, a record for the party in the month. In June, the GOP brought in $13.4 million, another record. Back in May, the total was $10.8 million, also a record for that month.

For the 2018 cycle in total, the RNC has raised about $86 million so far, more than double the DNC's $42 million. When it comes to cash on hand, Democrats have a paltry $6.9 million, compared to the GOP's $47 million.

Some of the disparity between the parties likely reflects the fact that Republicans control both houses of Congress as well as the presidency. High-dollar donors like to have access to promote their agenda items, after all. Additionally, Perez is still in the process of staffing up the party committee, including hiring the people assigned to raise money.

But money from fat cats is not the only reason why the GOP has been outpacing the Democrats so significantly in 2017. In terms of small-dollar donors -- people who give less than $200 -- Republicans are doing better than ever before. Democrats, by contrast, are having trouble keeping up. From January through June, the RNC raised $33 million in small donations, compared to just $21 million for the DNC.

"It's definitely a reflection of support for President Trump," RNC spokesman Ryan Mahoney told the Washington Examiner in July. "Our small-dollar donors are giving at a record pace because they believe the RNC is supporting President Trump, and they like that."

As both Ossoff's defeat and Trump's victory have shown, money isn't everything in politics. Being better funded than a rival is no guarantee of success. The newfound GOP advantage among small donors ought to send up serious red flags for Democrats, however, especially considering how well Bernie Sanders' insurgent presidential campaign did among small-dollar donors.

Sanders' former fundraising director, Michael Whitney, made this point quite clear in an Aug. 10 column for Politico:

This isn’t just about money. Small-dollar donors are an important measure of how much grass-roots enthusiasm a campaign or organization has. They are the supporters who will show up to knock on doors, make phone calls and get out the vote. And since they don’t donate enough to reach campaigns’ individual contribution limits, you can return to ask them for money time and again — which frees campaigns from continually being on the hunt for new, deep-pocketed donors who can max out. The lack of their support threatens to prevent major gains by the party in 2018 and beyond. ...

Nearly 3 million people made more than 8 million contributions to the Sanders campaign because they correctly believed there were no millionaires, billionaires or super PACs behind the effort — nobody who would step in to save the campaign in a rough patch. We would sink or swim together, at an average contribution of (as you know if you ever heard Bernie speak) $27 apiece.

It’s a simple principle, one that Democratic candidates from Bernie to Elizabeth Warren to Obama understood, but which the institutional Democratic Party now seems incapable of grasping: People are motivated to act when they feel like part of something larger than themselves — and when they understand that their participation in that larger something makes a real difference. The Democratic Party’s woes are basic symptoms of the failure to understand that immutable reality.

Part of the disconnect between Democrats and their voters has been the strange way that the DNC has chosen to communicate. Earlier this week, the party literally sent a message blasting Trump for not building his famous border wall:

Democrats also seem to be using the sleazy tactic of sending fundraising letters designed to look like collection letters from a creditor:

The DNC has also likely been harmed by the fact that neither of the Democratic Party's most visible past leaders, former President Barack Obama and 2016 nominee Hillary Clinton, are working to raise money for it, as the New Republic's Clio Chang notes:

As reported in Politico last October, Obama’s main political priority post-election is to support the National Democratic Redistricting Committee, a new group launched in January and chaired by Eric Holder, Obama’s former attorney general. The NDRC’s focus is on rolling back a decade’s worth of gerrymandering by the Republicans that has decimated the Democratic Party at the local level. While Obama has largely stayed out of the political fray, he did return for one night to host a private fundraiser for the NDRC in July. According to Politico, the NDRC has raised $10.8 million in the first half of the year, much of it from mega-donors like Donald Sussman and Fred Eychaner.

Clinton launched Onward Together in May, a political nonprofit whose stated goal is to help support grassroots groups opposed to Trump. But it remains an open question just what kind of groups her organization will back. Meanwhile, we’ve seen a proliferation of Clinton-esque groups like New Democracy and Win the Future, which seek to steer the party toward the center.

Seemingly aware of the party's troubles with its base, Democratic congressional leaders like Sen. Chuck Schumer of New York and Rep. Nancy Pelosi of California in July unveiled a new initiative they called "A Better Deal," which they hope will reorient the party toward economic issues that can unite all Democratic factions and help heal the Bernie-Hillary divide.

It's too early to perceive the effects, if any, that the Better Deal agenda will have. But Democrats face a strange quandary and clearly need to make adjustments while they can. It's still a long way from November of 2018, but as unpopular as Republicans' policy agenda may be, they've got a hell of a lot more money.