Meet "It" boy Harris Dickinson of "Beach Rats," the woke hunk you've been waiting for 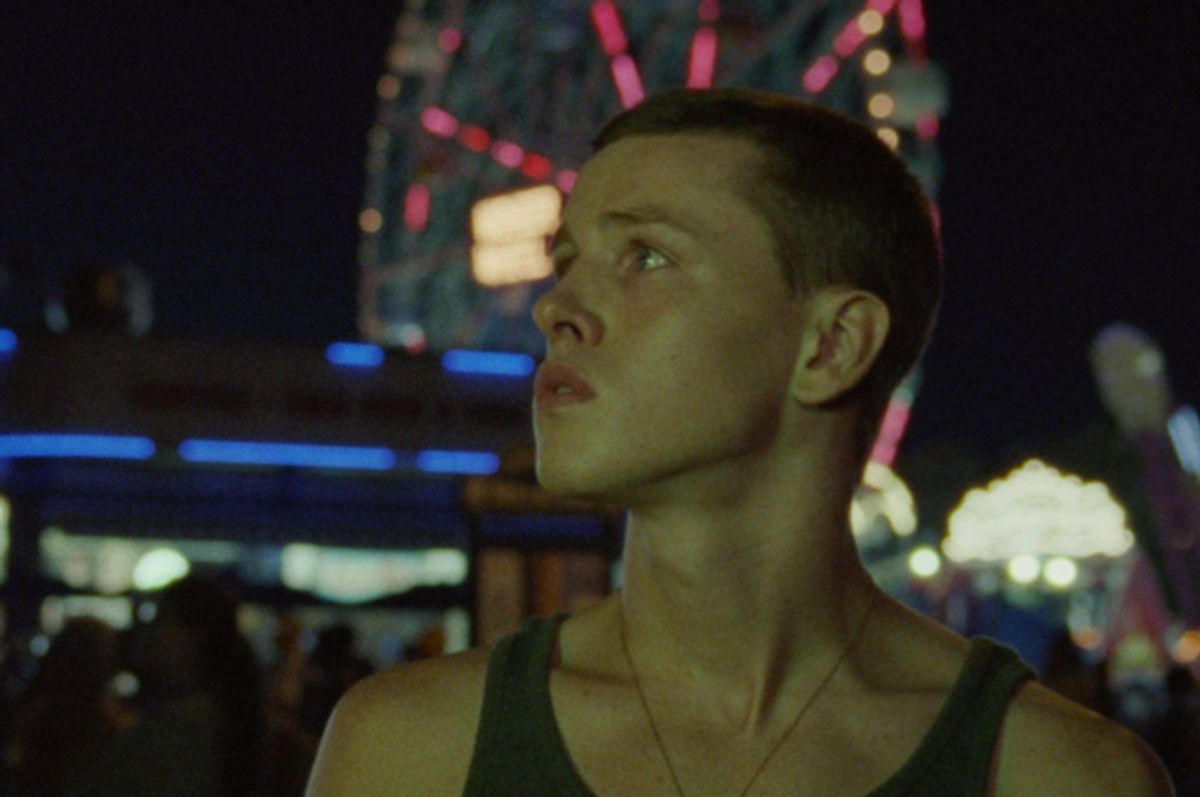 As Frankie, a dudebro on the down-low, Harris Dickinson gives a breakout performance in “Beach Rats.” Writer and director Eliza Hittman’s astonishing sophomore feature has the aimless, working class Brooklynite, Frankie, hanging out with his buddies, engaging in a tentative relationship with Simone (Madeline Weinstein) and secretly cruising for sex and drugs on gay chat rooms.

His assignations with a series of men — at night and often on the beach — along with his continuous efforts to get or stay high, provide Frankie with his only outlets from a stifling home environment and a go-nowhere life.

For some viewers, “Beach Rats” — which debuts in select theaters today — may serve as an apt complement to “Moonlight,” in its presentation of inchoate masculinity and a central character grappling with identity issues in lower-class circumstances with a lack of positive role models. Granted, the element of black life is missing here, but there are easy parallels nonetheless.

Frankie’s story unspools in the Coney Island environs of smoke, skin, sand and waves. The palpable longing Frankie has for wanting to be his true self in a world that may not understand him gives Dickinson’s performance indelibility and his career as an actor, promise. Dickinson immerses himself so fully into the role that most viewers may be surprised to learn he’s British.

Salon caught up with the sure to-be-in-demand actor to talk about making “Beach Rats,” his identification with and portrayal of Frankie and his very particular idea of what constitutes romance.

Most viewers will be seeing you for the first time in "Beach Rats." Can you talk a little about your background and how you came to make the film?

I was working in a bar and I was auditioning a lot. I’d done theatre and TV, but I'd not done a feature film or played a character that was this demanding. It intrigued me that this working-class character was going through a sexual identity struggle. It's a tragic story, but it's also very interesting as an actor to portray. I'm obviously not from that area, so it was enjoyable for me to [sink] my teeth into that and do that youth culture justice.

As someone removed from his experience, how did you identify with Frankie?

Frankie was recognizable in that it was that toxicity that builds inside a person when you suppress feelings — what's prohibited in your upbringing, friendship groups and society. I identified with that inability to communicate or comprehend it, that inarticulation, and being lost as a teen. I think everyone has this.

What did you struggle with as a teenager?

Many things. Nothing I want to talk about publicly.

How did you see Frankie? He is obviously conflicted about his same-sex desires, unable to say he wants to see a guy's dick but physically able to perform when he meets guys for sex. He says he does not think of himself as gay. How do you see him?

I think the film frames his life where he's on the brink of discovery. It's hard. He says, "I don’t know." He struggles to say the words. It's so drilled into him that [being gay] is wrong, and the fear is so present. He's letting these emotions surface, but the moment he's happiest is when he’s acting on these desires. It's interesting to intellectualize. I can’t unpack it.

How did you calibrate your performance? Frankie reveals so much without saying much. He seems comfortable in his own skin at times but generally full of anxiety and conflict. Can you talk about that aspect of representing him?

I think so much of the script was kind of unwritten, with parenthetical descriptions. We found much of it on the day [shooting]. These vital, unspoken moments are when you see the character's psychology the most. He's watching something — but I think I was able to capture that, because I was going through the motions in my head, and understood his psychology.

The film is a very intimate observational character study. Rather than articulate it in lengthy dialogue, Eliza created a film that can be narratively driven by being played in those moments. There’s a moment with Frankie in the car with Jeremy [Harrison Sheehan] and it was so difficult to play, because there's this huge weight piling on Frankie with the anticipation of what’s going to happen. He wants to say something and cry out for help. It's all unspoken desperation.

Yes, that's what makes the film so exciting and dangerous! What can you say about the various bad decisions Frankie makes?

I think it's easier for Frankie to be self-destructive. Everything he does feels like punishment, and against his true emotions. I've seen it in peers. So much of it is misguidance and having no direction in their lives, and zero passion. It also became a numbness; self medicating and morally choosing to do the wrong thing. He dances on the line of being unlikable.

I didn't think he was unlikable. I understood him, because of your internalized performance. That early scene where Simone wants to have sex, and Frankie says he’s wasted to get out of it . . .

That scene where he can't get it up, that insecurity and embarrassment leads him to be vindictive. It's a teenage coping mechanism in social situations.

Yes! The film beautifully presents the juxtaposition between Frankie’s homosocial world with his buddies and the world of the gay chat room, sex in the sand dunes and the motel. Can you talk about how you portrayed these two sides of his life?

Frankie has four assignations with guys (and three with Simone). Can you discuss the different sex scenes, which really informed Frankie's persona, given how he is active or passive with his partners?

I think it's interesting that the scene after the boat party, which is very self-destructive and part of his downward spiral, leads to him giving head at the beach. That is an aggressive encounter and not at all enjoyable for Frankie. When we see him [earlier] with the older guy, it's quiet, and he's embarrassed. It's dark on the beach. It's all about the quick sexual pleasure. The hotel scene is the first time he’s really enjoying it and slowly felt at ease, and it's shot beautifully, and the pace is tranquil. The sex scenes certainly contrast and have their definitive notions and say a lot about his psychology at the time.

What can you say about filming on Coney Island and capturing the realism of that place, how the local color, e.g., playing handball, informed how you played Frankie?

I got there about a month before shooting. I was playing handball. I spent time in the area, talking to a lot of people and exploring the locations and digesting them, and the accents, and meeting people and just absorbing every nuance I could. I scrambled around with guys on the beach. That was fundamental in creating the film’s authenticity.

"Beach Rats" is a sexy film but it's not a romantic one, so let me ask you a question the characters ask Frankie: What is your idea of romance?

[Laughs]. My idea of romance . . . is . . . Okay. I have an idea . . . I think my idea of romance is tailor-made pleasure. Whether it is food, or a sexual encounter, it's tailored to your own desires. That makes it more romantic. It's selfishly pleasurable.