Time was a savage single from Taylor Swift would have stopped us in our tracks. But she can't top our new villains 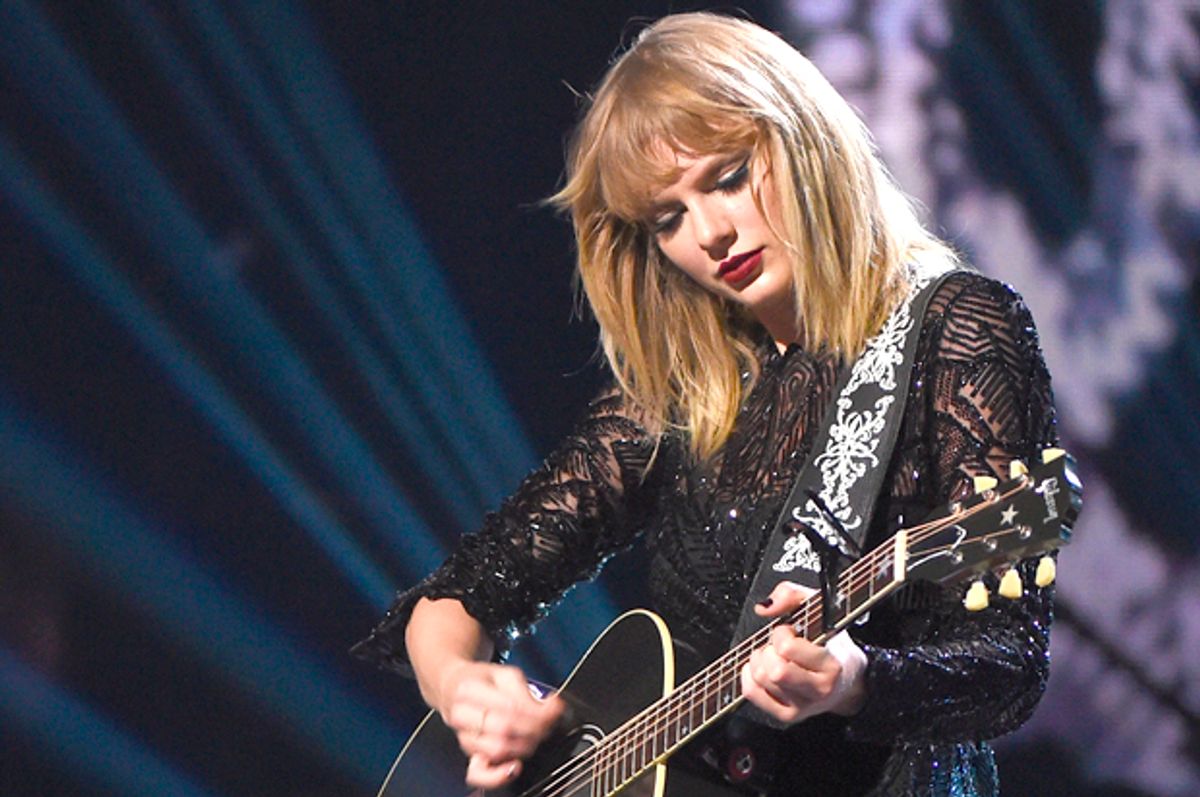 Time was I would have stayed up Thursday night until Taylor Swift dropped her new single. Then, I would have gathered my first thought/best thought about Taylor and the Kardashian West Feud and banged out 500 words immediately on What It All Means: the pop star as painfully obvious cultural ouroboros, perhaps, with an articulated wince at that one Charlotte Russe-level Sylvia Plath knockoff line.

Then morning would come and along with it the second and third waves of takes — oh, the takes on takes! — as we would litigate every word of Swift's late stage Tamora, Queen of the Goths phase.

“Taylor Swift and the Twisted Language of the Abuser”

“Don’t Tread On Tay: What Taylor Swift Just Told Us About How She Votes”

“Look What Kimye Made Taylor Swift Do: Actually, Revenge Is a Feminist Act”

Sunday night’s VMAs — a night even trashier than the Golden Globes, of course —  would follow. This year, Swift is making us watch every painful second of this sham of an awards ceremony just to see her new video and write about the VMAs one more time, damn it. Perhaps even Kanye would Do a Thing, as he may now be contractually obligated to in whatever blood ceremony he and Swift acted out in the menacing shadow of the totality. Jon Snow who?

I won’t lie; part of me has yearned for this throwback to 2015-level dramatics, the safe Ryan Murphy bitchiness of it all. I miss the brand of soap opera in which public acts of vengeance are as meaningful and permanent as a vicious Barbie doll tableau and not the real time ramifications of electing a Mad King president. Don’t we deserve a frothy treat in the middle of a “Black Mirror” episode we can’t escape?

So yes, today #LookWhatYouMadeMeDo is trending, and the writers of the internet are busy creating the forthcoming "Reputation" album’s murder board: suspicious design elements, a portentous drop date and other evidence of the latest vast Big Machine conspiracy. But enthusiasm for the pageantry feels tepid — rote even — maybe because while Taylor Swift went into hiding [insert tortured metaphor about shedding skins here] we have been forced to move on to parsing the bizarre and frighteningly relevant actions, on social media and in physical space, of a new cast of blonde supervillains.

There’s Ivanka Trump, of course, whose continued affirmation of her father’s presidency in spite of his vocal support of the people who see her, her husband and her children as subhuman, is more confounding and engrossing than any celebrity feud over backup dancers or diss tracks or third-party recording laws could ever be. Ivanka is only a Taylor Swift-level social media manipulator in her own mind, though. See how she counters criticism over her complicity with a staged photo of herself reading thank-you cards ostensibly created by actual children for her, for some inexplicable reason. Yet, the parallels are all there: self-promotion thinly disguised as feminism, odious displays of faux humility, ruthless manipulation of a “good girl” image and a dogged refusal to commit publicly to a political truth.

And so former Dirty Projectors guitarist and vocalist Amber Coffman's brilliant savaging of Ivanka in her "Ivanka Del Rey" video, singing Ivanka's own words spliced together, in a languorous Lana Del Rey style, to form the scathing indictment of her father that Ivanka's too cowardly to ever issue, feels satisfying in a way that no Swiftian machinated feud with a fellow A-lister ever could. The difference? Ivanka’s poses and positions — and even her self-owns — have stakes. She’s in the White House and Swift’s on the bleachers.

But this week’s breakout star is Treasury Secretary Steve Mnunchin’s wannabe actress wife Louise Linton, whose outrageous Instagram bragging and subsequent Mean Girl lash-out gave us a shiny, well-groomed focal point for our collective rage against the gilded hollows of the Trump administration. If Taylor Swift was the symbol of a superficially divided 2015 pop culture landscape, Linton is the plastic bride atop the cake in this year of Red Weddings. Suddenly, ideas of who Swift will take to the VMAs for her moment of Crystal Light triumph pulls a very distant second to the sinister meaning of the image of Linton and Mnuchin, on a taxpayer-funded trip to discuss tax reform, standing on a pile of gold to watch Monday’s eclipse.

So many words have been written on Taylor Swift's brilliance, ignorance, authenticity, shams. Here are a few more, shouted into the void. The old Taylor is waiting by the phone for us to tell us she's dead. Meanwhile, we've moved on: another day, another trauma.