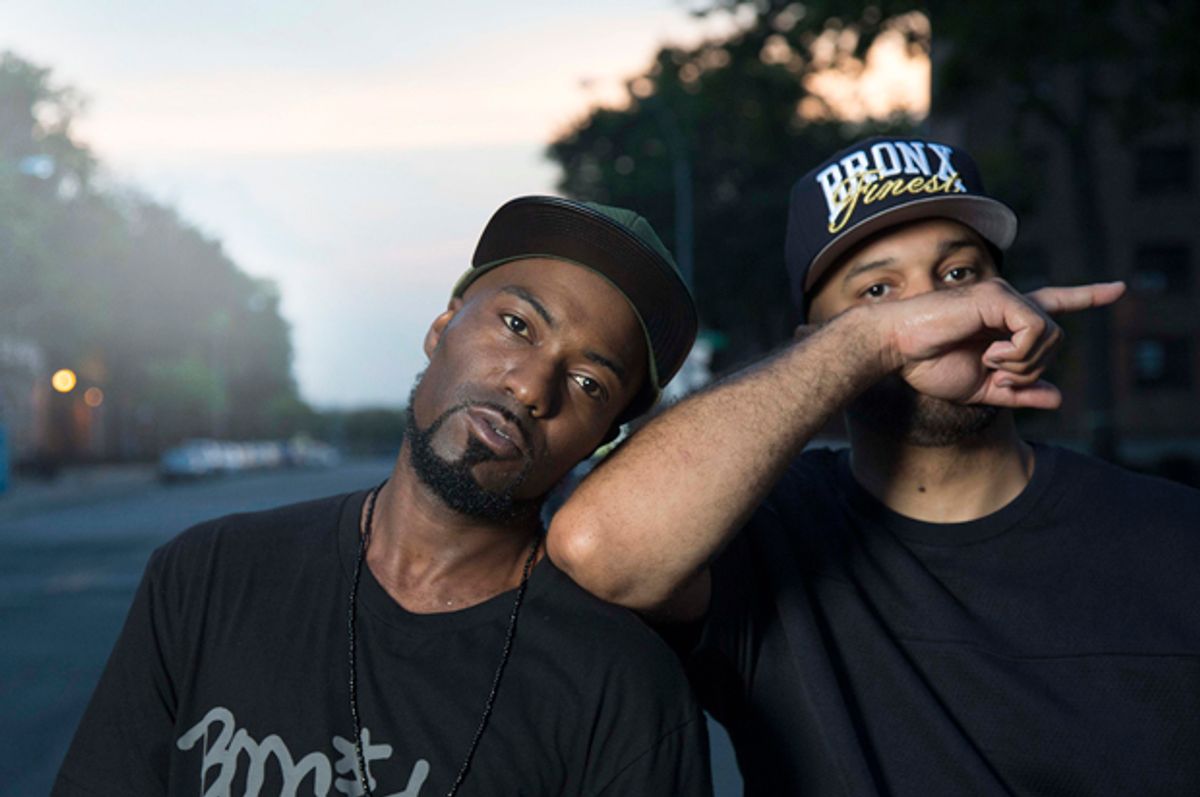 Everything about the "Desus & Mero" show is a sharp right turn from anything else you'll find out there in the world of late night.

Desus, real name name Daniel Baker, and Mero, real name Joel Martinez, tape the series in a conference room in the VICE's Brooklyn office. The hosts sit at a heavily graffitied table with prayer candles that frame them. There's a large stuffed bear behind them, adorned in a New York Yankees fitted cap and wheat-colored timberland boots, a nod to a style, culture and perspective Desus and Mero embody.

Guests of the "Desus & Mero" show sit awkwardly between the two hosts, fielding questions and jokes from the right and left. It's a unique a ping-pong format that Desus and Mero have pioneered and perfected in the short time the show as been on the air.

In less than a year, the comedic duo has taped 150 episodes and counting for Viceland, and interviewed some of the most formidable voices in the current political and cultural terrain: Diddy, Chris Hayes, Janet Mock, Joy Reid, Malcolm Gladwell, Issa Rae, Soledad O’Brien, Jesse Williams, Whoopi Goldberg, DeRay Mckesson and Larry Wilmore to name just a few. Just a few months in, Desus and Mero are joining that wave of voices as go-tos for not only comedy, but commentary.

On Monday, Viceland announced that "Desus & Mero" will be renewed for season 2, which is not surprising. After all, there's nothing quite like it out there. It's a refreshing take on and alternative to the familiar late-night blueprint from two Bronx natives unfiltered in their political commentary and totally original in their interview style. It's also the only show of its kind entrenched in the now-dominant musical, visual and conversational culture of America today: hip-hop.

For example, one night last February, the hosts shifted seamlessly between discussing former press secretary Sean Spicer and rapper Future, before introducing the evening's guest, MSNBC's Rachel Maddow ("our girl R-Dow," as Desus called her). The humor then, as almost always, was blunt, conversational, hilarious and fully, bitingly perceptive.

Desus and Mero first met in high school in the Bronx, but later reconnected on Twitter. They officially entered the web-comedy world in December 2013, when Complex TV launched the podcast and web series "Desus vs. Mero." The weekly show ran for a year before the comics appeared for a brief stint on various MTV comedy shows. But it was through their ongoing, live-recorded podcast "Bodega Boys" that their fans multiplied and their personas elevated. (Desus and Mero's diehard fans even have their own name: the "Bodega Hive.")

It seemed a sure fit when Viceland announced it would be producing a "Desus & Mero" TV show last year. Since the premiere of the first episode in October 2016, their shared star has only risen.

And yet, as obvious a choice as it may have been for Viceland, the news of a season 2 pickup is significant. Desus, the son of Jamaican immigrant parents, and Mero, born of Dominican parents, bring often unheard perspectives and voices to a genre almost completely dominated by white men. They also vehemently hold President Donald Trump and his administration accountable in ways that other late-night hosts seem scared to do.

After Charlottesville and Trump's placing blame on "both sides" and calling some of the white supremacists "very fine people," Desus responded accordingly: "Hey, do you guys have any friends that are unemployed? Because I know of a job opening. It's at the White House." He continued, "because we don't have a real president. We have a white supremacist in office."

Somehow, Desus and Mero have found the middle ground between summarizing and commenting on a wide range of political issues while using niche anecdotes, jokes and language that is rooted in their Bronx upbringing — a fine balancing act. Perhaps most impressively, they've gotten a growing audience to care about all these things at the same time.

"We’re the neglected children of New York City. That comes through in everything we do," Mero told The Fader. In the same interview, Desus said, "being from the Bronx, you know life is cheap. So you’re able to apply that to when you see ISIS videos and other people are like, 'Yo, ISIS is out here chopping heads off. But for me it’s like, I could get my head chopped off at three in the morning in front of the bodega."

There are few rules on "Desus & Mero," but for sure, no one is allowed to disrespect the Knicks or the Bronx. Also, the comedians are only allowed to say "fuck" five times per show (which is five more than most late-night hosts). Pretty much everything else — race, culture, sex, music, weed, bears in sports apparel — is on the table. Weeknights Monday through Thursday at 11 p.m., they prove it.

More than merely groundbreaking, the continued success of "Desus & Mero" is a challenge, one that demands that producers and executives move the creative, witty, piercing conversations seen in realtime on Twitter from our iPhones to our TV screens. It's something that rarely happens, but "Desus & Mero" makes it look necessary (and makes today's conventional late-night lineup seem like a thing of the past).

As the hosts once told a room full of advertisers and buyers in perhaps the best explanation of why people watch the show religiously, "We’re funny . . . and the other late night shows are corny AF.”