Donald Trump is right (about something): There really is an "alt-left," but it's even weirder than he thinks 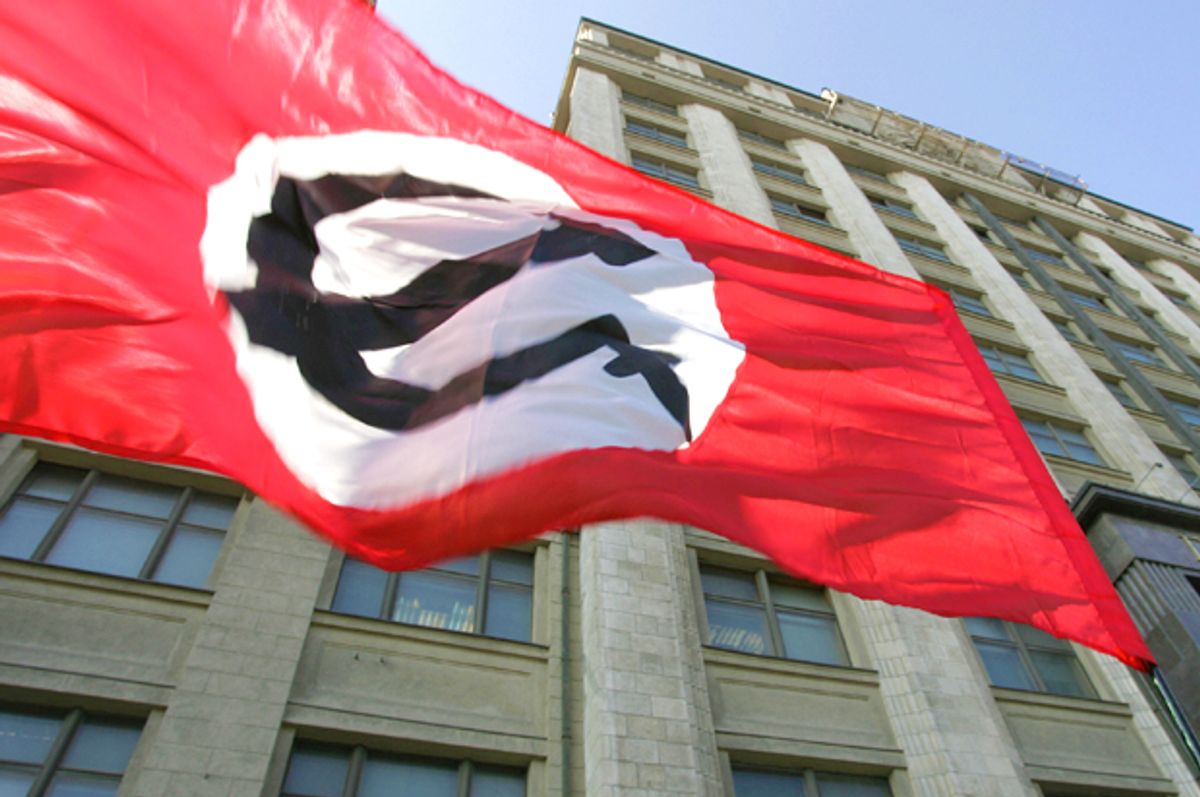 As public awareness of the collection of neo-fascists who call themselves the “alt-right” has increased, some within the Republican right concocted the term “alt-left” in order to deflect attention from the growth of racism that is the inevitable product of the GOP’s decades-long reliance on white identity politics to promote upward economic redistribution of wealth.

At the same time, many Republicans have pretended that the term “alt-right” had no meaning and was really just a fabrication by Democrats. It’s a classic case of political projection.

President Donald Trump has been particularly fond of both techniques. He has on multiple occasions pretended that “alt-right” was a meaningless slur -- acting as if he'd never heard the term, or had no idea what it meant -- while also implying that anti-fascist activists really were the “alt-left.”

On Aug. 25 of last year, as the 2016 Republican presidential nominee, Trump waxed downright postmodern during a CNN interview when asked about Hillary Clinton's suggestion that he was too close to the alt-right. He appears to have made up the word “alt-left” on the spot.

“Nobody even knows what it is,” Trump told CNN's Anderson Cooper, referring to the alt-right. “This is a term that was just given that — frankly, there's no alt-right or alt-left. All I'm embracing is common sense.”

A few days after that interview, Joseph Farah, the Christian nationalist founder of the conspiracy website WorldNetDaily, concocted a definition for Trump while accusing Clinton of engaging in political projection. According to Farah, it was Democrats who actually hated racial minorities, an argument so laughable it is routinely mocked even by alt-right activists. They have their own slang term for it: DR3, short for "Democrats R the Real Racists."

Have you ever noticed how some people accuse others of doing what they themselves do?

Whatever the “Alt Right” might be, it’s politically irrelevant compared with what we’ll call the “Alt Left.”

It’s a movement of phony self-righteousness and “compassion” that it uses to gain power. It will do anything and say anything to achieve its goal of hammerlock control not only of government, but every significant cultural institution -- from schools, universities and the press to churches, foundations, Hollywood and unions.

It has created a self-funding mechanism that includes a club of guilt-ridden billionaires who insulate themselves from attack by donating to the “Alt Left” causes. It also uses shakedown tactics to intimidate cowering corporations into doing its political and cultural bidding.

And here’s the kicker: It’s racist to the core!

Other conservative commentators like Fox News host Sean Hannity soon followed suit with their own proprietary definitions of the “alt-left.” Soon, Trump sycophants seemed to have settled upon that term as a synonym for "partisan Democrat," as the Washington Post’s Aaron Blake noted in December.

As Trump, Hannity and other GOP hacks started throwing around the word “alt-left,” some liberal commentators who favored Clinton over her insurgent rival Sen. Bernie Sanders started using the word as well. Among them was Nation columnist and former Salon editor Joan Walsh:

Another was MSNBC host Joy Reid:

As Sarah Jones documented extensively last week, Clinton loyalists have continued their usage of the term as a cudgel against those further to their left.

As moderate Democrats have stuck with their usage of “alt-left,” Republicans seem to have adopted it. Once Trump was sworn in as president, conservatives started using it as a synonym for various "black bloc" or “antifa” groups who frequently oppose white nationalists at their public rallies or other events.

“When you say the alt-right, define alt-right to me. You define it,” Trump asked when a reporter tried to ask him about the neo-fascist movement.

Referring to allegations that various counter-demonstrators initiated physical confrontation with the white nationalist protesters (there is little or no evidence for this claim), Trump claimed it was the “alt-left” that had started the violence.

Overall, most people who use the term “alt-left” seem to employ it as a rhetorical weapon against their political opponents. But believe it or not, there are some people who have actively adopted the term. Since this is the age of the internet, they have a website that's been around since 2015, advocating a form of white nationalism mixed with left-wing economics. As “Rabbit,” the pseudonymous creator of the site makes clear in both his prose and tweets, this movement is probably closer in spirit to the actual alt-right.

Seriously though, who are the AltLeft anyway? Who are we? I would say that the majority are white people who hold a lot of typically leftist views on economics, the environment and some social issues, yet at some point realized the new left had become hostile to any white person even slightly reluctant to act as a scapegoat for everybody else’s problems. No self respecting white person would want to be associated with a movement that trashes their heroes, their culture, their history, denies their achievements … a movement which seeks to destroy their civilization and erases their identity. Hell, besides all that, a lot of “cultural marxism” (or whatever) has become so freaky that most normal white feminists and gays are probably weirded out by it.

My own journey was a bit different. I was mostly a Nixonian sort of republican for much of my young adult life. As an irreligious person living mostly in artsy metropolitan areas, I identified more with the culture of the left, while always privately retaining a racial awareness (which would come out occasionally at peak triggering) and a low tolerance for hippie bullshit. I became disillusioned with unfettered capitalism through real world experiences watching corporations and brands in action, the way they had loyalty to nothing and prioritized profits over absolutely everything: including quality, aesthetic, even people’s lives. The creepy cult-like way they manipulate and motivate people. So at a certain point I began to think of myself more as AltLeft than AltRight.

Terms such as left and right seem obsolete in this day and age. The true divisions are between nationalists and internationalists, as well as pro-whites and anti-whites, identitarians vs multiculturalists etc. What we find though in reality is that these words are deeply ingrained. Anyone who spends time in a political movement with “right” in the title will soon discover it’s difficult to divorce it from organized religion, traditionalism and sexual puritanism. What better way to repel certain types and prevent entryism from them than by partially identifying with a label they already don’t like? Out of these groups forming, something of a coalition can emerge. The AltLeft exists in that small space where Ralph Nader and Pat Buchanan begin to meet. It’s that point in time where Mussolini ditched marxism and moved toward fascism. The question is, can the AltLeft be divorced from political correctness and white ethnomasochism? My guess is that it can, with the help of enough problematic language to scare the cucks away and create a safe space for leftist shitlords to don their greenshirts and appear in full force.

Given that almost no one besides "Rabbit" willingly affixes the "alt-left" label to themselves, it's pretty clear that in the U.S., there isn't much of a market for socialist-flavored white nationalism. But in the multi-party systems that are common in Europe, such a thing has existed for quite some time since the early years of the Nazi Party when Adolf Hitler was trying to rise to power. At that point, he was willing to accommodate disgruntled left-wingers by portraying himself as a socialist. The technique was remarked upon by the German left in a magazine cartoon which showed how Hitler would emphasize different portions of his faction's name, the National Socialist German Workers Party, depending upon who his audience was. The illustration below is in German but pretty much any English speaker can understand the point: There was an entire socialist-aligned faction of the Nazi party led by the brothers Gregor and Otto Strasser. Once Hitler had taken control of Germany, however, he proceeded to execute Gregor Strasser and his ally Ernst Röhm during the infamous "Night of the Long Knives." With power consolidated, Hitler reverted to a more corporatist form of fascism that banned trade unions and made belonging to communist and socialist parties a crime for which someone could be sent to a concentration camp.

Vestiges of the original "Strasserist" movement continue to this day in Russia in the form of "National Bolshevism," a movement within that country to return to an imperialist form of communism that is explicitly anti-Western. (Lenin and Trotsky would have perceived "National Bolshevism" as an oxymoron; Joseph Stalin, perhaps less so.) One of its biggest proponents is Aleksandr Dugin, a political theorist who is said to have close ties to Russian President Vladimir Putin.

The bottom line of all of this? Unless you're trying to describe a left-wing fascist, you probably should not be throwing around the term "alt-left."