The Philippine labor movement is beginning to turn against authoritarian rule

Mass incarceration, extrajudicial killings and rampant police-led brutality continue on as a "war on the poor." 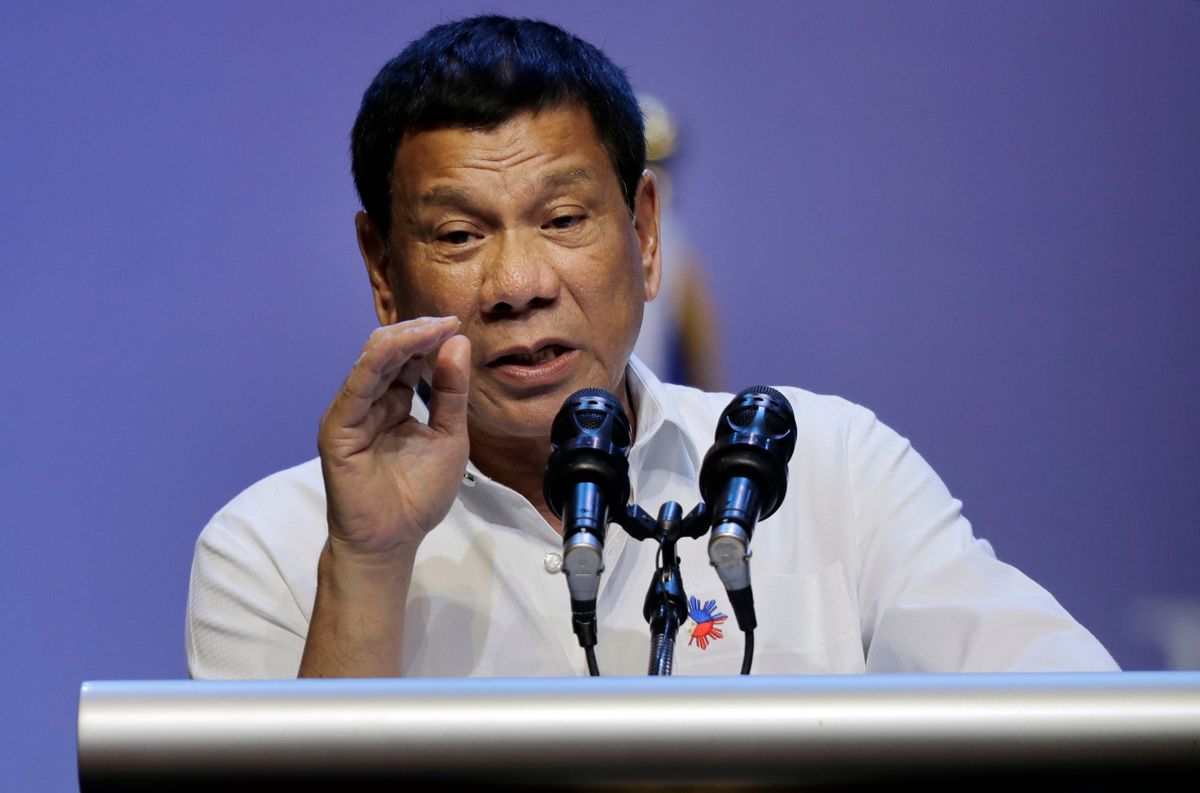 The people of Manila have always struggled to survive day to day, but now they're cheating death every night. The vices and bandits that usually roam the streets are being eclipsed by a crueler menace: the foot soldiers of President Rodrigo Duterte’s authoritarian regime.

This week, Duterte brought another summer nightmare to the region, with 32 “drug personalities” slaughtered in 67 police operations, deployed in a series of raids on the provincial outskirts of the city.  The massacre capped a year of thousands of killings in a hyper-militarized drug war, which seems to be growing bolder following Duterte’s recent expansion of military rule.

The formal imposition of martial law has shown that much of the president's working-class base remains loyal. Banking on promises of stability and development, many are still lured by the political deal he proudly campaigned on — trading democracy for “law and order” — even as his administration robs them of both. His brazen populism and incendiary rhetoric is now undermining the labor movement that helped bring him to power, as the government continues to fail to protect workers from exploitation.

But dissent is brewing among some allies on the left, who have supported him since his days as a renegade mayor of Davao. Late last month, the left-wing Kilusang Mayo Uno (KMU) Labor Center set up a street encampment to protest martial law and demand labor reforms.

“Poverty, hunger and oppression among workers have worsened under Duterte’s continued promotion of cheap, contractual and repressed labor,” the group declared in its July 24 manifesto, denouncing the president’s economic policy as “subservient to the neoliberal dictates of the U.S. and China.”

Breaking from labor's general tolerance of Duterte's hardline tactics, the group contended that martial law was “merely being used to curtail civil liberties and suppress workers’ and people’s legitimate demands and struggles.” At the same time, the military crackdown on a rebellion on Mindanao island, Duterte's home region and long a site of communal conflict, “has served as a threat to other workers asserting their demands for regular jobs and living wages,” they write.

The chaos that Duterte generates is providing justification for bludgeoning the insurgency and tightening his grip on the urban core. Capitalizing on a strongman persona, his scorched-earth policing agenda has led to mass imprisonment and extrajudicial slaughter with virtually no due process, according to internationalhuman rights authorities.

But disillusionment with Duterte's image as a “voice of the people” is spreading among the rank-and-file. Old labor alliances have bristled at the Labor Ministry's ongoing failure to address systematic abuses of worker rights, neglect of longstanding union demands for stronger regulation of subcontracting and refusal to implement meaningful land reform. With an estimated 24 million irregular contract workers nationwide, girded by a highly unequal tiered wage structure, unemployment and social disenfranchisement fester amid state oppression and neoliberal free markets.

The parallels between Duterte's reign of terror and Trumpism go beyond the optics of nationalist bravado and vulgar soundbites. Both figures have mastered the art of manipulating media and social anxieties to distract the public from the root causes of social dysfunction.

In reality, political insurrection from militants on the country's marginalized outskirts, along with the war on drugs, both reflect the abysmal social inequality and deprivation that his regime has inherited and perpetuated. The chief victims of Duterte’s drug wars, after all, are the jobless, disenfranchised youth who have been trapped for generations in a maelstrom of corruption and exploitation. Yet mass incarceration, extrajudicial killings and rampant police-led brutality continue in a crackdown that rights advocates have condemned as a “war on the poor.”

Amnesty International observed in February that police-led and vigilante street violence “have overwhelmingly hit the urban poor. And the police and paid killers have built an economy off extrajudicial executions. Witnesses and family members repeatedly told us how the police stole money and other valuables from their homes, and wedding rings off the fingers of the deceased.”

The police and vigilante aggression unleashed by Duterte’s anti-crime campaigns, now steeled by  martial law in Mindanao, has provoked tense backlash from faith groups and human rights advocates who fear a return to the dictatorship days under Marcos. An opposition prosecutor has even tried to get Duterte charged at The Hague, apparently with little impact on domestic politics. But Duterte’s grip on civil society will only be broken when he loses the faith of his working-class followers, the vast majority of whom support his drug war policies, although most express concern aboutextrajudicial murder impacting them or someone they know.

Nonetheless, militant workers might be crystallizing a grassroots opposition.

Following the protest camp action in late July, KMU Chair Elmer Labog stated via email that the campaign was one of several mass uprisings across the country that month, largely driven by frustration with dismal wages, the exploitation of precarious subcontracted workers and pervasive state violence under martial law.

Labog, nonetheless, acknowledges the challenges of organizing under authoritarianism, arguing: “Once again these are dangerous times for organizers and mass leaders, but we had survived the worst attacks under Marcosian rule. We have learned a lot from our experiences during those dark days under martial law.” While some “yellow unions” are still standing by Duterte, Labog notes, “They would eventually be isolated by supporting anti-people and anti-worker policies of the U.S.-Duterte regime.”

Partido Manggagawa, a labor-left opposition party, expressed solidarity with KMU’s protest camp, but also pointed out that KMU remains somewhat compromised—indirectly tied to the regime through key cabinet posts held by party affiliates “who are serving in Duterte's cabinet have not resigned, so there is an ambivalence.”

Partido Manggagawa, meanwhile, has joined a national federation of leftist labor groups, Nagkaisa, to sign a collective opposition statement to Duterte’s oppressive policies. The coalition linked the fate of working people to the need to disinvest in violent and repressive institutions, and to focus instead on social remedies that actually raise the quality of life, rather than fuel more bloodshed. At the heart of labor’s demands are issues of basic welfare: fair taxation of the rich, stable family-supporting jobs and rehabilitation for youth and communities trapped in the drug crisis.

The group cautioned, “It will be very unproductive [for Duterte] to spend his remaining years in office for this costly war.  War is both destruction and political distraction. It neither creates nor equally redistributes social wealth that is now concentrated in the hands of oligarchs.”

The statement also denounced regime's militarization of society when there was “a better war to wage and win against contractualization, low wages and high prices of basic goods and services. If you want peace, Mr. President, build social justice and economic inclusion first.”

Echoing a long legacy of oppressive administrations, Duterte has built power by aggravating social divisions. Finding common ground among all the communities under his grip, however, can sow real populism — if a critical mass can rise again against authoritarian rule.