Trump's misunderstanding of the past presents serious questions about our future 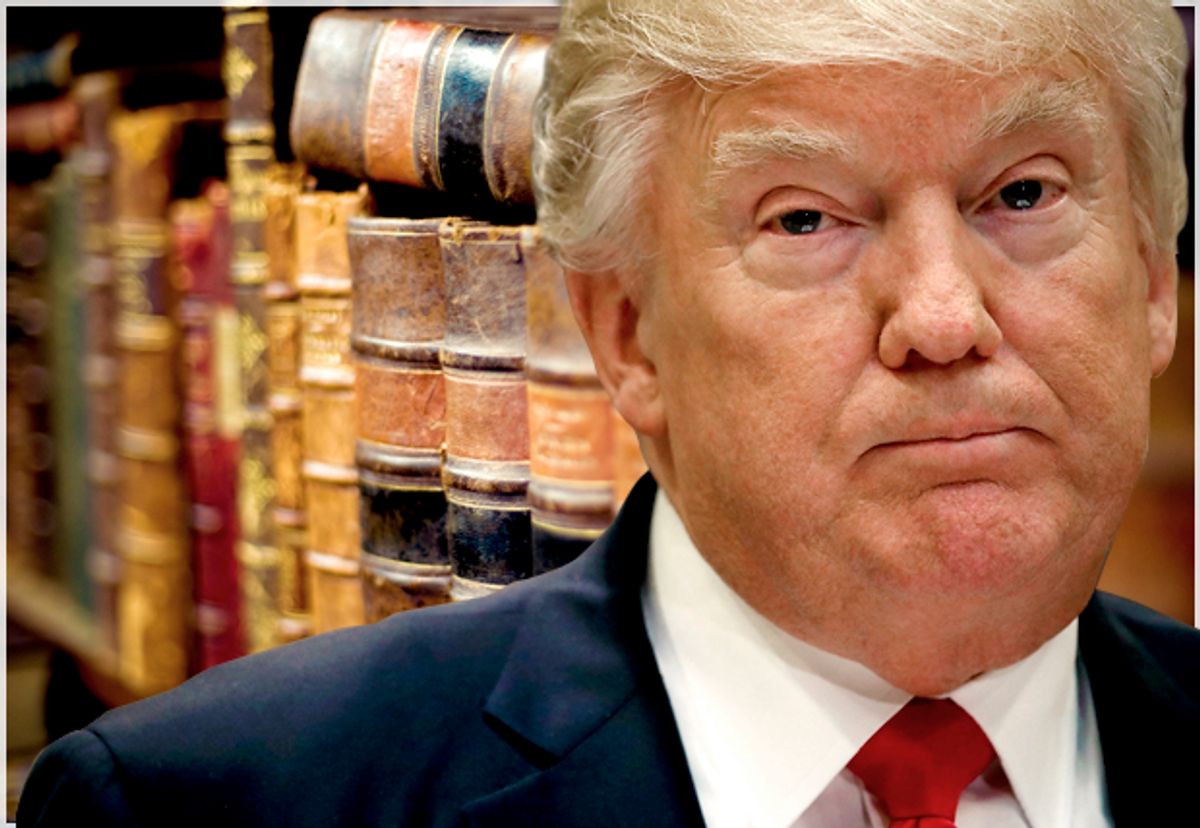 If Charlottesville proved one thing for certain, it's that President Donald Trump is not only out of touch with reality, but almost completely ignorant of U.S. history.

Since taking the oath of office, he's popped out uncountable gaffes via speeches and Twitter, but has suffered virtually zero substantial political consequences of his various mishaps, misstatements or moments of historical illiteracy that would have likely resulted in some form of backlash for run-of-the-mill Washington politicians.

It's time to put an end to this exception and take a look at some of Trump's biggest historical blunders only since taking office.

That time he asked, "why was there the Civil War?"

Remember when the president asked that question and somehow followed it up with an even more ridiculous one?

He added, "He was a very tough person but he had a big heart, and he was really angry that he saw what was happening with regard to the Civil War. He said there’s no reason for this." Jackson, a pro-slavery imperialist, would have likely put him on the wrong side of the conflict (and justice for that matter). Was Trump saying that Jackson would have "worked out" the slavery debate such that abolitionism lost? Would he even understand that question? Unclear.

Just a few days ago, I wrote an article about the president being presented with pictures of Afghan women from the 1970s in which they were wearing short skirts. Reportedly, it helped influence his decision to contribute additional troops to America's longest war. It's difficult to overstate just how limited this makes Trump's knowledge of Afghanistan look — does he really think that deploying more troops to the country will magically result in some sort of Democracy-establishing, mini-skirt supplying liberalization of the country?

Now, liberal foreign interventionism is by no means unique to Trump, nor is the counterintuitive strategy of incessant bombing campaigns that result in large swaths of civilian deaths. Though there has been a major uptick in civilian deaths since he's taken office, and it's certainly not going to improve situations on the ground for Afghan citizens. His hollow, yet bombastic address earlier this week in which he announced the deployment of more troops (deliberately leaving out specific numbers) was indicative that not much is likely to change in Afghanistan.

That time he implied Frederick Douglass was alive

First off, I can't even fathom the subheadline I just wrote. But to kick off Black History Month this past February, Trump evidently had absolutely no clue as to who Douglass was. "Frederick Doug — Douglass is an example of somebody who’s done an amazing job and is being recognized more and more, I notice."

This is the sort of thing you say about someone when you know you’re supposed to say something positive about them but you don’t know what it is. Douglass, a titanic figure in American history, whose name is synonymous with equal rights and the abolitionist movement, has done “an amazing job,” said the president of the United States. The details of the job he’s done are unimportant; it was an amazing job, and that’s all that matters.

All the times he repeated the General Perishing blood libel

On numerous occasions Trump has mentioned a tale of U.S. General John J. Pershing that has never been able to be proven true, but that doesn't matter to Trump so he tweeted about it again last week.

"Study what General Pershing of the United States did to terrorists when caught. There was no more Radical Islamic Terror for 35 years!" he tweeted. Except there is zero evidence of the story which he is referencing. Variations have included Pershing dipping 50 bullets in pigs blood and ordering his men to shoot 49 of the lined up insurgents to death and then telling the 50th to spread the word to instill fear in others. But it's certainly scary that the man in charge of the world's most powerful military (which has a very recent history of secretive torture) would even share a story of that nature. However, it gives some important insight, and perhaps provides some chilling foreshadowing.

That time he said Koreans thought Colonial architecture was futuristic

It's unclear what the president was even getting at when he pretended to know about the history of the Korean Peninsula and its historical relationship with China, but like always, he carried on. "And you know, don’t forget, China, over the many years, has been at war with Korea — you know, wars with Korea," he said.

This is coming from a man whose name is emblazoned across a new, high-rise condo tower in downtown Seoul, so . . . It also comes from the same guy who spent just about week in a pissing contest with North Korean leader Kim Jon-un about who could rain more fire on the opposing leader's country. Scary stuff.

That whole "many sides" business

Without a doubt, Trump's assessment of what occurred in Charlottesville on the night of August 11 that seeped into a so-called rally on August 12 may have been Trump at his worst — at least so far.

"Yes, I think there’s blame on both sides," Trump said, doubling down on his first remarks during a hostile press conference in Trump Tower.

But the president has to this day not made an effort to separate himself from the former leader of the Ku Klux Klan. For a man that built his empire off of his own name, it's beyond comprehension that he wouldn't categorically disavow any association with David Duke, who insisted the purpose of the rally was to fulfill the promises of the president. Instead during his rally in Phoenix, Arizona this past week, Trump conveniently omitted the fact that he repeatedly, unmistakably, unapologetically blamed both sides.

Trump doesn't know much history, that much is obvious. He also doesn't care to learn more about it because it doesn't apply to him. It never has, and it probably never will. It's easy — and maybe necessary — to see these historical blunders as something more than just simple intellectual fails: They're the drippings of a primitive mind that sees no value, and no truth, outside of itself.