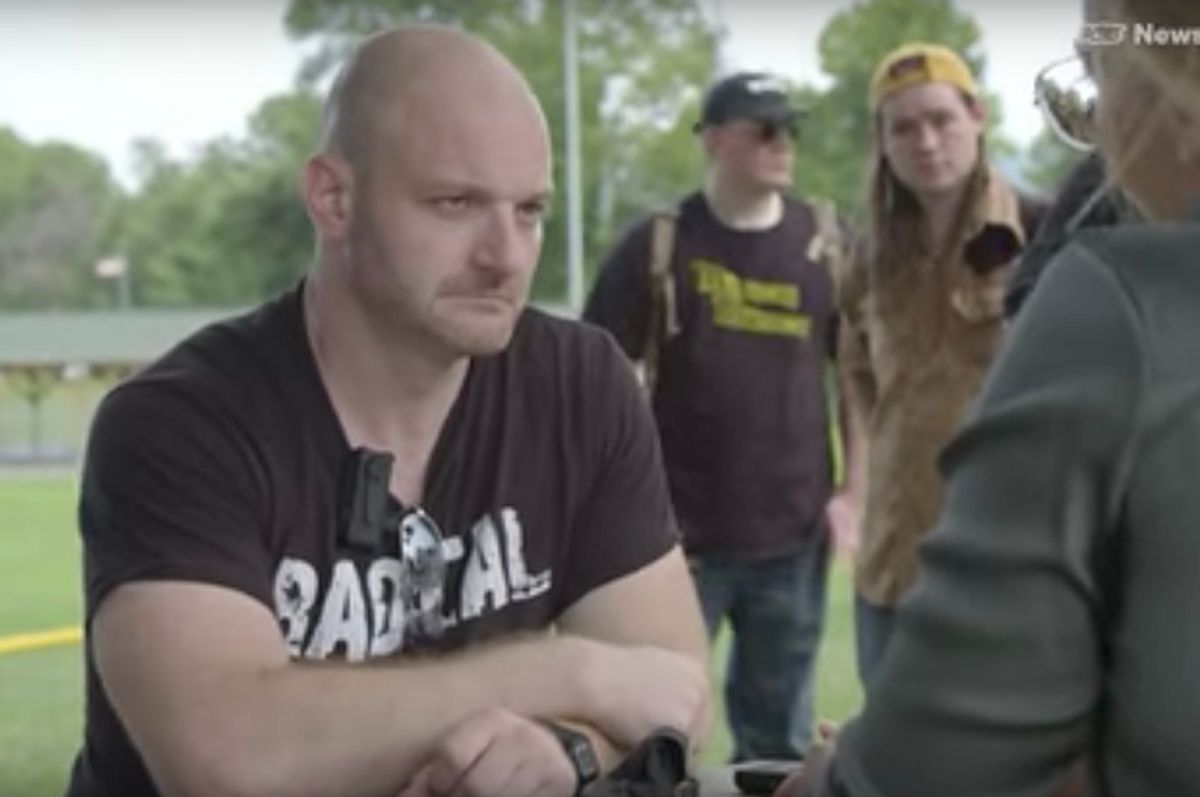 One of the more curious trends of the 2016 election campaign was the tendency among many young libertarians to jump onto the Donald Trump bandwagon. As Salon's Heather Digby Parton recently discussed, some more conscientious libertarians have begun to confront this problem directly.

At first glance, Donald Trump hardly seemed like a candidate that committed libertarians would even consider voting for, let alone support enthusiastically. On paper, the best Republican candidate for libertarian voters was no doubt Sen. Rand Paul of Kentucky, the son of libertarian icon Ron Paul. Like his father, he advocated a free-market fundamentalist worldview that was sharply critical of big government and American interventionism. By contrast, Trump built his campaign on xenophobic rhetoric, authoritarian posturing and anti-free-trade diatribes. If there was one candidate who seemed sure to be rejected by libertarians, it was Donald Trump.

Yet, the opposite happened. While certain libertarians did support Rand Paul’s unsuccessful candidacy, countless others became diehard Trump supporters and went on to shape what is today known as the “alt-right.”

In an insightful article for The Washington Post last year, Matthew Sheffield (now a Salon reporter) examined this trend and provided important historical context that sheds some light on Trump’s appeal to a certain subset of libertarians. According to Sheffield, it was the libertarian movement — or, more accurately, the "paleo-libertarian" movement long associated with Ron Paul — that paved the way for Trump’s racialized rhetoric.

“Formally, Sen. Rand Paul (R-Ky.) may be his father’s political heir,” Sheffield wrote. “But there’s no question that the paranoid and semi-racialist mien frequently favored by Trump originates in the fevered swamps that the elder Paul dwelled in for decades.” Sheffield traced the paleo-libertarian movement — which is essentially a merging of free-market fundamentalism and far-right cultural populism — back to the “anarcho-capitalist” economist Murray Rothbard, who is famous for, among other things, advocating child labor and claiming that parents should have the legal right “not to feed [their] child [and] allow it to die.” Rothbard was a co-founder of the Koch-funded think tank Cato Institute, and later the Ludwig von Mises Institute, which “enabled the fledgling [libertarian] movement to establish affinity with the neo-Confederate Lost Cause movement.”

“To solve the problem that few Americans are interested in small government,” Sheffield explained, “Rothbard argued that libertarians needed to align themselves with people they might not like much in order to expand their numbers.” These people included Evangelical Christians and neo-Confederates (i.e., white supremacists) who despised the federal government — especially after it stepped in to defend the civil rights of oppressed African-Americans in the South during the 1960s.

Paleo-libertarianism was, in other words, a thoroughly reactionary ideology that combined the very worst aspects of both libertarianism and right-wing populism. This makes it distinct from the broader libertarian movement, which tends to be more socially liberal or at least socially tolerant. The "alt-right" was an outgrowth of this unholy alliance.

This becomes clear when looking into the biographies of top figures on the "alt-right," such as Richard Spencer, the neo-Nazi who coined the term “alt-right.” Before becoming a full-fledged white supremacist leading “hail Trump” rallies, Spencer was a fan of Ron Paul and hosted the then-congressman at an event for his Robert Taft Club in 2007 (courtesy of CSPAN). Another leader of the “Unite the Right” rally in Charlottesville earlier this month was Mike Peinovich (aka Mike Enoch), a white supremacist podcaster and blogger who marched alongside David Duke. Like Spencer, he also ran in libertarian circles and supported Paul before embracing his inner racist during the 2016 election.

The list goes on and on, but there is one particularly notorious individual who is worth looking at in more detail. This is Christopher Cantwell, the overtly fascist star of Vice News’ widely-viewed documentary on the Charlottesville protests, who became the most infamous man in America following the tragedy in Virginia (and the most mocked after posting a teary-eyed video online and getting banned from OkCupid). At this point it should surprise no one that Cantwell, like many of his fellow white supremacists in the "alt-right," started out as a libertarian.

In fact, Cantwell still considers himself to be “foundationally" a libertarian. In a March interview on YouTube, the white supremacist said that he is a libertarian at heart and believes that “everything should be done through property rights and contracts.” He came to the conclusion, however, that “the idea that most of the people we live around today would be property owners in the absence of the state is hysterically, obnoxiously stupid.”

“Those people are not fit for survival in the absence of the state,” continued Cantwell. “So I don’t argue with people who call me a fascist anymore, because essentially these people are products of the democratic state.”

Cantwell went on to advocate state-sponsored eugenics, and even genocidal mass murder: “Basically you have to start making better people in the society, and that might involve doing things like chucking trannies out of helicopters.”

Clearly Cantwell is a provocateur who exists on the fringe and delights in shocking the "normies." But the most extreme members of a political movement are often the most candid about their beliefs and goals, and one can learn a great deal about a movement or an ideology based on the characters that it attracts on its fringe. Cantwell’s deplorable comments provide an insight into the personalities who may be drawn to libertarian and/or fascist movements, which are both fundamentally reactionary and authoritarian (i.e., undemocratic).

A term that comes to mind when considering both libertarianism and fascism is "social Darwinism." Cantwell’s worldview is clearly driven by a pseudo-Darwinian perspective, and this is what initially drove him to libertarianism — an ideology that advocates the privatization of all areas of life. As Noam Chomsky has pointed out, this would inevitably lead to “private tyranny,” but in the libertarian mind it would unleash the invisible hand of the market and allow the fittest to thrive — or as Cantwell might put it, it would “start making better people in the society.”

This “survival of the fittest” mentality ended up driving Cantwell into outright fascism and white supremacy as he began espousing a pseudoscientific racialist worldview. Many of the white supremacists who marched in Charlottesville no doubt followed a similar path.

It has long been common knowledge that the libertarian movement in America is dominated by young white males. A 2013 survey from Public Religion Research Institute found that, compared to the general population, “libertarians are significantly more likely to be non-Hispanic white, male, and young.” Nearly all libertarians, the researchers write, “are non-Hispanic whites (94%), more than two-thirds (68%) are men, and more than 6-in-10 (62%) are under the age of 50.” It hardly needs to be pointed out that the "alt-right" is also overwhelmingly white, male and young.

What this reveals is that young white males are far more susceptible to reactionary thinking. This is not surprising in itself. The explicit (or implicit) aim of any reactionary movement or ideology is to restore society to some golden age of the past. Needless to say, it is much easier for white men to romanticize history than it is for women, people of color or LGBTQ people.

Over the past month, the "alt-right’s" fetishistic longing for the past has been on full display as shlubby white supremacists have left the comfort of their couches to protest the removal of Confederate statues. For these bigots, historical figures like Robert E. Lee and Jefferson Davis represent a better time, when white men recognized their true supremacy and dominated society.

Within the libertarian movement, there exists a similar nostalgia for the Gilded Age, when capital dominated over labor and the “free market” unleashed the Übermensch spirit. It goes without saying that only white men — and very few of them, one might add — did particularly well during this period.

Reactionary ideologues tend to picture themselves thriving in these idyllic epochs of history, although the chances are better that someone like Christopher Cantwell would have been a black lung-afflicted coal miner rather than a prosperous captain of industry in 1878.

Following the tragedy in Charlottesville earlier this month, arrest warrants were issued in Virginia for Cantwell, who is accused of the “illegal use of tear gas or other gases.” (He turned himself in to the police on Thursday and was denied bail.) He could face years in prison if convicted, where his “survival of the fittest” mentality will be put to the test. But many other impressionable young white men will continue to be indoctrinated by reactionary ideologies, whether it is libertarianism, white supremacy or both.

The evolutionary biologist Richard Dawkins — who is often wrongfully accused of advocating selfishness because of the title of his book “The Selfish Gene” — once stated in an interview that he is a “passionate anti-Darwinist when it involves the kind of society in which we want to live.” “A Darwinian state,” observed Dawkins, “would be a Fascist state.”

Young zealots like Cantwell who espoused libertarian dogma and supported Ron Paul five years ago have come to this realization as well, and have thus embraced fascism outright. When one grasps the social-Darwinian roots of both ideologies, this transformation begins to make sense.