Profiling erodes trust with immigrant communities, making them fearful to report crimes and cooperate with police 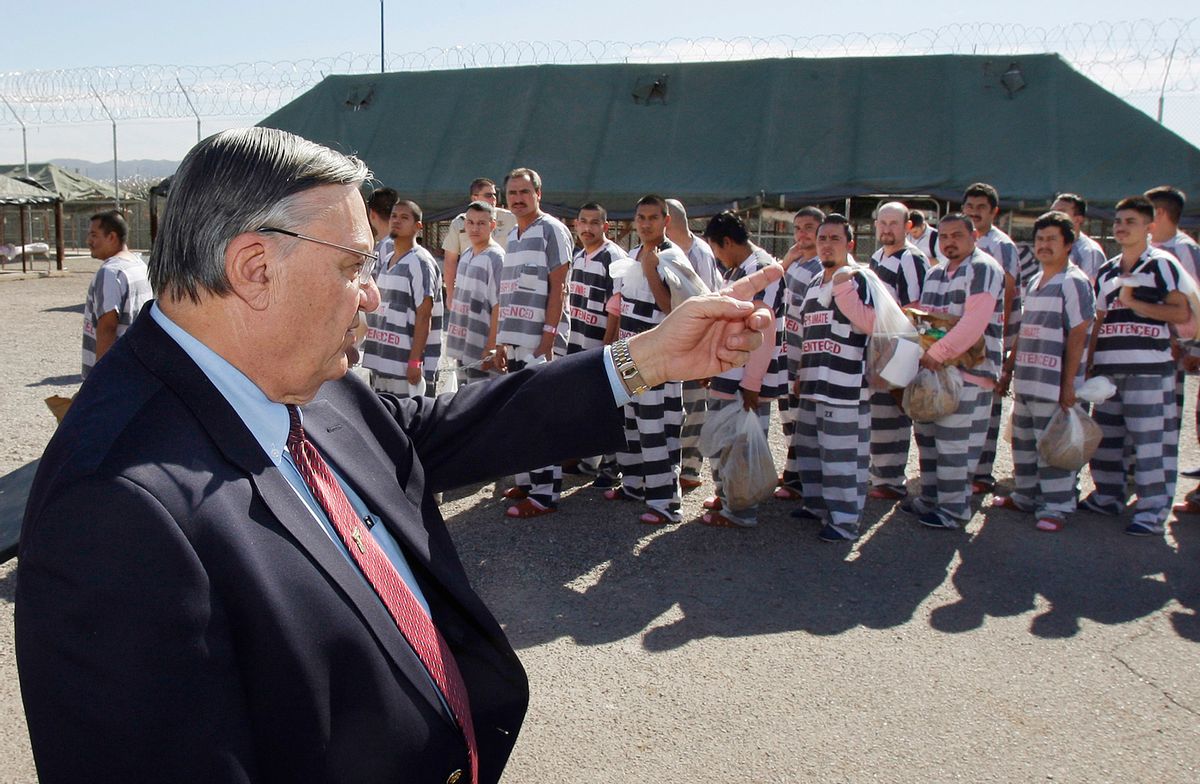 FILE - In this Feb. 4, 2009 file photo, Maricopa County Sheriff Joe Arpaio, left, orders approximately 200 convicted illegal immigrants handcuffed together and moved into a separate area of Tent City, for incarceration until their sentences are served and they are deported to their home countries, in Phoenix. Arpaio became a national political figure by taking on duties that none of his counterparts would ever touch, jailing inmates in tents, making them wear pink underwear, leading immigration crackdowns and investigating President Barack Obama's birth certificate. (AP Photo/Ross D. Franklin, File)
--

It’s true, Trump has the legal power to pardon pretty much anyone. But pardoning Arpaio could send the message that state and local officials can aggressively enforce federal immigration law, even if it risks racial profiling and violating the due process rights of citizens and noncitizens.

Arpaio has long been known for his harsh practices like requiring inmates to work on chain gangs and live in outdoor tent cities in the scorching Arizona heat. He prioritized immigration enforcement at the expense of crimes like sexual assault.

In 2011, a federal court found that Arpaio’s sheriff’s department unconstitutionally racially profiled Latinos. The court additionally noted that state and county officials had no authority to enforce federal immigration law without authorization from the federal government. Arpaio had no such authorization.

As a former federal prosecutor and Justice Department civil rights lawyer, I know that state and local cooperation can be helpful in enforcing federal law. But as I teach my constitutional law students, when it comes to immigration, federal law usually preempts state law. State overenforcement of immigration law can actually interfere with federal policy. So, state officials should enforce federal immigration law only where the federal government asks them to.

More fundamentally, no federal or state official can legally target people for immigration-related stops and questioning just because they look Latino. And as the Supreme Court has stated, even noncitizens have the right to due process and to be free from racial discrimination, as long as they are present in the U.S.

Arpaio’s detentions and questioning thus broke the law by violating individuals’ due process and Fourth Amendment rights to be free from unreasonable search and seizure. The court ordered Arpaio and his office to stop using race as a factor in its enforcement decisions. His deputies could detain individuals based on probable cause that they had violated some state law, but not merely because they suspected them of being in the U.S. illegally.

Consequences of a pardon

In July, another federal judge convicted Arpaio of criminal contempt for intentionally violating the first court’s prior orders. His sentencing hearing is set for this October.

It is unusual for a president to pardon someone before he or she is sentenced. Doing so would suggest that Trump felt Arpaio has done nothing wrong.

Arpaio’s pardon does not mean a complete clean slate for him. It would not erase a separate court ruling from 2016 that found him in civil contempt of court. Civil contempt is a noncriminal finding, which could require remedial measures like court-ordered reforms, reporting requirements and the like. These do not fall under the reach of the president’s pardon.

Nor does a pardon mean that he or his department would be allowed to return to their unconstitutional practices. Arpaio himself is now out of office, having lost his most recent election. And the Maricopa County Sheriff Department is still under a court order to refrain from racial profiling and other illegal immigration enforcement efforts. But the pardon could embolden immigration hawks and infuriate Trump’s opponents – which, in the end, might very well be the intention.