A growing number of Republican senators, says a GOP strategist, are ready to tell Trump, "Go f**k yourself" 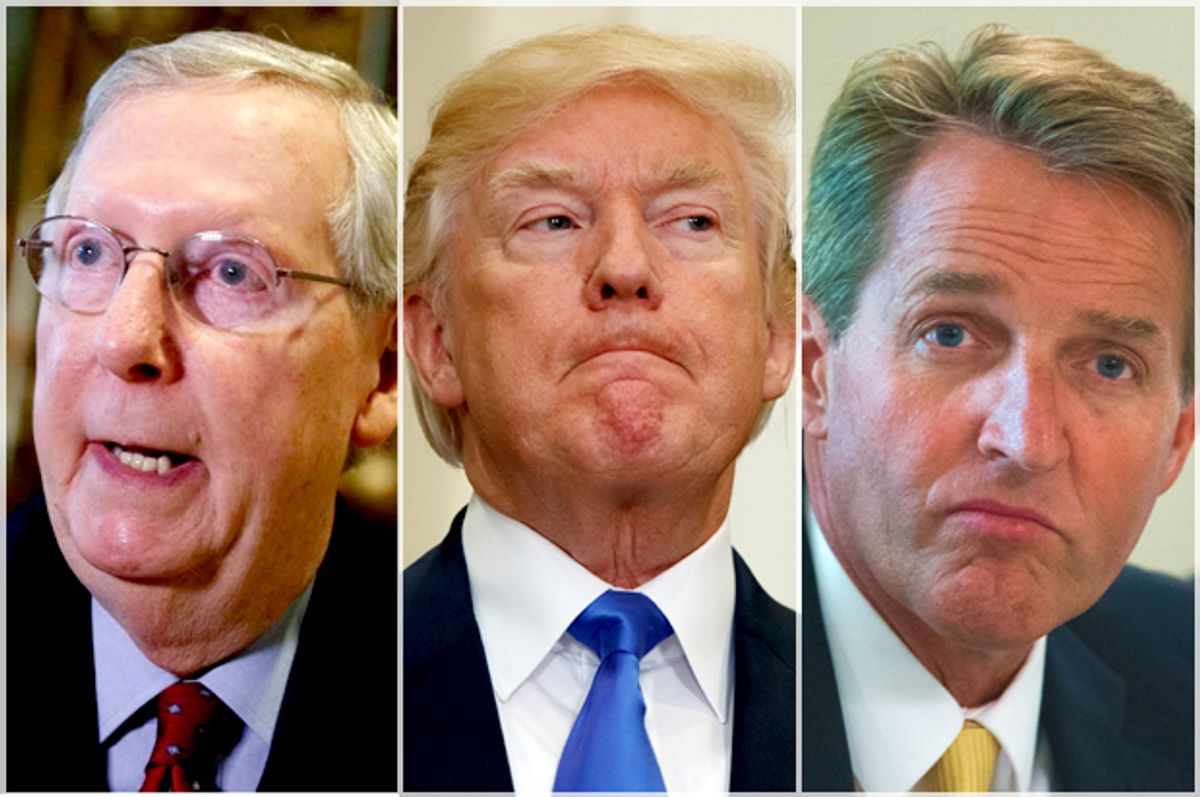 President Donald Trump is in a no-win situation, and it's all of his own making.

On Tuesday, while in Phoenix for his ambling, rambling rally, Trump met with two major Republicans, according to Politico: Jeff DeWit, the state treasurer, and Robert Graham, a former GOP state chairman. Both men are reportedly mulling a primary challenge to incumbent Sen. Jeff Flake, who has been a leading Trump target since last year:

Recently, the president has toyed with the idea of backing yet another primary challenger to Flake, Kelli Ward. He floated this idea on Twitter, of course.

"Trump checkmated himself," Republican strategist Melissa Salas Blair told Salon. "He's looking at a chessboard and there's no other moves. Now all he can do ... is just throw the chess pieces back in the air."

Ward has already started to move against Flake, with Trump's tacit support. On Friday, her campaign launched a web ad in which Ward says she's calling out Flake for being "weak" — after showing a clip of Trump saying that he had been told not to badmouth Flake during his visit.

"Right now you have a president who wants to go in and endorse people who are going against a seat," Blair added. "Party chairmen don't even do that. He's completely dissing each and every [Republican] chair around the country."

Longtime GOP strategist Rick Wilson said that he could only remember one instance of a Republican getting involved in a primary: when George H. W. Bush went against David Duke in Louisiana. He called this situation in Arizona "unprecedented."

The Ward-Flake battle may be considered a proxy war between Trump and the establishment GOP, as a Mitch McConnell super PAC came out against Ward, a physician who has appeared on Alex Jones' "Infowars" program a few times. And the Republican powerhouses are taking notice.

That means that Trump is getting involved in a battle for his own party — and he's going against everyone else in order to do it. What outrages Blair the most is that Trump is apparently trying to punish Flake over an op-ed the senator wrote last month.

"He has made an enemy now of Jeff Flake," Wilson said. If Jeff Flake does win re-election . . . any U.S. senator has enormous abilities to affect and influence policy. And Donald Trump will need things. He'll need votes, he'll need things from Jeff Flake.

Senators "don't work for Donald Trump," Wilson added. "They're not his employees. They're members of a branch of government with co-equal power. He's going to see that he hasn't just made an enemy. He's made a cluster of enemies."

The ways out are limited.

A primary challenge to Flake — one spearheaded by Trump and his allies — could turn Arizona into a major battleground over the Republican Party's future, Blair said. There will be no neutral ground available to anyone in the GOP, she believes: You're either with Trump, or you're against him.

"There are six or seven senators now, who, when Donald Trump says things, the response will be, 'Go fuck yourself,'" Wilson told Salon. "I suspect one of the senators who has reached his limit is this guy named [Senate Majority Leader] Mitch McConnell you may have heard of. Trump is forcing him to spend enormous sums of money now to defend his incumbents. He's always having to fight defense because of Donald Trump."

But Trump is learning that his political power is actually limited. Proof of that comes from Alabama, where the Trump-endorsed Luther Strange couldn't win an outright majority. Strange is in danger of losing a primary to challenger Roy Moore. "It's one thing to be an intimidating political leader," Wilson said. "It's another to deliver wins."

If Trump loses this battle, "He's going to throw Ward under the bus, as he did [with] everything else," Blair said. "He'll spin it as the story of a candidate who didn't follow his advice: "No wonder she lost."

But more importantly, if Donald Trump loses, his political reputation is likely toast.

"Once the bully gets popped in the nose really hard, the opinions of the bully start to change," Wilson said.

An elephant never forgets. And it seems that the Republican Party won't forget what Trump is doing, either.