For a primer on how to make fun of Nazis, look to Charlie Chaplin 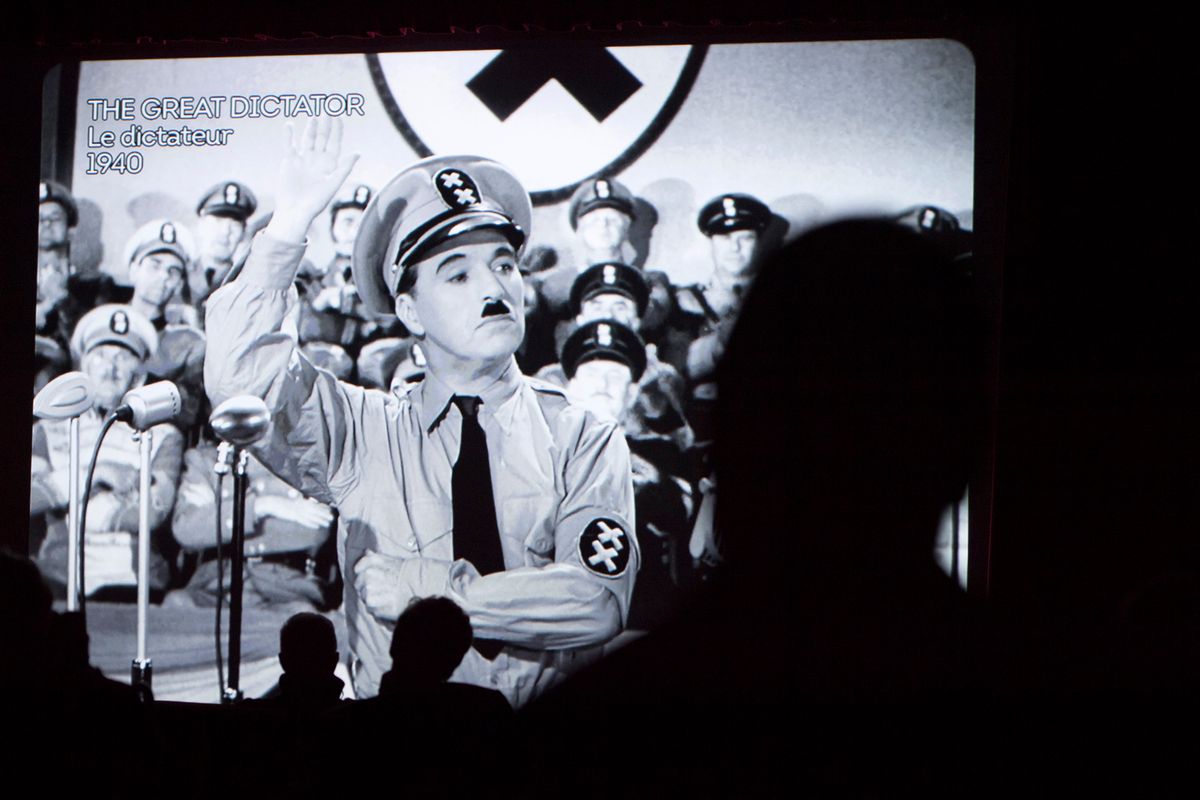 Spectators watch the movie "The Great Dictator" with actor Charlie Chaplin in the cinema during the inauguration and the opening of the museum "Chaplin's World by Grevin" at the Manoir de Ban, in Corsier-Sur- Vevey, Switzerland, Saturday, April 16, 2016. (Laurent Gillieron/Keystone via AP)
--

White nationalists and neo-Nazis are having their moment. Former Ku Klux Klan Imperial Wizard David Duke is back, yet again, in the media spotlight, while newer figures such as white supremacist Richard Spencer and Christopher Cantwell are broadcasting their views via social media feeds and niche internet channels.

Many Americans are wondering if this resurgent movement should be ignored, feared or fought. What, exactly, is the best antidote for neo-Nazism?

While the August 12 violence in Charlottesville, Virginia was no joke, the images of armor-clad, tiki-torch-wielding white nationalists did give fodder to late-night talk show hosts and editorial cartoonists.

In a different age, another ascendant white supremacist — Adolf Hitler — used a combination of garbled ideas, stagy phrasing and arch gestures to bewitch much of his nation, even as the rest of the world looked on in disbelief and terror.

While many anti-fascists offered serious and potent arguments against Hitler, comedians like Charlie Chaplin responded to the mortal threat that the Nazis posed in a different way: They used humor to highlight the absurdity and hypocrisy of both the message and its notorious messenger.

Chaplin homes in on his target

In late 1940, producer-director-star Charlie Chaplin released “The Great Dictator.” Often considered Chaplin’s last great film, “The Great Dictator” is the tale of a little Jewish barber in the mythical (but obviously German) nation of Tomania. The barber is mistaken for a dictator modeled after Adolf Hitler named Adenoid Hynkel, and the barber is forced to carry out his impersonation of the German warlord to save his own life.

The idea of a film satirizing Hitler was one Chaplin had been working on for years. Chaplin was a dedicated antifascist, and was alarmed at Hitler’s ability to captivate the German people. He warned members of the Hollywood community not to underestimate Hitler merely because they found him comical, an effect magnified by Hitler’s unfathomable decision to apparently borrow the most famous mustache in the world — Chaplin’s little black toothbrush — as his own trademark.

Chaplin regarded Hitler as one of the finest actors he had ever seen. (Hitler carefully monitored his public persona, studying photographs and film of his speeches, and taking lessons in public presentation.) Nonetheless, Chaplin, whose international success was based on little people challenging and defeating powerful institutions and individuals, recognized that comedy could be used against Hitler.

“It is paradoxical that tragedy stimulates the spirit of ridicule,” he wrote in his autobiography. “Ridicule, I suppose, is an attitude of defiance.”

Chaplin was warned in 1939 that the film might be refused release in England and face censorship in the United States. Political factions in both nations were anxious to placate the unpredictable, angry Hitler, and “The Great Dictator” could be calculated to enrage the Nazis, who reviled Chaplin as a “Jewish acrobat.”

But Chaplin was a partner in the distribution company United Artists; simply put, he was his own producer, and answerable primarily to himself when it came to risky investments. Due to Chaplin’s perfectionism, all of his films were expensive. “The Great Dictator” was no different: It cost US$2 million to produce, an enormous sum at the time. That perfectionism delayed the film’s distribution until the height of the English Blitz, by which time audiences in the U.S. and England were ready for Chaplin’s humor of defiance. In 1940, the year of its release, “The Great Dictator” was the third highest-grossing film in the U.S.

Much of the comedy of “The Great Dictator” comes from a merciless indictment of those who would follow such a patently idiotic character. The satire mocks Hitler’s absurdity, solipsism and overweening vanity, while also highlighting Germany’s psychological captivity to a political fraud.

All the techniques of the tyrant are on view: the arbitrary demonizing of identity groups, the insistence on mindless loyalty from his followers, the unpredictable behavior toward foreign leaders that ranges from mere abuse to deceit, even the hostility toward science in favor of dogma. (A series of inventors die while demonstrating the patently impossible military technology Hynkel demands, like a bulletproof suit and a parachute hat.) Hynkel is also a casual sexual harasser and grossly overestimates attendance at official functions.

Hynkel bloviates mindlessly and unintelligibly. U.S. and English audiences were already quite familiar with Hitler’s untranslated radio speeches, and Chaplin took advantage of this, making Hynkel’s speeches an amalgamation of gibberish, non sequiturs and vaudeville German dialect humor, as when he shouts, “Der Wienerschnitzel mit da lagerbieren, und das Sauerkraut!” (“The wienerschnitzel with the beer and the sauerkraut!”)

Would Hitler laugh at himself?

The artistic peak of this cinematic effort was the mordant Ernst Lubitsch comedy “To Be or Not to Be” (1942), in which Hitler is explicitly compared to a ham actor-manager who embarks upon a vanity production of — what else? — “Hamlet.”

Hitler was a huge movie fan, and after the war, novelist and screenwriter Budd Schulberg found proof that Hitler had actually seen “The Great Dictator.” More intriguingly, Hitler ordered the film to be screened for him a second time. (Of course, ordinary Germans weren’t allowed to watch it.)

Interviewed for a 2001 documentary, Reinhard Spitzy, an intimate of Hitler, said he could easily imagine Hitler laughing privately at Chaplin’s burlesque of him.

The image of Hitler watching “The Great Dictator” a second time — admiring the work of the only public figure whose sheer charisma before the cameras could rival his own — is a compelling one.

Chaplin later said that had he known the extent of the Nazis’ barbarity, he would not have burlesqued them; their crimes were simply too immense for comedy, however trenchant. But perhaps “The Great Dictator” still reminds us of political comedy’s golden mean: The more political movements strive to be taken seriously, the more ripe a subject for satire they become.