"Game of Thrones" recap: "The Dragon and the Wolf" is a satisfying end to an uneven season 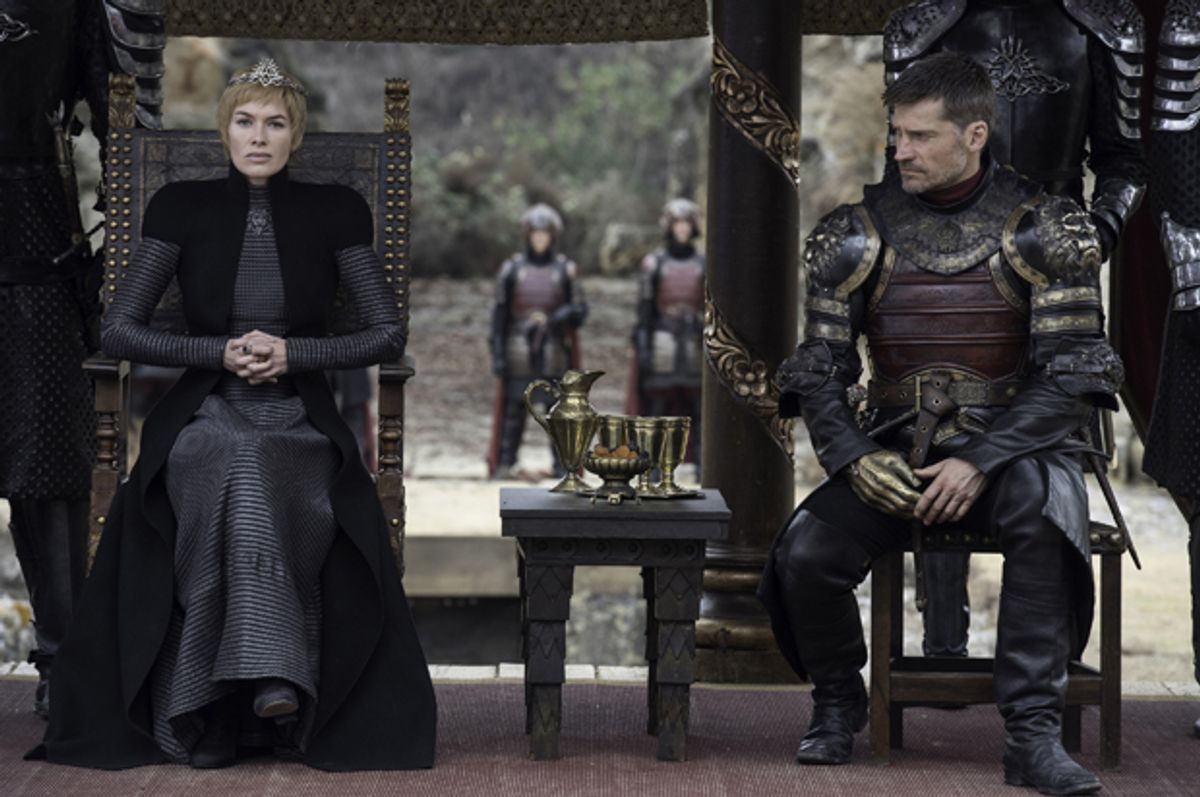 Lena Headey and Nikolaj Coster-Waldau in "Game of Thrones" (HBO/Macall B. Polay)
--

The seventh season finale of “Game of Thrones” proves the best episodes need not be dominated by explosive battles, arrows, swords and gore. Tension brings out the best in this cast and these characters. The rest is . . . well, it’s stupendous, frankly. We love it. That’s why this season’s penultimate episode, “Beyond the Wall,” remains watchable even though it was founded on an idiotic premise and violated everything we know about distance and traveling time and how fast Gendry can run across snow and ice in heavy furs and boots.

In contrast, every moment in “The Dragon and the Wolf” provides pretty much what devoted viewers wanted and expected, klutziness and all. As season cappers go, it doesn’t rate as highly as others; it lacked the pyrotechnic cruelty of “The Winds of Winter” and the balance of tragedy and awe of “The Children.”

But it sets up what one expects to be the final six episodes, with enough discomfort, anxiety and volatility to leave room for some measure of forgiveness for the string of insults to logic and common sense that marred most of this season. Like a decent entertainment partner, “Game of Thrones” staved off losing our love completely by delivering satisfaction where and when it counts.

It gave us a big death — one entirely easy to predict but gratifying nevertheless — and a culmination of a season’s worth of shipping, as Daenerys Targaryen (Emilia Clarke) and Jon Snow (Kit Harington) finally went heels to the Seven on a love boat to White Harbor. Many fans are rooting for these kids, even though they’re actually nephew and aunt. Only Bran Stark (Isaac Hempstead Wright) and Samwell Tarly (John Bradley) are aware of this fact, along with Jon’s real name: Aegon Targaryen.

Bran and Sam’s utility as convenient expositional tools is a prime example of the producers taking the audience’s patience and loyalty for granted this season. One functions as a human crystal ball whenever needed, which comes in very handy during this episode’s kangaroo court. The other just happens to pull the right books everybody needs out of the thousands upon thousands stuffed into the Citadel. He’s like a bloodhound, except with vital knowledge. Together they are history’s detectives, this series’ version of Wheels and the Legman, there to suss out that Jon is the true heir to the Iron Throne because he’s a trueborn legitimate Targaryen.

At the same time Bran is saying this, we see Jon plowing Dany like a cornfield, and we’d be skeeved out by that if sibling wives weren’t a Targaryen tradition and if Westeros weren’t already a land ruled by a woman pregnant with her brother’s child. As horrors go, twincest beats garden variety “Flowers in the Attic”-type incest any day. Also, aren’t you looking forward to defending this relationship to your friends, co-workers and your favorite church ladies? That’s going to be a laugh riot.

“The Dragon and the Wolf” grants an all-too-rare opportunity for Lena Headey to prove she has an emotional range beyond smugly smirking and showing her teeth with noble aggression. The scene between Tyrion Lannister (Peter Dinklage) and Queen Cersei (Headey) was nothing short of masterful, not to mention long overdue. The writers have always gifted Dinklage with fertile material, allowing him to display a range of emotional tones.

But here, director Jeremy Podeswa helps coax a performance out of Headey that reveals a rare vulnerability and humanity in the character. In an episode stuffed with reunions, this one demonstrated the strange, protective connection of pain and hatred that a bloodline can have. Cersei ends up committing to a selfish course of action in the end anyway, because what does an army of dead matter when there’s legacy on the line?

Besides, this small-scale shattering of illusion is nothing next to the Wall crashing down. No “Game of Thrones” finale is completely devoid of ye olde hack and slash, but this time the action occurs within the last 15 minutes as the inevitable happens. Undead Viserion, the new steed of the Night King, takes down the supernatural barrier at Eastwatch-by-the-Sea. Turns out the wight dragon spits blue flames, enough to ensure Season 7 closes with the dead pouring through the gap to head South.

Before this, “The Dragon and the Wolf” lays out a spread of pleasant surprises in unpleasant situations, beginning with characters long sundered by circumstance brought together again in the dragon pit outside the city walls. Tyrion reunites with Pod (Daniel Portman) and with Bronn (Jerome Flynn)! Euron (Pilou Asbæk) threatens Theon (Alfie Allen) and insults Tyrion, reminding us of how very badly we want Euron to die! In the way of so much of the seventh season, some of these get-togethers are entertaining in the moment, while others are overly indulgent, particularly when the Hound (Rory McCann) confronts his undead brother.

Then again, the Hound reconnecting with Brienne of Tarth (Gwendoline Christie) is just short of magical, as the two recognize the duel in which Brienne almost killed the Hound was over the same issue: protecting Arya (Maisie Williams). And when they realize Arya doesn’t need protecting anymore, both smirk proudly like the surrogate warrior parents that they are. One day she’s a lippy waif. The next she’s a master assassin, slicing an enemy’s throat in a single pass. Where does the time go?

In these moments “The Dragon and the Wolf” proves that a feature length episode can feel agile and substantial without being propped up by large-scale violence. The smaller bursts of blood are enough, and the still anxiety provides a sturdy base to support the craziness to come in the next six episodes.

But along with reunions, the other central themes of “The Dragon and the Wolf” are honesty, lies and truth. Jon Snow is honest, to a massive fault, and it loses him the Lannister armies. Cersei promises an alliance, but Cersei being Cersei, she admits her true intent is to leave the North and Daenerys high and dry and hire Golden Company, an army of 20,000 mercenaries from Essos to be ferried to Westeros by Euron.

In Winterfell, Sansa (Sophie Turner) comes clean with what many viewers suspected all along, that she and Arya have been working together to expose Petyr “Littlefinger” Baelish (Aidan Gillen) as the manipulative murderer that he is. In a twist Stevie Wonder could have seen coming, Sansa lists all of Littlefinger’s crimes before the men of Winterfell and the Vale, including his betrayal of Lord Jon Arryn and Lysa, who may have been bananas-bonkers but was still family.

Littlefinger is dead wood at this point, and gets his at the end of a subplot that made very little sense beyond proving, without a doubt, that the Starks remain a tight pack. The good news is that Arya and Sansa are, indeed, sisterly at last, and Sansa retains the Vale. Plus Arya now has a very useful new face to add to her collection. Everybody wins, except for Lord Baelish.

Theon Greyjoy is useless too, but grows a metaphorical pair just in time to lead a scraggly band of remainders back to the Iron Isles to rescue his sister Yara (Gemma Whelan). Of course he’s able to do this because he has no actual family jewels, so when a surly sailor tries to put him down by kneeing him where it no longer counts, he takes the opening and somehow beats the guy into submission. Not for his own honor, you see — for his sister’s.

And while D.B. Weiss and David Benioff clumsily wrote a few of the middle chapters and this episode pitting what appears to be a homicidal Arya against a quivering Sansa, the real dysfunction has always been with the Lannisters in King’s Landing. Season 7’s expansion of Tyrion’s character has been messy, but the dissolution of the alliance between Jaime (Nikolaj Coster-Waldau) and Cersei is palpable and dies tragically as the former abandons the latter at the episode’s end.

“We are a group of people who do not like one another,” Tyrion observes, succinctly summarizing what “Game of Thrones” has become as it heads into its final season. The fact that these noble men and women aren’t all friends is the reason “Game of Thrones” continues to command our attention, despite its stumbles in writing and execution.

HBO can still take its fan investment to the Iron Bank despite season 7’s missteps, if only because the six-episode eighth season promises to be a march of chilling monstrosity, poignant tragedy and heartbreak. “The Dragon and the Wolf” doesn’t retroactively make amends for a shoddily plotted seventh season, but it maintains our passionate curiosity to see how it all ends.